Virginia’s Green New Deal can be built on common ground between people of all political stripes, activists say 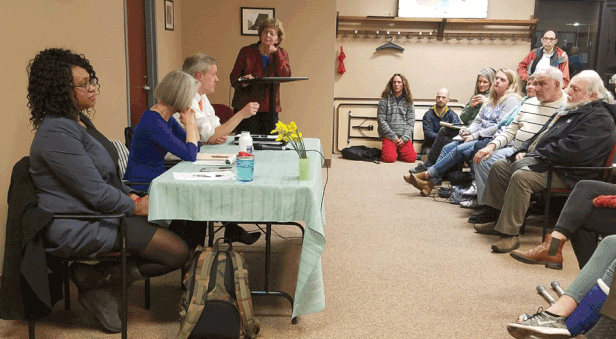 Virginia environmental activists, in an initial effort to lay groundwork for a state-level Green New Deal, urged residents of the Shenandoah Valley to find areas of agreement among people of disparate political philosophies in order to spark action necessary to halt climate change.

After all, the panelists told a crowd of 60 Wednesday night in the Rockingham County Administration Center, climate change requires urgent action.

“We’ve got to do something aggressive and out of the box,” said Karen Campblin, co-chair of the Green New Deal Virginia Coalition and Climate Justice Chair for the Virginia chapter of NAACP. “We’ve got 10 years to make significant change.”

That 10-year timeframe to revamp U.S. energy sources and power use, while also creating jobs among a host of other goals, comes straight from the Green New Deal resolution Democrats filed in Congress last month.

Campblin — along with Bob Shippee, legislative chairman of the Sierra Club’s Virginia Chapter, and April Moore, board member of the Chesapeake Climate Action Network — answered questions from a crowd of 60 on Wednesday night in the Rockingham
County Administration Center during their “Wake Up Virginia! Mobilizing for Our Climate Crisis” event hostedby the Climate Action Alliance of the Valley.

Because the national Green New Deal sets broad goals, the Virginia effort is in the early stages of seeking out areas of broad agreement and deep interest from as many voices as possible, the panelists said. That includes input from groups in education, health, transportation, agriculture and other sectors.

“We can’t do this alone. We need to share our knowledge, our resources, our stories,” Campblin said.

She said after this first phase of seeking out voices, building coalitions and mobilizing, there will be a summit on April 27 and the effort will shift to tackling policy.

The Green New Deal—borrowing its name from FDR’s initiative to pull America out of the Great Depression—aims to use a similar approach of using government investment to spur more resource efficiency and renewable energy— all as part of a broader effort to halt climate change. That includes transitioning to 100 percent renewable energy by 2030, according to the proposal.

The Green New Deal has drawn criticism from national Republicans for its potential cost, and aggressive goals to restrict use of fossil fuels within a 10-year context, prompting President Donald Trump to call it a “socialist” joke.

But Campblin said the concepts at the heart of the Green New Deal can actually connect people with different philosophies. She described the Green New Deal as a Venn diagram with three segments: economy, climate and social justice.

Supporters, she said, can work from the portion of overlap, using common ground to unite people toward a goal.

“We’re all fighting for the same thing,” she said, adding that incremental changes won’t be enough as climate continues to change.

When answering the question of whether climate change is “significant enough to warrant mobilization on the scale of World War II,” Shippee said he believed that, yes, it required an effort of that magnitude.

“[Everyone] needs to be pressed into service,” he said. “Capitalism doesn’t work in emergency situations.”

Shippee and Moore both shared their experiences working with what Shippee called “strange bedfellows” while making connections across barriers.

“Don’t hurt me, but I met with Americans for Prosperity,” he said, referring to the libertarian leaning political advocacy group founded by the Koch brothers. “And we ended up connecting on a lot of things.”

Moore said she connected tea party activists with members of the Green Organization to work for solar access in Georgia.

Shippee told those in the audience to seek out those areas of philosophical overlap.

“There’s nothing really radical here. We all want to be healthy, have a good economy. It’s not us vs. them,” he said.

Many members of the audience asked how individuals can make a difference in legislation. The panelists told them to start engaging and doing the legwork now.

“If you wait until January, it’s way too late. The legislators are swamped,” Shippee said. “Call them in the off season and call them often. Be noisy now.”

Campblin suggested giving letters a personalized touch, instead of copy-pasting a stock letter. “It’s the personal anecdotes that stick out.”

For those nervous about writing letters, demonstrating works too, Moore said.

“It all adds up. Do the things that play to your strengths and personality,” she said.

One major obstacle for passing green legislation, Shippee said, is the financial influence of Dominion Energy in Virginia politics. So far in the 2018-19 state election cycle, Dominion Energy has contributed $369,563 —  the sixth highest total of any political donor, according to data from the Virginia Public Access Project.

Moore said one tangible way to reduce Dominion’s influence is to support candidates in the primaries who refuse donations from Dominion, and to encourage incumbents to do the same.

Moore is also running as a Democrat in the 26thstate Senate District, a seat currently held by Republican Sen. Mark Obenshain.

Jill Zirkle, who recently returned to Harrisonburg after 15 years, said she is concerned about the environment and was encouraged by what she heard from the activists, overall. However, she said she wished they had gone more in depth concerning one of the audience member’s questions: how to deal with waste generated while cleaning up unsustainable infrastructure? “What do we do with the stuff left behind? They didn’t really talk about that,” she said.

Lindsay Curren of Staunton said the evening felt to her like democracy in action.

“Democracy happens in quiet humble meetings like this,” she said, calling it the “hard boring work” of being active citizens. Curren said when leaders invest their time in the local communities, “it’s a net positive for everyone.”