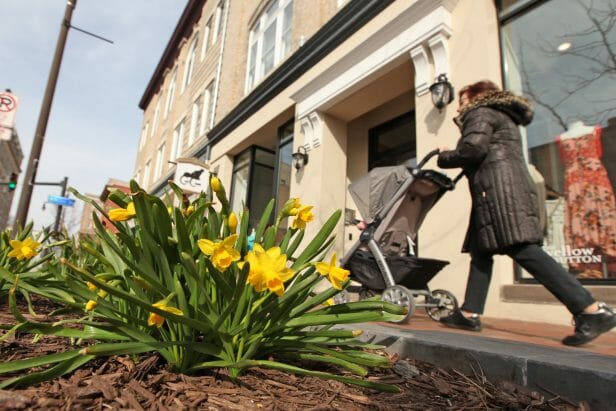 Miniature daffodils, a Narcissus species, have emerged in flowerbeds along Main Street around downtown Harrisonburg.

Maybe you have noticed the bright yellow daffodils dotting flowerbeds downtown or the little clumps of purple crocus popping up seemingly overnight? 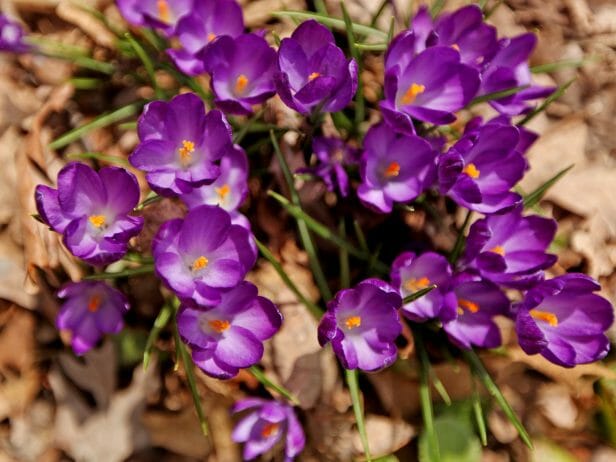 Jan Sievers Mahon, the director of JMU’s Edith J. Carrier Arboretum, said that the timing of spring flowers’ appearance can vary every year: “The hellebore [in the arboretum] just showed up. I think this is the latest I’ve ever seen them.” She can’t recall ever seeing the dwarf iris bloom at the same time as the purple crocus in the 11 years she has been the arboretum’s director. 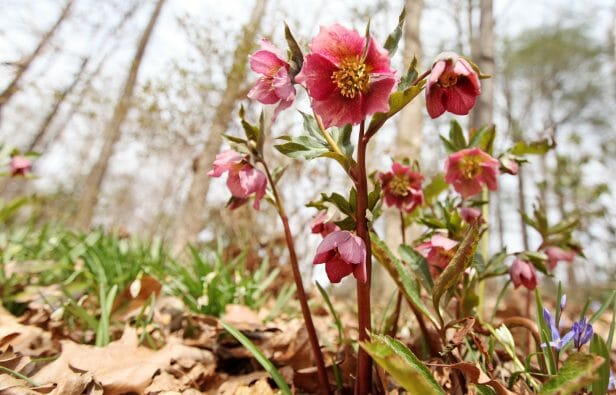 Hellebore, also known as Christmas rose, is a Helleborus species and is particularly late in blooming this year at the Edith J. Carrier Arboretum. 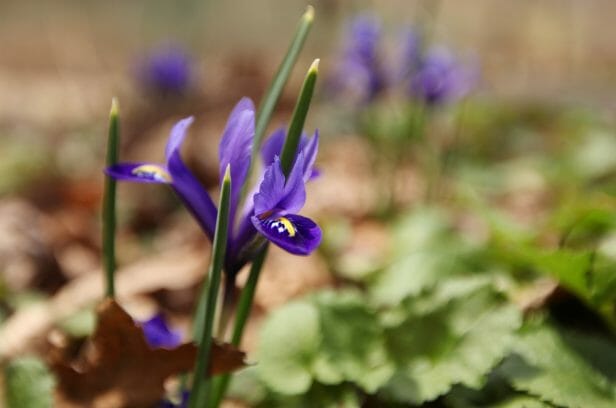 The delicate petals of a dwarf iris are open at the Edith J. Carrier Arboretum.

Despite a few warm spikes toward the end of winter, overall colder temperatures may have delayed these flowers’ emergence. Sievers Mahon said that other environmental factors, such as rainfall or natural cycles of the plants, can also affect when we start seeing them.

“Each year is different. Some years some flower varieties are spectacular, with there being an abundance of them. This is typical in nature,” she said. 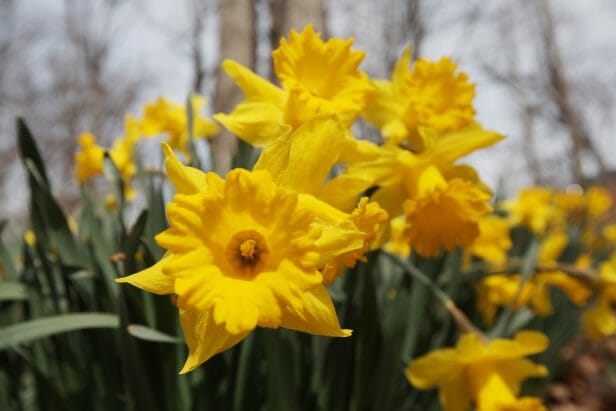 Daffodils are prolific throughout the Edith J. Carrier Arboretum.

Ants and water flow are responsible for carrying the seeds of many native wildflowers, spreading them to new areas.

“You often see flowers show up in places you’ve never seen them before,” Sievers Mahon said.

Flowers on slopes facing the south with good access to the sun’s warming rays usually get a head start. The native wildflower bloodroot only opens its petals when the sun is out. Though many flowers are tolerant of frosts and cold temperatures, extended periods below 32 degrees can damage many of their tender blossoms or foliage. 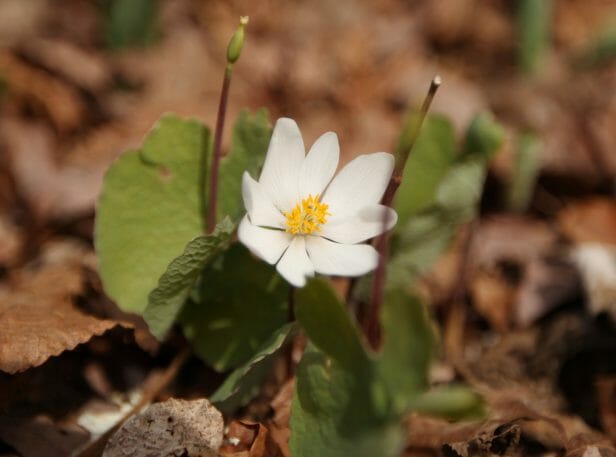 Bloodroot (Sanguinaria canadensis) is a native wildflower in bloom at the Edith J. Carrier Arboretum. 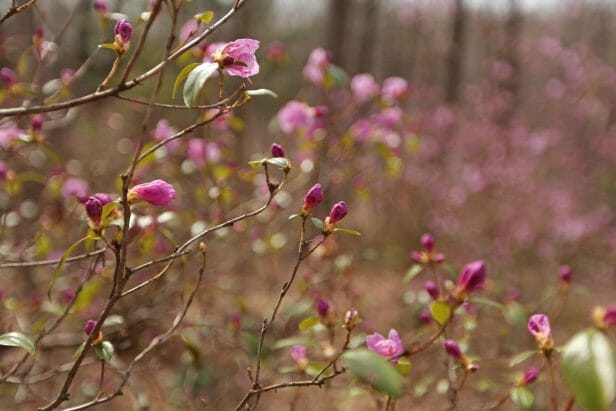 Korean rhododendron (Rhododendron mucronulatum) is a flowering shrub whose thin petals can be damaged by freezing temperatures at the Edith J. Carrier Arboretum.

Sievers Mahon said that arboretum staff have made an effort to remove invasive species such as garlic mustard, whose rapid growth and root toxins are harmful to native wildflowers.

Despite their seeming abundance around old homesteads and long-abandoned gardens, daffodils, grape hyacinth and crocus are not native to Virginia. On its website, the arboretum showcases the flowers that are in bloom each month and denote all the natives. 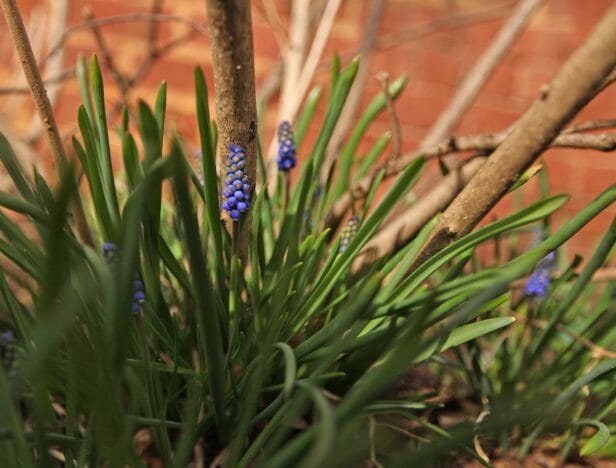 Grape hyacinth (Muscari armeniacum) springs up at the base of a dormant bush out front of Heritage Bakery & Café on S. Main Street.

While spring just began on Wednesday, several winter flower species around town are already fading, making way for the next season’s blossom displays. 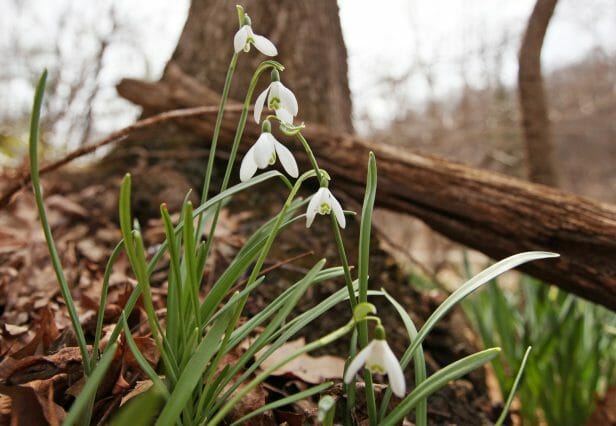 Snowdrop (Galanthus nivalis) begins to fade from being in bloom during the winter season at JMU’s Edith J. Carrier Arboretum. 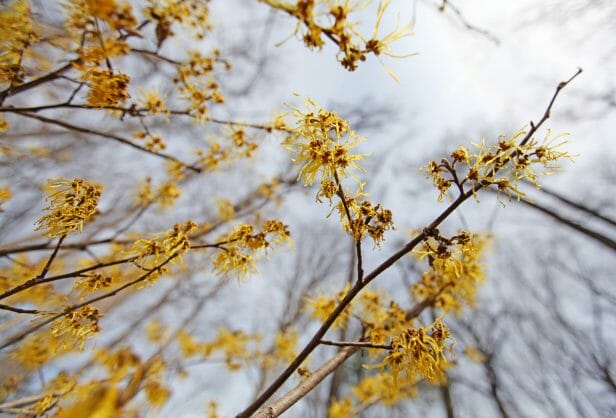 Witch Hazel (Hamamelis x intermedia ‘Jelena’) winds down from being in bloom during the winter season at JMU’s Edith J. Carrier Arboretum.