43 residents displaced by Southview Apt. fire. No one hurt, at least one pet killed — but one dog was reunited with owner 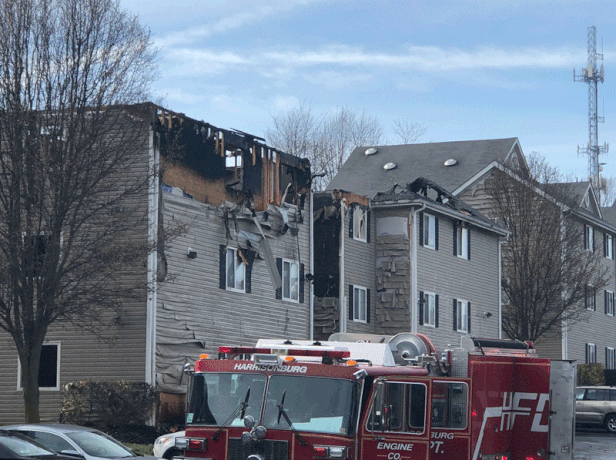 The aftermath of the fire at 1083 Lois Lane in the Southview Apartment complex shows the roof, attic and third floor of the building largely destroyed after the March 28 fire. (Photos and video by Bridget Manley)

By Bridget Manley and Ryan Alessi

More than 40 residents — nearly all of whom are JMU students — were displaced after a fire started on the first floor of one of the Southview apartment buildings and eventually engulfed the entire structure Thursday afternoon.

No one was hurt, but at least one pet was killed and others are still unaccounted for because firefighters still can’t get into the building’s third floor that’s too unstable, Harrisonburg Fire Chief Ian Bennett told The Citizen. Firefighters also couldn’t let residents, many of whom weren’t home when the call about the fire was placed at 12:06 p..m., into the building to rescue their pets while the fire still burned.

But once the fire was under control, firefighters did find a four-legged survivor.

“The best feel-good portion of the story was we were able to get a dog out of the first floor toward the end of the incident that had survived in the first floor and reunite with the owner,” Bennett said. “It was very nice to see that.”

The five-alarm fire brought units from Harrisonburg and across Rockingham County — including Bridgewater, Elton and Clover Hill — as well as Augusta and Shenandoah counties. Many of the firefighters were on the scene for about six hours.

Bennett said one fire truck will remain there with a crew overnight.

“There are a couple places we’ll do an overhaul to make sure all the hot spots are out,” he said.

Meanwhile, investigators were just beginning their work  Thursday evening to determine a cause. It’s still too early to even know how long the investigation will take, whether it’s days, weeks or even months, Bennett said.

“We have crews beginning the investigation process now. But I don’t anticipate that being (done) any time soon,” he said.

What they do know, so far, is that the fire started somewhere one the first floor. Then it “ran up the vinyl siding on the outside and then came in through the attic, burned down through the third floor,” Bennett said. “The third floor is a loss. The first and second floors have a lot of damage to them at this point.”

Bennett said 43 people were living in the 12 apartments in the building. The apartment’s management company had arranged places for the residents to stay Thursday night, he said.

JMU issued a statement saying its Office of Residence Life also “stands ready to support student(s) who have been displaced by the fire” and encouraged students seeking mental health services to contact the university’s counseling center.

“The university is in the process of reaching out to each affected student individually to address their specific needs,” the statement said. That includes offering on-campus housing and programs for “text book and supply replacement, computer loans and short-term cash loans.”