Sacred-music lovers gather to sing from the Harmonia Sacra, a hymnal first published in Virginia before the Civil War, at the Virginia Mennonite Retirement Community on February 3.

On New Year’s Day, about 370 people gathered to sing at Weavers Mennonite Church just west of Harrisonburg, and several hundred more listened in by phone. While most participants arrived by car, some Old Order Mennonites came by horse and buggy, helping keep alive the area’s long tradition of a capella singing from a hymn book called the Harmonia Sacra.

The event at Weavers Mennonite was the 117th annual Harmonia Sacra singing there. First printed in Winchester in 1832, its publisher, Joseph Funk, later opened a printing press in Rockingham County, producing tens of thousands of copies in Singers Glen (a community named in recognition of its once-prominent musical scene).

Although Funk was a Mennonite, the Harmonia Sacra is an ecumenical hymnal, without a home in any particular Christian denomination. Still, most participants in modern Harmonia Sacra singings are members of Mennonite or Brethren churches.

And as the singings continue, at least one of the Harmonia Sacra’s most popular songs will soon find new life in print, in a forthcoming Mennonite hymnal that Harrisonburg-based MennoMedia plans to release next year.

Back from the brink

When Ken Nafziger, professor emeritus of music at Eastern Mennonite University, moved to the Shenandoah Valley in 1977, the Harmonia Sacra singings “were pretty near extinction,” he said.

“The very first ones I attended were very small gatherings. It seemed to me it was a very closed society,” Nafziger said. “Certain people were asked to lead [hymns] and they always led the same ones.”

Since then, however, there’s been a resurgence of interest in the singings, which Nafziger says “appeal to Mennonites and a broader hymn-singing folk.”

Sam and Jan Showalter grew up attending Harmonia Sacra singings with their parents and are committed to keeping the tradition alive.

Showalter, the local singing organizer and participant, says the tradition got a boost from two popular movies that featured shape note singing – O Brother, Where Art Thou?, released in 2000, and Cold Mountain (2003).

A Feb. 3 singing at the Virginia Mennonite Retirement Community attracted about 75 participants. Although most were gray-haired, a small-but-dedicated group of younger singers was there as well. Among them was Andrea Knight, a music coordinator for Weavers Mennonite Church who has created instrumental and choral arrangements of Harmonia Sacra songs for worship services.

Andrea Knight, a music coordinator at Weavers Mennonite Church, tries not to miss any of the local singings.

“I love that [the singing] includes the whole spectrum of Mennonites,” said Knight, who attended  singings with her mom while growing up.

The youngest singer at the February gathering was Joseph Wilkins, 17, who came with his mother, Carmen Rexrode.

“It’s a chance to sing with a very good group of singers,” said Wilkins, who attended his first singing at 18 months old and now sings bass.

The two are Methodists from Milam, W.Va.; Rexrode found several copies of the Harmonia Sacra, including an edition published during the Civil War, in the attic of her family homestead. 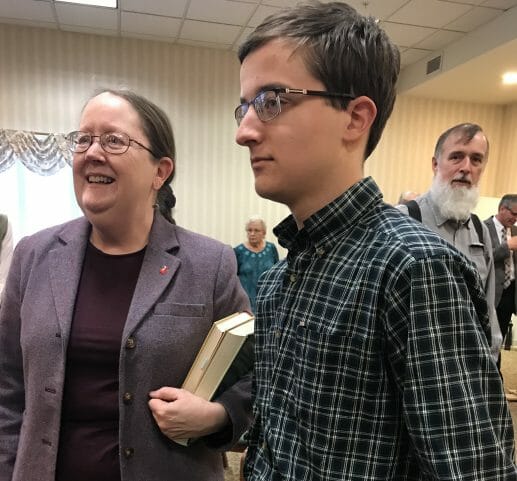 Seventeen-year-old Joseph Wilkins has been accompanying his mother, Carmen Rexrode, to Harmonia Sacra singings since he was a toddler.

Popularity of “Dedication Anthem” among Mennonites

Nafziger remembers when “Dedication Anthem” was introduced to Mennonites beyond Virginia, at a conference in Oregon soon after its publication in the 1969 hymnal. “It was the most magnificent sound I had ever heard,” he said. “It was like being in a thunder cloud. All these voices. It was not like anything I had ever heard in church before because not everyone was singing the same words at the same time.”

A recording of “Dedication Anthem” from the Jan. 1, 2019, singing at Weavers Mennonite Church.

But Nafziger cautions that some Mennonites have made too much of what he considers to be a wonderful song.  “It was a show piece—‘Look what we can do.’ People would come back from tours and say how they had sung it in a salt mine or church… I had nothing against the song itself, but it became an icon that was too big.”

When he was editing the 1992 hymnal, people repeatedly asked Nafziger if “Dedication Anthem” would be numbered 606 once again. “It was an annoying question but I think people were asking, what was going to happen with the tradition of singing?” Congregations had started to move away from using hymnals and were singing from text projected on a wall, he explained, and it was a legitimate question for people to wonder if a tradition of hymn singing would remain strong.

Nafziger notes that the “Dedication Anthem” didn’t originate in Virginia. First published in Boston in 1830 in Lowell Mason’s Handel and Haydn Society Collection of Church Music, it was added to the 15th edition of the Harmonia Sacra in 1876 (the hymnal now has 27 editions). Nafziger said the song has also been published in an African Methodist Episcopal hymnal.

In any case, the song’s popularity is such that it is the only selection that MennoMedia has announced for its new hymnal, Voices Together, scheduled for publication in 2020. An arm of the Mennonite Church in the U.S. and Canada, MennoMedia has raised more than $700,000 to create the hymnal and related worship resources, said MennoMedia Executive Director Amy Gingerich.

While the rest of the new hymnal’s lineup is a closely guarded secret, Gingerich said “606” is the only song promised to “be there somewhere.” The song has such a rich history among Mennonites, she continued, that the fundraising effort for the new hymnal was called Project 606.

Once used for singing schools, hymnal is an important piece of local history

Joseph Funk (1778-1862) first published what is now known as the Harmonia Sacra in 1832 in Winchester, Va., under the title, Genuine Church Music. It wasn’t until the fifth edition, published in 1851 in Singers Glen, that the name Harmonia Sacra was used. Funk lived in Singers Glen and had set up a printing press there in 1847. The hymnal used a system of shape notes that Funk customized for teaching in singing schools in the Shenandoah Valley (shape notes are an alternative form of musical notation that uses shapes rather than the five-line staff to indicate tone). 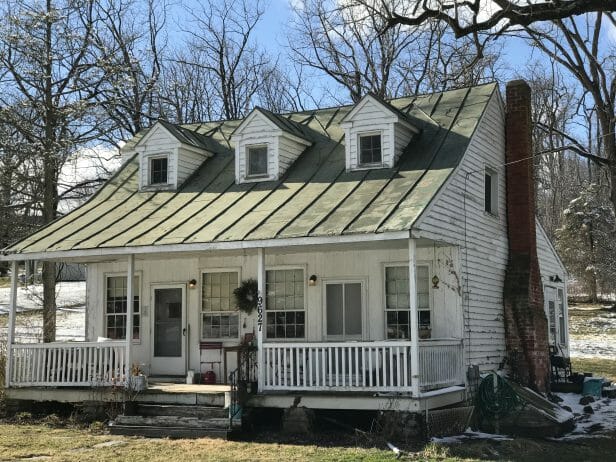 The Joseph Funk house in Singers Glen was built in the early 19th century; Funk and his family printed up to 100,000 copies of his Harmonia Sacra in a since-demolished building on the property.

In 2009, Funk’s house in Singers Glen – the first built in the community – went up for sale. Sam Showalter organized 10 couples to come up with a down payment and created an LLC to buy the house from some of Funk’s descendants. The group bought the house for $125,000 and have so far raised about $15,000 toward that cost, Showalter said. He also created The Harmonia Sacra Society in 2011 to raise funds to preserve the building and turn it into a museum about the Harmonia Sacra and the Funk family. The house – which was built about 1804 and listed on the National Register of Historic Places in 1975 – is now being rented out to cover expenses.

“It has an important history,” Showalter said. “That’s the site of the first Mennonite publishing company in the new world.” He estimates that 80,000-100,000 hymn books were printed on the property from 1847 to 1878 in a log building, which was demolished in 1918.

Phil Yoder, who is a regular at singings, says some of the songs from the Harmonia Sacra have “great theology.”

The lyrics of many Harmonia Sacra songs harken back to another era, speaking of suffering on earth and promising a release from hardship in an afterlife. Phil Yoder, 26, who attended the February Harmonia Sacra singing, interprets passages about escaping to a heavenly world figuratively, not literally, and appreciates the “great theology” of many of the songs.

He flips open his copy of the Harmonia Sacra to a hymn called “The Desolation of the Church,” which he finds meaningful because “it doesn’t make an idol of the church.” Yoder reads aloud a line: “And has religion left the church?”

“It expresses the grief of what is common to every age,” he said. “The church is always dying and being renewed.”