As 1st stretch of Northend Greenway is finally under way, plans begin for a ‘community build’ to construct 2nd phase 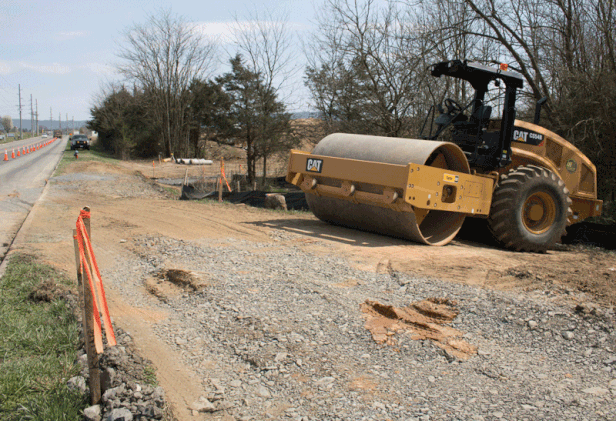 The construction firm Momentum Earthworks has begun preparing the site for the Northend Greenway starting near the intersection of Route 42 and Mt. Clinton Pike.

After eight years in the works, the first stretch of the Northend Greenway path between the EMU area and downtown is finally under way.

In fact, organizations who have supported the Northend Greenway project have scheduled a celebration for Saturday, April 6, from 10 a.m. to 12:30 p.m. That celebration, co-hosted by the Shenandoah Valley Bicycle Coalition and Vine & Fig at 715 N. Main St., will include a tour of the first part of the path that’s under construction, and lay the foundation for a community build of the second phase.

Tom Hartman, Harrisonburg’s director of public works, said “hopefully if we continue to have dry weather … our goal is sometime in June” for Phase I of the path to be complete.

The Northend Greenway will be a 2.5 mile shared-use path which will provide a safe way for people on the north side of Harrisonburg to travel to downtown and to other locations like Eastern Mennonite University by means such as walking or bike riding.

The first phase begins at the intersection of Mt. Clinton Pike and Virginia Avenue to the end of Suter Street near North Liberty Street, where it then parallels Blacks Run, according to the Harrisonburg city website. This stretch is funded by Virginia Department of Transportation’s Revenue Sharing Funds and matched with city funds.

The city hired Momentum Earthworks to build that segment from Mt. Clinton Pike to Suter Street.

The second phase will take the greenway from Suter Street along Black’s Run through the north part of downtown and end at the intersection of Main and Johnson, according to the project map that has been available since 2015.

The concept of a greenway, as well as preservation of the six-mile-long Blacks Run creek, actually goes back decades. For instance, a Feb. 7, 2002, article in EMU’s newspaper The Weather Vane, reported at that time that a two-year-old group called the Blacks Run Greenway Partnership, had begun reaching out to landowners along the creek. And the idea, according to The Weather Vane article, actually had its roots since volunteers began organizing to clean up Blacks Run starting with the first Earth Day in 1970.

Over the last eight years, the path to completion has meandered through numerous roadblocks, as local government and various advocacy organizations worked to support it. In 2011, community activists formally urged the city council to include plans for a greenway in the northern part of Harrisonburg to be included in the “City Bicycle & Pedestrian Plan.”

Kyle Lawrence, executive director of the Shenandoah Bicycle Coalition, said he’s “been in the orbit of it since the beginning,” working to support the pathway.

Lawrence said while he’s been frustrated that it has taken so long, there’s been no specific hold-up.

“The city government wants to do the right thing,” he said. He credited the city for obtaining matching grants from the Virginia Department of Transportation.

His frustration however, comes from what he calls a lack of prioritization by the city, which he identified as the key reason why this project has taken so long.

And the second phase of construction is facing a similar challenge — especially with the funding.

“No schedule or funding for Phase II has been determined yet,” according to the city of Harrisonburg’s website. Hartman said “funding always seems to take the most time.”

Because there is no timeline for that phase, Lawrence said it might require community members doing the construction — picking up shovels and laying gravel — instead of waiting for the city.

To get involved, Lawrence said the most important aspect is community members staying informed and paying attention.

“Fundamentally for the bike coalition, we believe that people out of cars, walking or biking, makes for stronger, healthier communities,” he said.

Hartman said it does represent another option for the future of Harrisonburg transportation. It will provide “an amenity to our citizens to provide them a safe way to get some exercise.”

Merridy Gnagey, who grew up in Harrisonburg and returned to the area with her husband and two children a few years ago, said she’s thrilled to see the Greenway open soon.

“We moved from Philadelphia, where we were able to walk and bike pretty much everywhere,” she said. “I’m excited to see Harrisonburg make progress to be more walking and biking friendly.”

But Gnagey said what she envisions it becoming is more than just a bike trail.

“I’m envisioning biking along the stream and being able sit and take breaks along the way,” she said. “I think making progress with the Greenway is such an important move for Harrisonburg.”