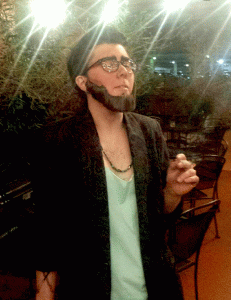 The author gets into character before performing in The Gem. (Photo courtesy of Rehana Franklin)

By Randi B. Hagi

I slipped into the basement of Clementine cafe behind what appeared to be a small drag queen entourage shortly before 9 p.m. one Saturday night. A fake beard plastered to my face. A confetti cake in hand.

I’d been preparing for a few weeks for this evening, when I’d compete for a spot in an ongoing performance art (but, mostly, just drag) competition, “The Gem.” The queen ahead of me, her assistant, my friend Kathryn and I ducked into the fluorescent-lit and stainless steel kitchen prep room that would serve as our dressing room before the show — a show that had sold out the day before.

This was my second public performance as a drag king, although I’d been appearing at friend’s parties dressed as theatrically male for years. I had practiced my routine for a few weeks beforehand – a rakish dance and lipsync number to “Cake by the Ocean” by DNCE that did involve an actual cake. I had a recurring intrusive thought that I might stumble and drop the cake, which would then splat! into an unusable patty. I set it under a prep table.

I shimmied into the back corner with my friend, who adjusted my paisley blazer and offered advice on arranging the sock in my pants for a more realistic genital bulge.

“Your makeup is amazing!” Kathryn told the large queen who had set up her cosmetic battle station next to us. She thanked us graciously and told us to place her mirror so that we could share it. I didn’t know this kind and hefty performer who was donning a sequined black-and-yellow striped bodysuit, looking every inch a goddamned Queen Bee. Turns out she was Eureka O’Hara, the self-dubbed Elephant Queen, who had competed on two seasons of “RuPaul’s Drag Race.”

A beer had barely quelled my pre-performance jitters, and I looked longingly at the empty Fireball shot glasses lining the prep tables before the queens, but I didn’t want my stomach sloshing with cinnamon as I cavorted around onstage later. I swapped air kisses with the few queens I knew and then locked myself in the bathroom to practice handstands.

Close to 9:30, the contestants gathered on the back patio – there were nine of us, and nine spots available to advance to the next round, so tonight’s “blind audition” was to be more of a fun celebration of debauchery and talent.

We’d be sorted into three “teams” each led by a veteran of the Virginia drag world, who would advise us before the next round. I inhaled a cigarette, practiced one more handstand to the applause of passersby, and Rehana took a few photos of me, documenting the facial consequences of stage fright. I was the last contestant on the docket, so I had some time to kill, which I spent flitting up and down the stairs, watching the other performers, and being asked if I was “okay.” 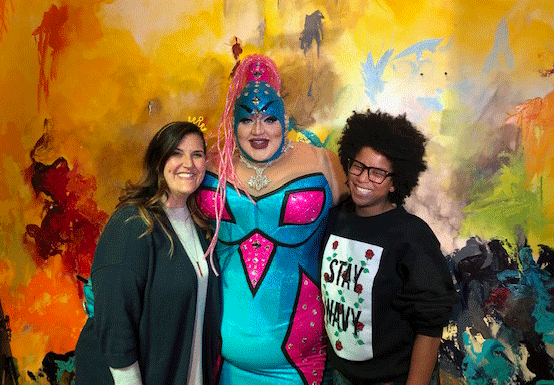 Professional queens performed between sets of contestants; the contestants were each “claimed” by a coach when one or more of the them coyly raised a pink, be-glittered fan. Perhaps seating was a little awkward for folks to see the stage, or the audience wasn’t drinking (false), or maybe I was wearing rose-colored glasses, because the audience seemed lukewarm compared to the Artful Dodger crowds of yore, when the attendee screams were deafening and the low lighting made everything seem a bit more salacious.

I only caught glimpses of Jayda Knight’s fierce pout and Angelle Zhané’s man-slaying windmill arm choreography. I did manage to watch a few of the other competitors’ acts, some of whom came from as far as Roanoke for the event. Ceberus was the first contestant up, which was hardly fair to the rest of us because he stoically busted out a Matrix-style dance number, with movement more akin to liquid than flesh and bone. Brooklyn’s curves were surpassed only by her attitude. Cyanide turned out backbends, handstands, and generally contorted her limbs in such a way as to make a gymnast (not to mention myself) blush. Servers bustled around with plates of food, full and empty beverages, and general expressions of shell-shock.

Finally, the time had come – my mint green skinny jeans clinging, face contoured, hair sprayed, palms sweating, I trekked to the stage with my confection under a black cloche as the first sensual pop beats of “Cake By the Ocean” played over the speakers. For all my compulsive practicing, the handstand was not my best. Carrying on, I spun, I rolled, I shimmied and shook, and the few folks I could see in the front row began to smile wide – but what took five minutes alone in my room seemed like one onstage.

A “reveal” is, in my opinion, one of the finest traditions of drag; often, a queen will whip off a modest, flouncing garment to reveal something jewel-toned and form-fitting underneath. My reveal was the aforementioned confetti cake, which I plunged a hand into and shoved on my face as part of my finale. But I had only mimed this part in practice, and was not prepared for how the real life cake would react to this gesture, which was to explode all over the front half of the stage, splattering the first row and maybe also the emcee. He was royally pissed and told me the show wouldn’t continue until I cleaned up the floor.

The last spot available was on coach Neveah Symone’s team, which really worked out well for me, given as many glowing things I’ve heard about her as an entertainer.

The evening closed with a few words from Kim Whetzel, director of Care Management at Harrisonburg Community Health Clinic – the program formerly known as Valley AIDS Network that provides free rapid HIV testing, financial and food assistance, medical education, and peer support to HIV positive clients. Rhinestone Productions, the drag company putting on the whole shebang, had held a brunch event earlier that day which raised $700 for the program.

The lights came on, a drunk Millennial fawned over first Kathryn and then a queen. Well-dressed Gen X-ers lined up to take photos with Eureka. And I gathered my things to go.

My friends were detained in the prep room by a very excited chef who showed us his corn and radish sprout operation – the little green corn slips surprisingly sweet – and then we headed out into the night, in search of cool air and a bar not overrun by students.

The next round of The Gem is on April 20, 9:30 p.m., at Clementine Cafe. More information available at www.facebook.com/RhinestoneProductionsVA.

Randi B. Hagi is a regular contributor to The Citizen.