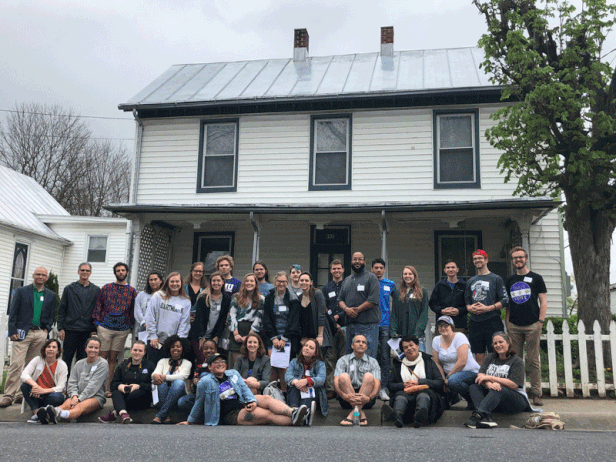 The participants in the Arc of Citizenship tour in front of the Dallard-Newman House on Sunday, April 14.

The destruction of an entire community in the name of urban renewal.

The papered-over stories of racial terror and the almost forgotten lynching of a young woman in town.

The whitewashing of a famous historical home.

Even the myth that “slavery wasn’t prevalent in Harrisonburg.”

These sagas — along with stories of black excellence and the description of a community that persevered over and over against the injustices of racism — are what emerged from the Arc of Citizenship, a two day event this weekend. The Saturday and Sunday tours and talks were an attempt to reveal truths buried by long-held false historical narratives and forge a stronger understanding of the history of how race relations has affected the Valley.

More than 30 JMU students, teachers and community members participated in the tours, visiting James Madison’s Montpelier and various locations in Harrisonburg in an effort to better understand the contributions and history of Black Americans throughout local history. The two day event, sponsored by the James Madison Center for Civic Engagement and the Northeast Neighborhood Association, sought to highlight historical sites in Harrisonburg to “develop a better understanding of the connections between the struggles for freedom, rights and equality.”

The “Not Thomas Harrison House” 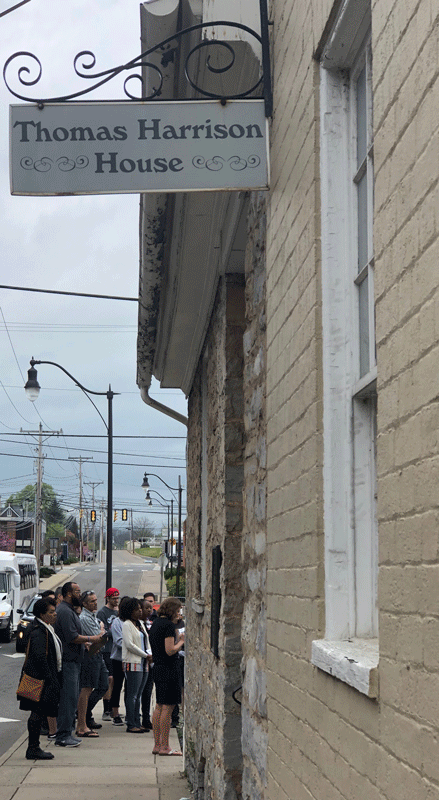 Sunday’s tour was led by Steven Thomas of the Northeast Neighborhood Association. It began at the site of the “Thomas Harrison House.” The house, thought for decades to be the home of the founder of the city, was recently revealed to have been built years after Harrison’s death.

The question of what the house will be called and how it will be used is still unanswered. Questions also remain about how the history of the home was whitewashed over the last two centuries.

One attendee asked about the renaming of the house, saying “is there a conversation about what that name could potentially be?”

“I have no idea, but that would be the obvious next thing,” said Meg Mulrooney, JMU’s vice provost for university programming and a history professor. “What are we going to call it while we figure out what to do with it?”

A walk through the Northeast Neighborhood 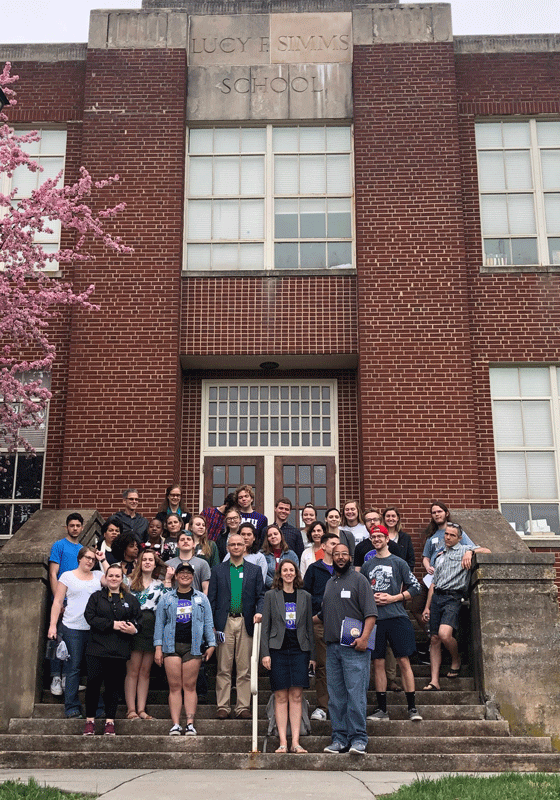 The historical markers and buildings that line the streets of the Northeast neighborhood and tell the stories of black excellence.

Lucy Simms, who born into slavery in 1855, attended Hampton Institute and became a beloved educator in the Valley in the late 1800s and early 1900s.

Edgar Amos Love, born in Harrisonburg in 1891, attended Howard University and co-founded Omega Psi Phi, one of the largest black fraternities in America. 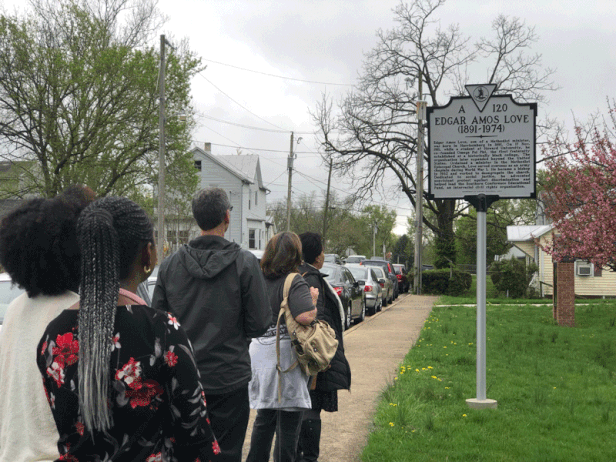 The formerly enslaved Ambrose Dallard family, building one of the first homes in what would become Newtown, a thriving neighborhood for then free former slaves.

The streets also bear the scars of a neighborhood disrupted by racism and apathy as the city moved to annex and then destroy the neighborhood in the 20thcentury. 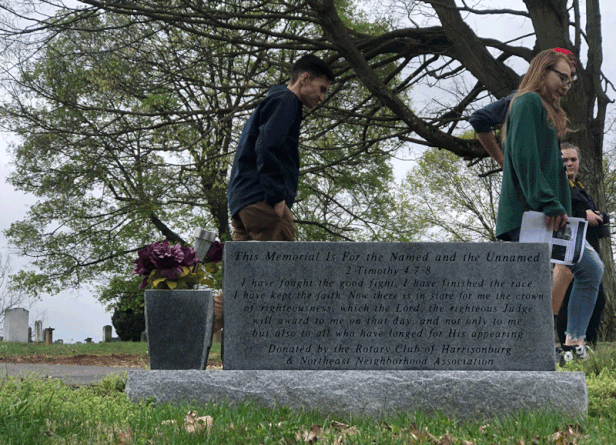 Newtown Cemetery, which was listed on the National Register of Historic Places in 2015, was established in 1869. The cemetery, now 150 years old, was established when a group of trustees purchased land in Newtown, an African-American community northeast of downtown Harrisonburg, to open a cemetery for “all persons of color.”

Thomas pointed out the gravestones sitting close to the curb, noting that many of the graves were bulldozed and paved over to make way for the street. 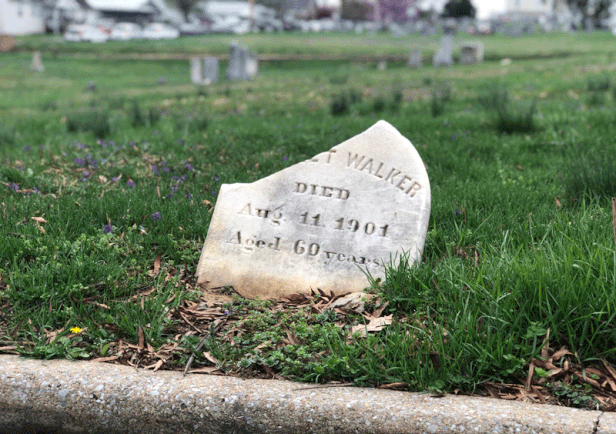 It was part of a larger tragedy happening in the city during that time — the city’s plan for “urban renewal.”

According to NENA, “homes of both whites and African-Americans were demolished or burned, but more than 60 percent of the destruction impacted the African-American community.”

Preserving history and regaining what was lost

The community gardens in the Northeast Neighborhood emerged to allow residents to grow vegetables and feel ownership and a connection to the land, Thomas said. 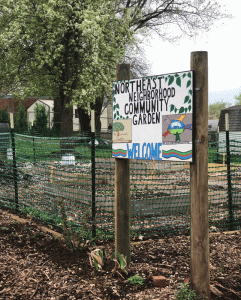 It’s one of the Northeast Neighborhood Association’s initiatives to make the community more unified, safer and emotionally invested, Thomas said. He pointed to the weekend’s events as a chance to engage with JMU students and hopes that this will lead to other opportunities to share history with students of every age.

“For me personally, I don’t want African American history to be forgotten.”

One of the few homes left standing after urban renewal was the Dallard-Newman House.

The Northeast Neighborhood Association purchased the home with plans to turn it into a museum to tell the history of the African-American families in the area and become the association’s headquarters. 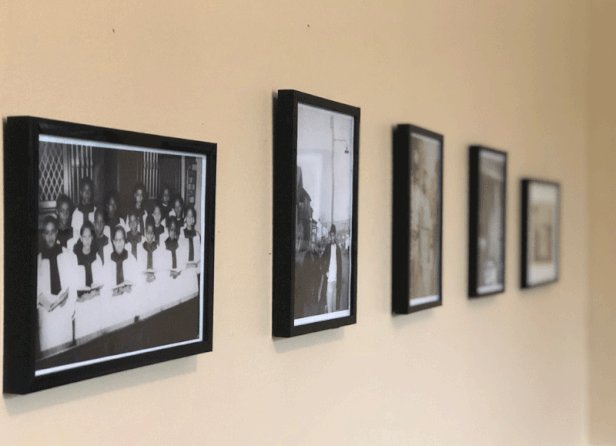 One of the prevailing false narratives that emerged in the years following the Civil War, Mulrooney said, was the notion that slavery wasn’t as persistent in Rockingham County and Harrisonburg. She said that belief was wrong. Slavery was common here, she said.

Charlotte Harris, a black woman being held in the county jail for allegedly instigating a barn burning, was lynched by a mob on March 6th, 1878.

The lynching was all but buried by history, until a professor at JMU made the discovery and community members at the Northeast Neighborhood Association moved to properly memorialize Harris and the racial terror that affected the city during the Jim Crow era. 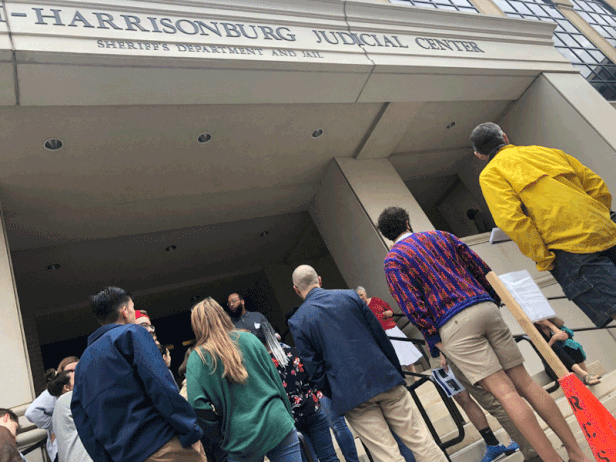 During the ceremonial stop at the city jail, Thomas described Harris’ murder in 1878 , and he told the group that the state of Virginia is trying to document each instance of people terrorized and murdered during the Jim Crow era.

“The stated goal is to bring awareness and recognition of this history to communities across the state, and such awareness might contribute to the process of healing and reconciliation of Virginia’s still wounded communities and families affected by lynchings,” Thomas said.

The Northeast Neighborhood Association is currently in the process of working with city officials to place a historic marker in Court Square to memorialize Harris. 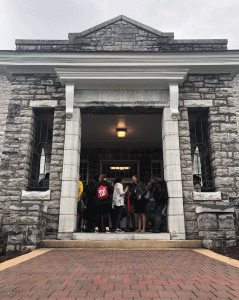 The final stop on the tour was James Madison University’s campus. Mulrooney described historical aspects of campus life, including instances of racism as well as efforts to better highlight the achievements of African Americans.

The university began as a teaching school for white women. Three halls on campus are still named after Confederate generals after being renamed in 1917 as part of an effort by some, particularly in southern states, to recast the Civil War using “the lost cause narrative.

In the early part of the 20thcentury, the university held minstrel shows that black custodians — such as Robert Walker Lee, who lived on campus and was responsible for cleaning all facilities — would have to clean up after, Mulrooney said.

“He was literate, he could read and write, and would leave ‘intriguing messages on chalkboards,” Mulrooney said. “But he had to be very careful working within this space of the Jim Crow south, because this was a white female institution…He would not have been allowed to look white students or faculty in the eye, he could not address them first, he could only speak after they spoke to him.”

Mulrooney also noted that residents of Newtown undoubtedly would have helped build the buildings on campus.

She also told a story about an African American teacher, Willie Nickens, who wound up as a laundress on campus. In an interview in the 1970s, she told the story of a student who wasn’t who she said she was.

“I’d heard about these sites before,” Garnder said. “But actually walking through the spaces, knowing these histories…it makes me a much more knowledgeable citizen of the county and of the city.”