They lived to quack another day 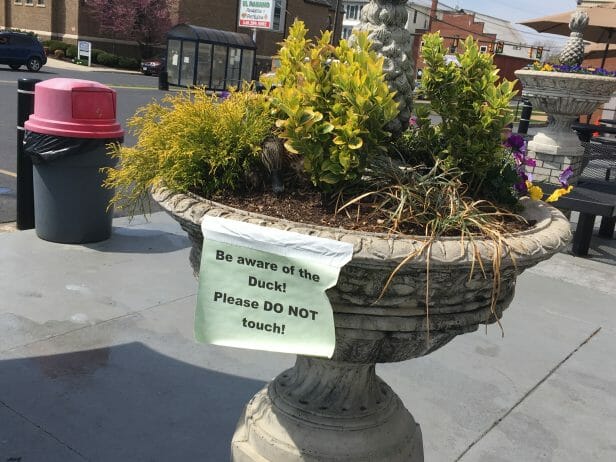 Tricky spot for ducklings to leave the nest.

At some point last Saturday – it’s a little unclear exactly when because it was busy that day – a newly hatched flock of ducklings lined up at the edge of a chest-high planter outside Kline’s Dairy Bar and jumped to the concrete below. It’s quite a leap for the fragile, fluffy peeps, and though they probably weren’t aware, odds were about even it would kill them.

Still, they had no choice. Mother Duck laid her nest up there earlier this spring. A Mother Duck, in fact, has been nesting in the Kline’s planter the past several springs. Alexis Ward, assistant general manager, figures this was the fourth year in a row. After a couple weeks sitting on the nest, the eggs hatch and the ducklings jump. The ones that live seem to be the ones that make some effort: flapping, straining, fighting with every feeble ounce to fly. They don’t fly, but they often slow the fall enough to survive it.

“The other ones just kind of plummet,” Ward said.

Last year, this thankfully happened in the morning. No little kids were there to see it. Ward and the other workers thought about going out to help somehow, but the adult ducks – a male, presumably the father, was waiting on the ground – were putting off an aggressive vibe. So the Kline’s staff let nature take its course, and afterwards, Ward sent one of the ice-cream makers out to scoop a few fuzzy corpses off the concrete. Success rate c. 50 percent. That’s about how things went previous years, too.

Ducks, in a way, are a major reason The Citizen exists. Exactly a decade ago, while working my last job on the actual staff of a news media organization, I filed a story about the ducks of downtown Harrisonburg. As part of my reporting, I roamed the banks of Blacks Run on the north end of downtown, and dutifully wrote about what I observed. Between a sex scene and some grisly bits about certain ducks that did not make it to the other side of the road, my editor deemed the piece too edgy to print. I’d already been questioning my long-term future at the place; being young and idealistic and brash, I decided I simply could not abide such censorship. Soon I was a freelance writer. Some years later, I had a local blog. Still more years and many lessons learned later, I was among the crew that founded this news website. Had it not been for those ducks living their gritty duck lives downtown, who knows how things would have turned out.

All that to say, when I took my kids to Kline’s last week and found the duck sitting on her nest in the planter, I sensed another gritty duck story taking shape. This time, I’d be the one calling the editorial shots. I kind of hoped, to be honest, that things would end badly for 2019 Kline’s brood. A dark, disturbing duck story on Easter weekend? What proper journalist could resist that?

Let me take a little detour here into what’s been going on with the duck population in the decade between my journalistic treatments of it. Back in the late aughts, the duck situation was getting out of hand, with a few key area residents making matters worse.

“We had a lot of people feeding them in the parking lot at Purcell Park. Every morning they would feed ‘em and they’re be 200 ducks in the parking lot,” said Wes Runion, an environmental specialist for the city. 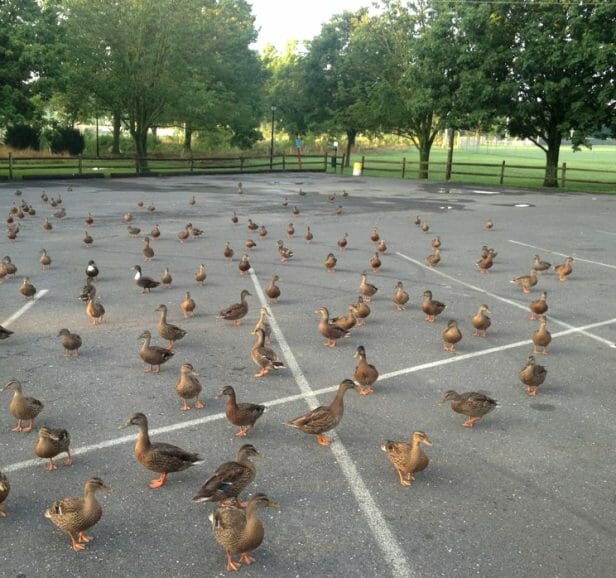 The bad old days of plenty. Photo from a City of Harrisonburg web page.

In 2012, Runion became “the big driving force to decrease the waterfowl population” in Harrisonburg. It started with cracking down on the feeding. On the most-wanted list were the folks who scattered 50-pound bags of corn in the Purcell Park lot. One particularly stubborn duck feeder ignored a half-dozen verbal warnings and called Runion a Nazi, forcing the city to eventually no-trespass the feeder from the park.

The Lineweaver Apartments, up near the Kline’s ducks’ nesting grounds, were another feeding hotspot. Runion orchestrated an anti-feeding PR effort in the building to check the runaway downtown duck population train.

“That’s a huge load of waste and fecal coliform bacteria that’s entering our stream,” he said. “That’s the big reason why we shouldn’t feed the ducks.”

In the end, putting a crimp on feeding seemed to work. There are still a lot of ducks downtown – probably still above a natural carrying capacity, Runion figures – but the Wild West days of 50-pound corn bags are over. The hordes they attracted have dissipated, and city’s duck threat advisory level has come down a notch.

“Everybody should enjoy seeing the wildlife we have in the City of Harrisonburg,” Runion said. “But on the other hand, we need to keep our wildlife wild. Enjoy the ducks. Take pictures of them. But please don’t feed them.”

The ducklings that hatched last weekend and jumped off the planter beat the odds. Zero fatalities. A customer sent in a picture of all 11 of them waddling around safely on the ground.

“I guess they figured it out this year,” Ward said. 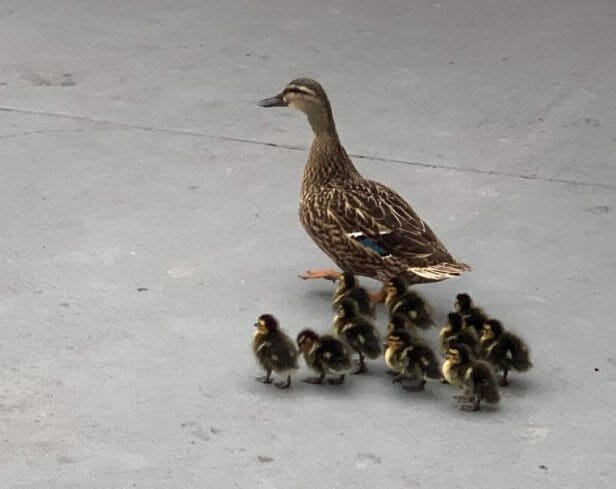 It’s a relief to have them gone, too. Mother Duck lurking in the planter attracted a fair bit of attention and presented something of a liability concern. The duck family hasn’t been seen for a few days now. Presumably they’re down there by the stream, settling into long and fulfilling duck lives ahead of them.

A tragic ending to this story was not to be. That’s probably for the best. The world needs more gentleness these days. Ten years ago, a savage duck story changed the arc of my professional life; here’s to the next ten, and wherever this story of frail duck tenacity might lead.