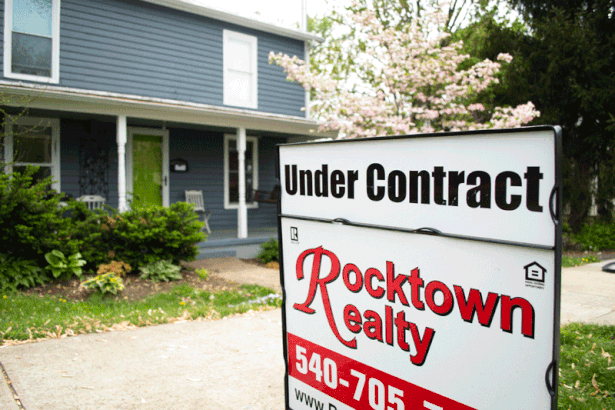 It’s increasingly difficult to spot a “for sale” sign without the “under contract” part – like with this one in the Sunset Heights neighborhood on Apr. 30. According to realtor.com, the property was listed on Apr. 4.

Editor’s note: This is the first in a series on the local housing crunch, who it affects and what’s causing the squeeze. The second part is coming Monday, May 6.

Soon, perhaps even later today, Wes Way hopes he will have signed the contract on a home in the Northeast neighborhood. Way, an owner at the worker-owned restaurant, the Little Grill Collective, is a first-time home buyer.

A “motivating factor” for Way to purchase a home was that, after the down payment, “it’s cheaper than renting,” he said.

“The rent’s too damn high in Harrisonburg,” he said.

He encouraged anyone who, like him, might be intimidated by buying their first home to just commit. His monthly mortgage payment will be about three-quarters the amount he’d have to pay in rent for a comparable place.

Way only needs the house to make it through an inspection without major issues, he said. He can handle minor repairs and cosmetic changes himself.

“I know which end of the hammer to hold,” he quipped.

While he looked at houses for about a year as he established good credit, Way ended up selecting a house owned by people he knew and making “a more informal arrangement” than offering a bid to strangers.

Where have all the for-sale signs gone?

Way is one of the prospective buyers scrambling to find a home before it gets snapped up in Harrisonburg’s tight market. Knowing the seller can be a boon to buyers, as homes tend to be on the market for a matter of days, or sometimes hours, before going under contract.

“More people seem to want to move to this area than move out,” said Scott Rogers, a realtor with Funkhouser Real Estate Group, who has been analyzing the local housing market, and graphing his findings, since 2007. Rogers’ April analysis shows the effects of the high demand and low supply when it comes to Harrisonburg real estate.

In the city and surrounding Rockingham County combined, the number of home sales per year is declining for houses under $200,000, according to Rogers’ report, but “likely because of limited inventory, and fewer properties existing in this range based on increasing home values.” All other price ranges have seen year-over-year increasings particularly in the $200,000 to $300,000 price range, the report says. 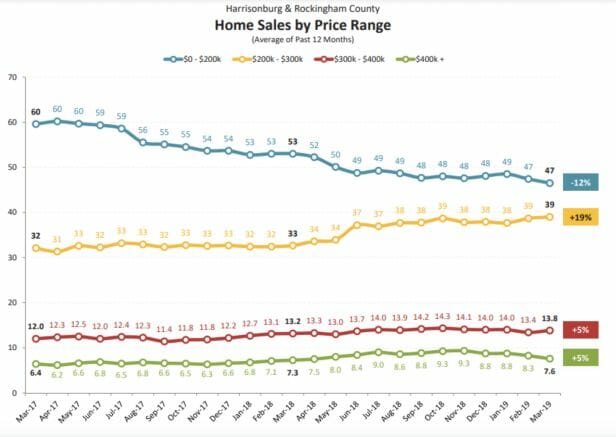 And while March this year looked to be a slower month for sales across the state, taking a longer-term look at Harrisonburg specifically shows a different trend.

At first glance, it looks like March was slow with lowers sales numbers – 25 compared to last March’s 46. But those 25 homes got snapped up fast. The average number days on the market for houses this March was four. Last March, that number was 35 days.

In the last 12 months, the average number of days on the market was 14 — just two weeks. 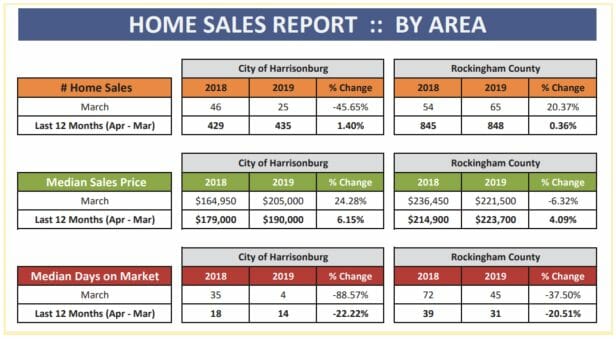 “When homes are coming on the market, they’re going under contract much more quickly, which is keeping inventory numbers low,” Rogers said. “I think that the amount of buyers who would buy is increasing, and so I think that’s why we’re seeing an increased speed.”

While the continued pace of Harrisonburg’s growth is uncertain, even with current conditions, the city is in the midst of a “seller’s market.”

“Usually that is cured by new construction in a market,” Rogers said. “Usually builders would see increasing demand … and would start to build new housing stock.”

However, Harrisonburg isn’t seeing the level of new construction that would meet the level of buyer and, by extension, renter demand.

“Harrisonburg has been growing every single year, even after the [housing] bubble popped during the recession, but new housing starts have not come close to keeping pace with that,” Ritchie Vaughan, a realtor with Kline May Realty, said.

Vaughan said that she regularly hears complaints about the effect of James Madison University on housing, but from her perspective, the city and university are both growing, and both depend on each other.

“I also get a lot of pushback where, locals say, ‘prices have gone up because of the students, it’s all the students’ fault, let’s hate on the students,’ but the other reality is that our economy is based on JMU,” says Vaughan.

JMU’s student population has increased by about 1,800 since the spring of 2010 to 20,798. In that same time, the Harrisonburg city population – which includes students who live here most of the time – grew by about 5,301 people, from 48,914 to an estimated 54,215. That makes JMU’s enrollment responsible for only a third of the overall population increase over the past nine years.

A recent panel discussion on poverty at Asbury United Methodist Church quickly turned to issues of housing availability, and several attendees chimed in about James Madison University’s perceived role in the lack thereof.

“Our universities are huge, they’re a big part of our community,” one woman said, “JMU is growing; why cannot we as a community hold them accountable to say, ‘we’re going to be good neighbors, and we want you to grow, but you can only grow as much as you have place to put students?’”

All types and price levels of homes for sale are currently in high demand in Harrisonburg, and in seemingly dwindling supply. But is that really the students’ fault?

The big picture is a lot more complicated – a confluence of both student and overall population increase, favorable conditions in the Harrisonburg area that attract more people to and several disparate barriers to new construction.

Rogers summarized the barriers to new housing construction as a confluence of regulations and separate actors, each with its own agenda.

But the barriers to developing land and building a new house are more complex than the basic costs of grading the lot, building a foundation, framing and slapping on a roof.

It involves environmental considerations, competing priorities and the bureaucracy that governs it all. And that system could change soon in ways that would alter home construction within the city limits.

That’s coming Monday in the next article in this series on the Harrisonburg housing crunch.