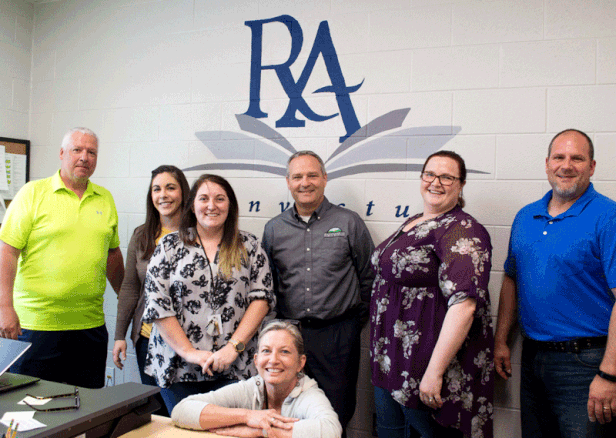 For the students of Rockingham Academy, a sweatshirt emblazoned with the school’s logo is more than just a token of school spirit. It’s a badge of honor.

“In their home schools, they probably … were never seen as part of a team, athletically or otherwise, they weren’t in a group. They were probably disenfranchised, disassociated,” said Scott Bojanich, the academy’s principal. He gives out the hoodies himself when he feels a student shows true personal progress.

Rockingham Academy, on Pleasant Valley Road, is an “alternative education” school in the county school district. It’s currently wrapping up its first academic year in this incarnation. (The program was formerly housed at the Dayton Learning Center.)

The academy takes in students from across the county for whom traditional school isn’t working. Sometimes it’s because of ongoing discipline issues. Other times, students will choose to go to the academy. Class sizes are very small — around 10 students per teacher — and those teachers focus more on building relationships than raising test scores.

Bojanich said that some students get their hoodies after their first week. One student had been at the academy for a month before getting his. Bojanich recalled that student getting off the bus every morning with his head down, grumbling and cursing, and not paying attention in class.

But the different educational options the school offers can reach students in ways that traditional classrooms and school discipline may not. One day, Bojanich was walking down the hallway, when he heard music therapist Robby McCoubrey playing alongside a student.

“I was like, ‘wow, that’s pretty good.’” Bojanich stopped in and saw that student — one who struggled to pay attention in class — skillfully playing a bass guitar. While he already knew how to play a regular guitar, he had just picked up the bass for the first time.

Bojanich gave the student a hoodie that day. And while he said the student still has bad days, there’s been a noticeable improvement in his outlook.

That kind of personal attention is what really makes Rockingham Academy exceptional. And the students need it.

Bojanich said all of the academy’s students have an Adverse Childhood Experience, or ACE score, of three or higher. That figure indicates how many toxic, or adverse, home conditions  a person endured during childhood — for example, a parent’s drug or alcohol abuse, regular emotional or physical abuse from their caretaker or having their physical health neglected. According to the Centers for Disease Control and Prevention, the more ACEs a person has, the more likely it is that the person faces chronic health conditions, displays high-risk behaviors, struggles with mental health issues and die younger.

“We all have a really good idea what our students endure … In many cases our students are the parents. They are more responsible and in some cases are raising their parents. Then they get on a bus. And then they come to school all day,” Bojanich said. “And it amazes me how they do it.”

‘Decompression’ and blowing off steam

To better work with their students, the academy brought in Lynn Grigg and Brandy Haden from the Harrisonburg-Rockingham Community Services Board to train the faculty and staff on “trauma-informed care” at the beginning of the school year.

Even how the day is structured can be trauma-informed, meaning that it is intentionally designed with trauma survivors in mind. The start of the school day takes place in the cafeteria/gymnasium, where students can eat breakfast, socialize, play basketball or ask a teacher to walk and talk with them. They get another 15 minutes of unstructured time after lunch.

The basketball court is one of the teachers’ favorite things about their new building.

Susan Meadows, an economics and personal finance teacher and the school’s testing coordinator, said it has “been very beneficial for the students this year, just to have those decompression periods.”

English teacher Emilie Siciliano tries to have the same classroom routine every day: prep work, then grammar “warm-up,” then vocabulary practice, and so on. This kind of repetition can help build trust with students: it demonstrates a consistency that they may not have elsewhere in their lives.

Siciliano said that while schoolwork is important, she knows that her students’ backgrounds affect their classroom behavior. “And if I am always pushing against that, we’re not going to get anywhere. But if I understand that background, and I’m empathetic, then we get a lot further.”

“A kid that gets off the bus and comes in here karate kicking, screaming, crying, mad at the world is not mad at you,” Carte said. “But you probably are going to catch most of it. And you better recognize that something happened the night before, at home, on that bus, or in the morning before they walked through the door.”

Revealing a need for more counseling

Mental health professionals are important for these students’ improvement, and it’s important to have them present in the schools. Many of the students’ families do not have the time, health insurance, transportation, or money to access these services outside of school. A Community Services Board counselor is on campus on Fridays. And therapeutic day counselors are available throughout the week, but only to those students covered under Medicaid.

Bojanich said they have recommended to county superintendent Oskar Scheikl that they have a full-time “early intervention counselor” from the Community Services Board at the academy, whose position would be funded by the school district.

“We are hopeful that this occurs for the next school year,” Bojanich said.

The academy isn’t the only school calling for these professionals. At a roundtable discussion with Gov. Ralph Northam held at the academy on May 6, Scheikl said “it would be really helpful if there was support from the state” to hire more mental health professionals.

He said 16 percent of students across the county have an ACE score of four or higher, and “they really need a different level of counseling” than is currently available in most schools. 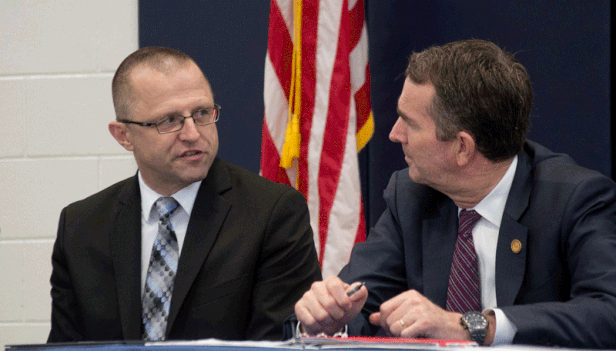 Besides music therapy, the academy also offers a quiet room with books and a puzzle, classes through the Massanutten Technical Center next door, its own technical education shop (including carefully monitored saws), and a recreation room with a ping pong table and PlayStation4, for use at certain times of the day.

Science teacher Don Rhodes proudly noted that “they respect the equipment down there.” Students were told at the beginning of the year that if they broke, for instance, the gaming console, it wasn’t getting replaced. And it’s remained intact.

‘We are the constant’

The teachers are joyful, laughing, as they tell these stories. They’re a close-knit team, just over a dozen of them to take on the kids least likely to succeed in other schools. Their camaraderie is a valuable tool when doing such emotionally demanding work.

“I get thoughtful, concerned maybe, about the trauma for our teachers. It takes a very special person to work with our kids,” said Bojanich. “We’re their moms and dads. And you truly are, whether you want to be or not. A child sometimes will just adopt you.”

School counselor Michelle Campbell received a Mother’s Day card from one of the students last Friday.

“We are the constant in their life,” said social studies and GED teacher Nancy Hill. At a traditional school, she wouldn’t see the same students year after year. But for those who choose to stay at the academy, and most of them do, they maintain those important relationships with the same faculty and staff.

Siciliano loves when her former students come back to visit.

“One of our students who graduated, maybe last year – he built the roof on this building! When we have kids that come back . . . they’re so proud to share with us what they’re doing,” she said.

Their graduates’ success demonstrates more than just career skills or a good paycheck. Besides a whole host of negative lifelong conditions, those with high ACE scores are likely to have children earlier, and their children are also likely to have a detrimental upbringing. The Rockingham Academy staff are out to stop that societal cycle.

Campbell hopes they can teach the students that “You don’t have to be a statistic. You can break the cycle that you’ve lived.”