With 3 weeks to the primary, Finnegan and Copeland ramp up their (different) approaches to reach Democratic voters 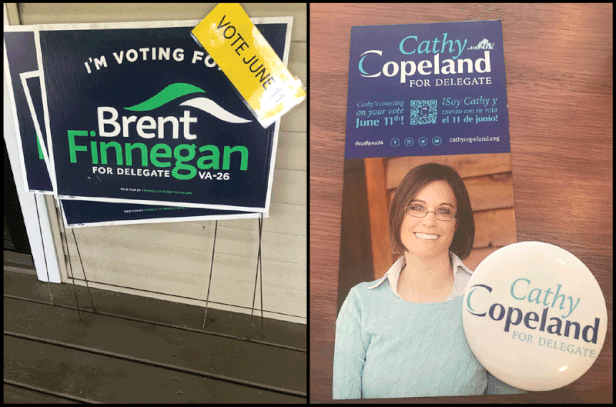 Brent Finnegan and Cathy Copeland, the two Democratic candidates running for the 26th state House seat, might leave little space between each other when it comes to their positions on issues, but the two are taking slightly different approaches to connect with voters before the June 11 primary.

Both Finnegan and Copeland are seeking to personally connect with potential voters and motivate them to go out to the polls in three weeks. Finnegan has methodically been canvassing neighborhoods in the district — which covers Harrisonburg, Dayton and northern Rockingham County including Broadway. Copeland, meanwhile, has been focused on hosting small events and forums on specific topics, in addition to traditional door-to-door campaigning.

Lynlee Wastie, Finnegan’s campaign manager, said one major challenge is to remind people about the election itself, especially because of its timing. Virginia’s June 11 primary falls as schools are letting out for the summer — Harrisonburg’s high school graduation is June 8 — which is not an ideal time for people to be dialed into local politics.

Both Finnegan and Copeland have focused on communicating with non-English speakers in the community by having their websites available in Spanish. Copeland has plans over the summer to launch her website in Arabic and Kurdish as well.

The two Democrats, who are in a rematch of the 2017 Democratic primary race, are running for the chance to challenge Republican state Del. Tony Wilt of Broadway this fall. Wilt, who has served the district since 2010, didn’t draw a GOP primary opponent, allowing him to prepare for the fall general election against either Copeland or Finnegan, who was Wilt’s challenger two years ago.

Finnegan and Copeland are each banking on establishing personal connections with voters to lock up their support and motivate them to go to polling precincts.

On Saturday, for instance, Brent Finnegan spent the afternoon and early evening knocking on dozens of doors in the Waterman neighborhood of Harrisonburg, which also happens to be his home neighborhood.

One homeowner showed his support for Finnegan but told the candidate he was skeptical that district voters would elect any Democrat in the fall. Finnegan reminded him of the outcome in 2017, when he received 45 percent of the vote in his first go-around. He pointed out that he won more than 60 percent of votes in Harrisonburg and expects that figure to go up.

As he talked with voters, Finnegan stressed the issues of affordable housing and protecting the environment. He also tried to convey how those issues are connected and stressed that taking such a systemic analysis helps set him apart.

That’s one of the reasons Finnegan said he got into politics.

He recalled driving home from work one day on Reservoir Street near a low-income neighborhood and seeing a mom and her young son walking. When they went to step over the guardrail her son ran out in traffic, right in front of his car. Although no harm was done, Finnegan couldn’t help but think that if it had been a wealthy neighborhood, there would have been a sidewalk on a busy street like that.

“The more I thought about it, the more it bothered me, and so that night I signed up to be on Planning Commission,” he said.

“As I’ve been on Planning Commission I’ve learned a lot and you take votes and you’re never 100 percent sure whether the vote that you took is the right vote but you do the best that you can with the information that you have,” he said. “And I did a lot of research and I’ve done a lot of self education around those issues so you know I have a voting record that goes back two and a half years.”

That local government experience, as well as his volunteer work and background starting the now-defunct online news site hburgnews.com in 2006, is what he said most separates him from Copeland. Finnegan, though, rarely — if ever — mentions Copeland and instead brings his answers back to his own views and experience.

Making her case to small groups

Meanwhile, on Sunday, Cathy Copeland, hosted a mental health forum at White Oak Lavender Farm, where she invited school psychologists, teachers and midwives to talk about how they have encountered mental health issues in their professions. About a dozen area residents — all women — attended the event, many of whom served as speakers.

“I really wanted to focus in on mental health,” Copeland said, “because when I look at the issue I just see that people are hiding it, they’re hiding it behind other discussions or they’re not talking about it.”

Copeland told the group how she battled postpartum depression with her first child and believes that everybody can benefit from talking about mental health.

“I wanted to let more people know about it because I think knowledge is power when you can start to showcase reasons for everybody why they could benefit from understanding about mental health from knowing what a school counselor can do at work, what a school psychologist does, it’s something that I think people should be talking about more,” she said.

Copeland, an adjunct professor of writing, rhetoric and technical communication at JMU, said she has practice in writing legislation, which would allow her to step in and start crafting bills on Day One.

“I think I have a very strong background in writing legislation and because I’m already a rhetoric instructor, I don’t think that can be overlooked, that I’m not just only able to do the writing and reading that this job requires,” she told The Citizen.

Intensely focusing on specific areas through small discussions and forums — such as with the mental health talk on Sunday — also prepares her for talking about topics of importance to a wide swath of voters, she said.

“I know it’s kind of a popular thing to just knock on doors of strong Democratic voters, and I’m knocking on their doors but I’m also knocking on everyone else’s doors too and trying to say wait a second just because you haven’t voted in here doesn’t mean you don’t have a voice,” she said. “So I think I’m looking to include a lot of people and include people who aren’t often in the political arena but whether they’re friends with me or they’re excited by my stances on mental health or education are getting involved and saying wait a second we can actually make a difference and make a change.”

When asked what made her want to run again for the nomination, Copeland said she remained eager to push for campaign finance reform and pointed to Finnegan’s campaign spending at the end of the 2017 general election. Finnegan finished that race with about $7,000 in his campaign account — money Copeland said should have been spent.