At Democratic forum, candidates largely in agreement on the issues – and critiques of Republican policies 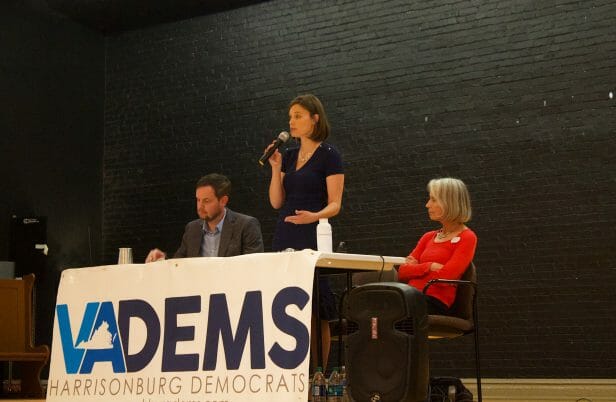 From left: Brent Finnegan, Cathy Copeland and April Moore, Democrats running for the General Assembly this year, at a candidate forum on Thursday evening. Finnegan and Copeland are competing in the primary for the 26th House of Delegates District, while Moore is running for the State Senate.

At Thursday evening’s forum, Cathy Copeland and Brent Finnegan, the two candidates for the Democratic nomination in the 26th House of Delegates District, revealed little distinction in their positions on topics like education, the environment, the economy, abortion, and gun control. And rather than attacking each other, they spent lots of time criticizing Del. Tony Wilt, the Republican incumbent one of them will face in the general election.

The Harrisonburg Democratic Committee sponsored the forum, which was held at the Lucy F. Simms School. The primary, to be held on June 11, between Copeland and Finnegan is a rematch from 2017, when Finnegan won the nomination but lost to Wilt that November.

Neither candidate held back in criticizing Republican lawmakers’ stance on gun control, with Finnegan calling the country’s gun violence epidemic “a national embarrassment” that has continued because “political leaders have no spine.”

“The third word [in the Second Amendment] is ‘regulated.’ And we need to do that,” said Finnegan, who also emphasized his support for responsible gun ownership.

“It’s hard for me to say that the Second Amendment should trump the rights of people,” she said. “Legislators have not been brave enough to go where they need to go and fight what they need to fight.”

The two put forth similar viewpoints on balancing environmental protection and economic prosperity in Virginia, voicing support for things like a Green New Deal and improved public transportation.

Environmental and economic issues “don’t need to be separate,” Copeland said. “They are part of each other.”

Finnegan called Dominion Energy “a big stumbling block in Virginia” that is “always slowing down legislation.”

Both candidates have pledged not to accept money from Dominion.

When asked about third-trimester abortions – a controversial topic at this year’s General Assembly session – both Copeland and Finnegan described themselves as pro-life and pro-family.

“The larger issue is white male politicians trying to police and control women’s bodies. That has been happening for a heck of a long time,” said Copeland, who believes that abortions should be rare, legal, and safe.

Finnegan said he trusts “women to make decisions about their own bodies and their own healthcare.”

He added that the topic of third-trimester abortion is a “wedge issue created by the Republican Party,” and that he refuses to participate in these types of arguments. “Tony Wilt does not want the people of the 26th District to realize what they’re doing and to organize around programs and policies that support the common good. We can’t let him do that,” he said.

In her closing remarks, Copeland said that she will not back down from difficult conversations if she is elected to represent the 26th District in Richmond.

Finnegan, emphasized his long involvement in community issues as one of his biggest qualifications to serve in the state legislature.

Ruth Jost, who volunteered with Finnegan’s campaign in 2017, was among those in attendance. She plans to volunteer for whoever wins the primary.

“I would say we can’t go wrong,” Jost said. “We have two really good candidates for the June primary, and I would want to knock myself out for either one of them.”

In addition to the two candidates for the House of Delegates, April Moore spoke about her goals and views at the forum. Moore is running uncontested for the Democratic nomination in the State Senate’s 26th District. Moore ran unsuccessfully for the same seat against incumbent Republican Mark Obenshain in 2015.

Moore framed abortion as a religious issue, saying she respects people having their own beliefs concerning it.

At the same time, she said she is “totally against using the state’s coercive power to force all of us to abide by the values of some of us.”

A former Republican, Moore devoted much of her closing remarks criticizing the current state of the Republican Party. She asserted that the difference between the two parties is no longer about Republicans having more conservative solutions compared to Democrats’ more liberal ones.

“The Republican Party has become all about power, and will do anything necessary to keep that power,” she said.