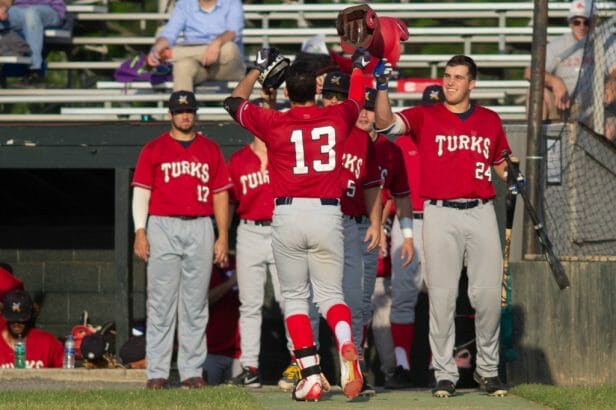 Editor’s note: This is the first installment of a new every-other-week column on Valley League baseball that will appear in The Citizen this summer. You can find much more of John Leonard’s writing on his website, All Things Valley League.

Of the many, many things to do in Harrisonburg on a summer evening, few have been around as long as the Harrisonburg Turks, a local baseball team with a tradition stretching back almost 100 years. The Turks open their season at 7:30pm on Friday, May 31, with a home game at Veterans Memorial Park against the Charlottesville Tom Sox.

Established in 1922, the Turks are a member of the wood-bat Valley League, one of a one of a dozen or so wood-bat summer leagues around the country. Now consisting of 11 teams in or near the Shenandoah Valley, the Valley League serves as a proving ground for some of the best college players in the country. While college baseball uses metal bats, professional leagues all use wooden ones – making experience in a wood-bat league valuable for top-level collegiate players potentially about to turn pro.

The young men come from near and far to test their skills against other star players. This summer, for example, the Turks have recruited players from as far away as Oklahoma (Bryce Milligan and Jake Patterson, both from Oklahoma City University) and as close as Penn Laird (Cameron Irvine, from Gulf Coast Community College). The Purcellville Cannons often have invited players from California to play in the Valley League. All of these players must have college eligibility remaining. They range from current freshman to current juniors, and come from any level of college, including the NAIA, junior colleges, and all three divisions of NCAA baseball.

While the players mostly come to play ball, they also can get local jobs or internships, and sometimes continue their education while competing up and down Interstate 81. Some Valley League teams farm their players out to host families, while others, like the Turks, find alternate housing. In total, more than 400 players will play in this summer’s Valley League season, which runs through early August. 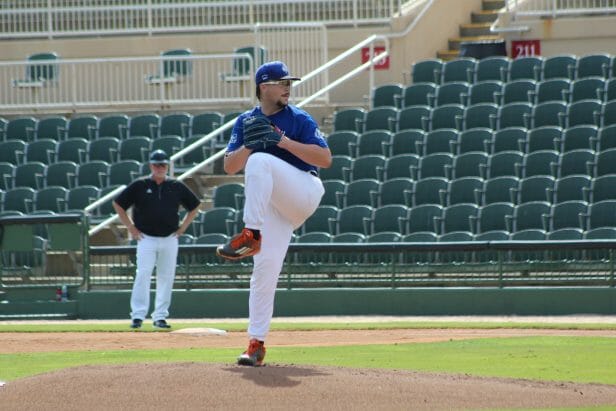 Standout pitcher Mason Studstill will return for a second season with the Turks this year. Photo by James McCumber, courtesy of the Valley League.

The Valley League was established in 1897. Today, its main purpose is to give players more experience, especially those who will become professionals and begin the long, arduous road to the major leagues. The Turks arguably have the best track record at developing players in the league. From 2010 to 2016, the team has seen more than 50 players go on to play professional baseball. While most of them have “just” played in the minors, many players who have spent time in the Valley have gone on to cash a major league paycheck. The Valley League as a whole has produced more than 200 major leaguers, and currently has about 15 alumni in the major leagues, while over 100 former players are toiling in the minor leagues.

Among the Turks’ high-profile alumni are former EMU standout Erik Kratz (2001, catcher for the Tampa Bay Rays), Emilio Pagan (2010, reliever, also for the Rays), and Mac Williamson (2011, outfielder for the San Francisco Giants). Two former Turks who went on to outstanding major league careers will also to be inducted into the Valley League Hall of Fame this summer: Mo Vaughn (1987) – a three-time All-Star and the 1995 American League MVP – and Juan Pierre (1997), who won the World Series with the Florida Marlins in 2003 and stole more than 600 bases during 13 years in the major leagues.

Of course, watching a winning team makes things more fun, and the Turks have a long, long history of success. The team has advanced to the Valley League playoffs nine seasons in a row, tied for the longest current such streak in the league, and 17 out of the last 18 years. The franchise won a league championship in 2011, and has won the pennant (aka finished first in the division – next-best thing to a championship in layman’s terms) four times in that span. Since 2001, the team has been, by far, the Valley League’s best during the regular season. With a winning percentage of .598, the Turks are more than 35 games better than the Winchester Royals, second with a .550 percentage.

This summer’s team has an amazing number of players returning for a second season, which reduces the adjustment period to using wooden bats, arduous travel, and perhaps even to being away from home over the summer months. Two are higher-profile pitchers, Mason Studstill and Grant Stewart, both of whom pitched in the league in 2017. Studstill, from Florida Gulf Coast, was the best pitcher for the Eagles this spring, striking out an excellent 96 batters in 86 innings pitched. The Turks also welcome back Eli Ellington (UNC-Charlotte), a big, physical lefthander. On the offensive side, Harrisonburg will enjoy having Jack Wilson (Western Kentucky) return, as Wilson hit a solid .307/.423/.407 (that’s batting average/on-base percentage/slugging percentage – the higher the better) in 199 at-bats for the Hilltoppers. All in all, an incredible nine former Turks, at least, are returning to the ‘Burg in 2019.

Newcomers are obviously expected to contribute as well. A key performer will be Nick Zona (JMU), a freshman shortstop from Mechanicsville, who hit .337/.387/.388 in 98 at-bats for the Dukes this spring. Nick was drafted by the New York Mets in the 2018 amateur draft, but chose to attend JMU instead of signing a pro contract. Right hander Austin Koehn (UNC-Greensboro) was dynamite this spring, winning four games and striking out 67 batters in 77 ? innings pitched for his college squad.

The Turks will have two players with big-league connections as well. First of all, Irvine’s father, Daryl, who played in Harrisonburg in 1984 when he was a student at Ferrum, went on to pitch in over 40 games in the major leagues with the Boston Red Sox before returning to the Valley and participating in the Rockingham County Baseball League for several seasons. Zona has a big-league connection as well, as his father, Jeff, has been a longtime scout for the Washington Nationals.

Fans unable to attend Friday’s home opener– which, honestly, you really should strongly consider – can watch live online, courtesy of Sheetz and Subway, or listen to an online broadcast.