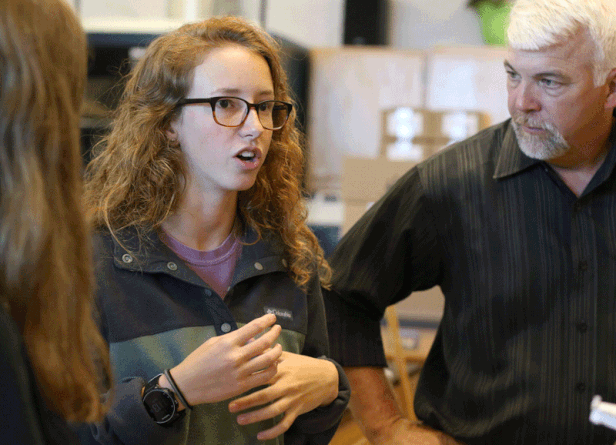 Harrisonburg High School senior Hannah Miller explains the results of her STEM group’s project titled “Lead Toxicity and Its Risks To Wildlife and Humans Through Fragmentation” as teacher Myron Blosser listens in. (Photos by Holly Marcus)

The projects cover a wide swath of topics: a patent-pending tool to analyze DNA, a device aimed at addressing a modern twist on “smoking in the boys’ room,” and a comparison of the strength of historic patterns of chain mail.

Over the past school year, the students at Harrisonburg High School’s Governor’s STEM (Science, Technology, Engineering and Mathematics) Academy have been working on those research projects and on Friday will present their results the public at the school’s “STEM Showcase.”  Fifteen senior capstone projects will be presented, followed by a period when 60 student project posters will be available for viewing.

“We were working with real money and real clients,” said Alsaadon, who plans to study mechanical engineering at Eastern Mennonite University. “We were communicating with the client [the school] throughout the engineering and construction process.” 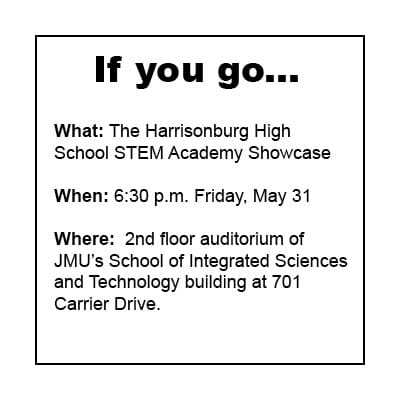 Seniors in the STEM Academy, such as Alsaadoon, are expected to complete a “capstone” project as a final opportunity to apply and showcase the skills and fundamentals they learned during their time in the program.

“Our capstone projects are designed to leave our mark on the school,” Alsaadoon said.

Vaping releases chemicals such as formaldehyde in aerosol form. Romero’s team developed a device that can pick up airborne chemicals and send a warning alert. For Romero the lesson learned from the project was to keep trying after failure as his team kept redesigning the device until they were successful. 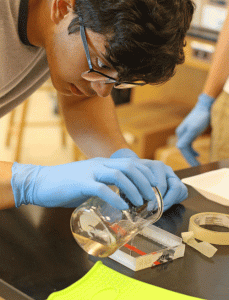 Keenan Glago and his team made a modification to a device used for gel electrophoresis, a process used to separate and compare DNA. Those machines have a flaw: when the gel is heated, it forms steam, which clouds the viewing window. A simple modification kept the window clear for viewing the DNA.

Glago said his group is in the process of patenting the idea and outside institutions have expressed interest in the design.

Not all of the projects are aimed at improving present devices or paving a new future. Jadelin McLeod’s research idea came from her interest in the Middle Ages.

“I wanted to make a chain mail shirt. When I tried to determine which pattern was the strongest, I found there wasn’t any research,” McLeod said.

McLeod, working independently, made chain mail using two historic patterns that originated in Japan and Europe. She then tested the tensile strengths of each design.

Her research not only looked at the force needed to pull the mail apart, but also the pattern of failure of the metal rings that makes up the mail .

While it might seem like an interesting coda to bit of historic technology, it’s also relevant now. Contemporary uses of chain mail includes suits to protect divers from sharks and gloves used to protect the hands of workers in the meatpacking industry.

McLeod took first place in the engineering category at the Virginia Junior Academy of Science’s Annual Research Symposium with her project titled “The Comparative Tensile Strength of Two Chain mail Weaves.” She was one of many STEM Academy students who presented at the May 21-23 symposium in Norfolk. And her project was one of three projects that placed. 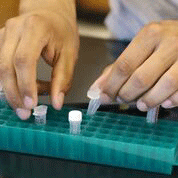 Ruben Salazar is working with fellow classmates to show DNA strands of Huntington’s disease as part of a curriculum his group is designing.

The team of Christa Cole, Andrea Fox, Noah McIntire and Hannah Miller placed third in the environmental science category with “Lead Toxicity and Its Risks To Wildlife and Humans Through Fragmentation,” a project detailed in a December Citizen article.

It was the best results the school has had at the symposium in the five years Harrisonburg High School has participated — a sign that the STEM Academy is “maturing,” said the department’s co-director Myron Blosser.

“After 35 years of teaching I’m at the point that most people would start to consider retiring, but for me it’s just starting to get exciting,” Blosser said.