Perspectives: My image (and others’ perceptions) 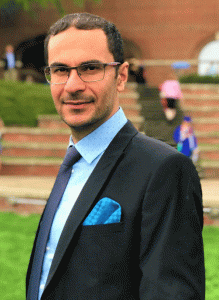 It was the beginning of May 2017 when I was volunteering for Tom Perriello, who was running in the Democratic primary for Virginia governor.

I was sent to go door-to-door with a friend of mine, who was from the area. She is white, blonde and an American girl. I came to the U.S. in 2016 from Kurdistan region of Iraq. And I got involved for Perriello’s campaign mainly because of his passion for renewable energy.

We were knocking on doors belonging to people who voted for Democrats in previous elections.

Every time she rang the bell, we were met by nice people with a great sense of welcoming. My friend and I decided to take turns, so I had the chance to knock on people’s doors and distribute some brochures to encourage people to vote for Tom Perriello.

The first time I rang the bell, a gentleman opened the door. He asked me with a stern tone: “What do you want?”

His gruff, abrupt greeting took me aback. I was going to introduce myself and explain what brought me to the area, but I was shocked. Why did I need something from him? What made that gentleman think that I am the one who needs something, and he is the one who has the power of giving or rejecting.

That was one of my very first impressions to racism and prejudice based on color of my skin.

After what it happened, I thought for a long time about how the color of my skin or the sound of my accent might cause people to judge me before even getting to know the real me. What difference does it make when they read my emails and see my name at the bottom?

After I moved to the U.S, I experienced three kind of reactions from local people. The first and the most are people who do not feel comfortable when they see me or accidently interact with me. The second group of people are those who they feel sorry for me when they realize that I am from Iraq or the Middle East. I would like to tell them I do not need your pity. The last group of people are those who accept me the way I am without prior judgement. Unfortunately, the last group have been in the minority.

What is the impression of my image when they first see me? After my transition to this country, I had to learn that my skin color is brown. I have never realized that I am brown before moving to the U.S.

I have been observing people’s reaction when they first see my face — during job interviews, while I go for a walk or even when I just met the parents of a girl with whom I went for a date.

I know that people make assumptions about everything. It is a human nature. However, the assumption some people make about me causes me to feel so uncomfortable. For example, one day someone asked whether I knew what Facebook is? I told her that I am a software engineer and asked her what made her think that I was not aware of this revolutionary social networking site that has been around for more than a decade.

Most of the time I feel insecure if I do not have a perfect smile. I am very sure my image can make people feel uncomfortable if I do not present my attitude and language in a way beyond excellency. Moreover, even if I smile at them, they still judge no matter how nicely I behave or how sweetly I speak.

We still must strive for what Martin Luther King Jr. was dreaming about. We still need to dream about living in a place where we do not get judged by the color of our skin but the content of our character.

I don’t blame the color of my skin. I cannot change that — and I wouldn’t want to. I am proud of my image no matter how one might judge it. My accent’s tone is exquisite, no matter how it makes someone feel. I wish the only thing that people define anyone by is who they are as a person.

I wish everyone could do something — no matter how small it would be — to respond to daily racist reactions with love, light and smiles.