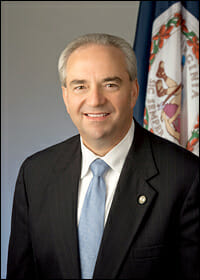 In response to legislation passed by the General Assembly this spring, former Lt. Governor Bill Bolling has stepped away from his job as Senior Fellow at James Madison University. Bolling’s hiring for the position in August of last year, just after he completed a term on the school’s board of visitors, was met with criticism that it represented a conflict of interest. Though JMU maintained that the hire was ethical, the school announced on Monday that Bolling no longer worked there.

Bolling, who served as Virginia’s Lieutenant Governor as a Republican from 2006 to 2014, was appointed to JMU’s board of visitors in 2014. His four-year board term ended in June 2018, and he was hired as a Senior Fellow in Residence for Public Service the following August. JMU filled the position, which was guaranteed for three years and had an annual salary of $140,000, without conducting a competitive search process. A December investigation by the Richmond Times-Dispatch found that Bolling had helped create the position for himself and that in addition to his salary, the university agreed to pay for his rent at a university-owned house in Harrisonburg for one year as a signing bonus. The article also reported on emails showing that the three-year job guarantee was designed to boost Bolling’s state pension, while noting that taking higher-paying state jobs to pad retirement earnings “is not unusual for former legislators” from both parties.

Last December, in response to the hiring, State Senator Mark Obenshain (R-Harrisonburg) introduced SB 1068. The bill that proposed amending state code to prohibit people from obtaining employment with a public university for four years after serving on that school’s board of visitors.  The legislation was sponsored in the House of Delegates by Steve Landes (R-Verona).

“I do not pretend to know the motivations behind the hiring, but it is a relationship so close that I believe it should have been clear that it was too close and would violate most people’s notion of what would be inadvisable of contract under traditional conflict of interest rules,” Obenshain said in an interview with The Breeze, the JMU school newspaper, in January. 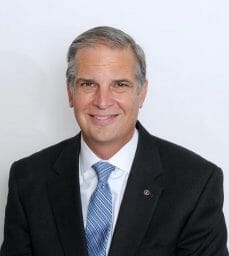 Obenshain’s bill was later amended to reduce the period of time to two years and to exempt the position of an institution’s president. The amended bill passed both houses with only three dissenting votes and was signed by Governor Ralph Northam.

While Obenshain said that he intended his bill to be applied retroactively, JMU disagreed. In a March interview with WMRA university spokesperson Bill Wyatt said the university had “no reason to believe that it’s going to affect Mr. Bolling’s contract.”

In response to inquiries from The Citizen regarding Bolling’s employment status with JMU as of July 1, the university issued statements on Monday from President Jonathan Alger as well as Bolling.

“Bill Bolling’s employment as Senior Fellow in Residence for Public Service concluded on June 30, 2019, due to the impact of the new state law regarding employment of former board members,” Alger’s statement began. “Mr. Bolling has done an outstanding job for the university during the past year, providing leadership on a wide variety of initiatives and issues including civic engagement, economic development, rural Virginia support, preparation for the future high-tech workforce, advancement, and government relations.”

“I am extremely disappointed that I will be unable to continue in my role as Senior Fellow at JMU after June 30, 2019,” Bolling said in his statement, which thanked Alger for “the unique opportunity to work with the great team at JMU.”

“This is due to legislation that was passed by the General Assembly earlier this year. It is not what we wanted nor expected,” Bolling continued.

Critics of Obenshain’s bill claim the legislation was aimed at Bolling as political retribution. In 2013, after ending his own campaign for governor, Bolling declined to endorse either Republican gubernatorial candidate Ken Cuccinelli or Obenshain, who was running for state attorney general. Both Cuccinelli and Obenshain lost in that election – with Obenshain losing to Mark Herring by just 165 votes. Bolling was accused of supporting Democratic candidate Terry McAuliffe, who won the election and then as governor appointed Bolling to JMU’s board.

Obenshain, who denied any ill-will towards Bolling as his bill proceeded through the General Assembly, was unavailable for comment on Monday after JMU announced the end of Bolling’s employment. When asked in February how he thought JMU and Bolling would respond if the bill passed, Obenshain said he had “no reason to believe that they wouldn’t comply with the law.”

In his statement, Bolling said he plans to continue guest lecturing on a volunteer basis at JMU.

“While I know that we accomplished a great deal over the past nine months, there is much more work to be done. My commitment to JMU and higher education remains unshaken,” Bolling wrote. “There is nothing more important than our efforts to restore a more civil society, and we will not be deterred in our commitment to that important work.”