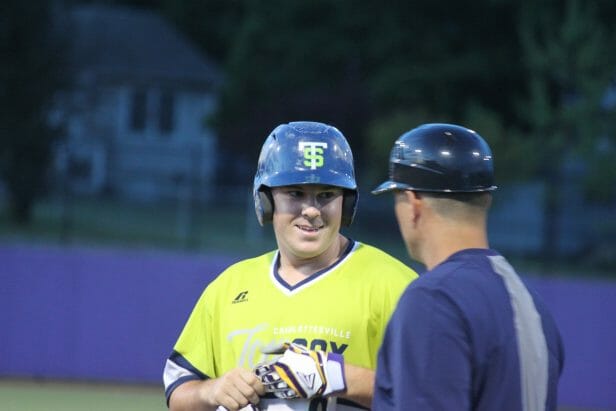 Thomas Francisco of the Charlottesville Tom Sox leads the Valley League in batting, with a hit in all 21 Valley League games he’s played in this summer. A deep run into the playoffs will give him an opportunity to extend that further. Photos by John Leonard.

Perusing my Twitter feed a few days ago, I happened on a post about summer college league playoffs. The user suggested a new paradigm for getting kids to play hard right up to the end of the season: the winner of the regular season goes home first. Everyone else stays for the playoffs. Losers in each round move on to face the next team, while winners get to go home.

The implication, of course, is while most of us think the summer is going by too quickly, many college players in summer baseball leagues, like the Valley League, really want to go home after seven weeks.

It’s easy to forget that the league is mostly populated with 19- and 20-year olds. These young men have just finished a grueling college baseball season, and now, some of them are away from home for the first time, living with families they don’t know, and playing on a team with maybe one or two people they know. It can be a slog, a grind even for the most focused. In fact, when I speak with players about the end of the season, every year some admit, “I just want to go home.”

But here we are, with the regular season ending on Thursday and “normal” playoffs ahead of us – you know, playoffs where the loser is eliminated and the winner goes on to the next round, unlike the Twitter user’s novel plan. The Valley League does it the way most leagues do; the first place team in each division will square off against the fourth place team in a best-of-three series, and will play the winner of the series between the second place vs. third place team. The two winners of the divisional playoffs then face off in another best-of-three series, playing for the Jim Lineweaver Cup as the champions of the Valley League.

With the 2019 regular season wrapping up in a few days, how do things look this year?

First of all, four teams – two from each division – look the strongest. In the North, the Strasburg Express and Woodstock River Bandits are leading the pack. In the South, the Waynesboro Generals have the best record in the league, while the Charlottesville Tom Sox also have a strong team. Oddly, these four are the only teams in the league with a winning percentage over .500, going into Sunday’s games. 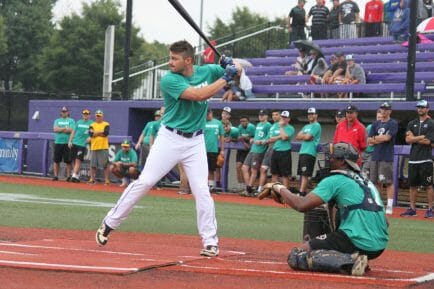 The Express have two hitters, Sonny Dicharia and Tyler Johnson, who are capable of going deep in any at bat, and it shows – the Express have 45 team home runs, almost 15 more than the next closest team. The Bandits have a strong, deep lineup, led by Aidan Nagle and Caleb Ward. At .418, Nagle is second in the league in batting average, while Ward, at .394, is third.

In the South, the Waynesboro Generals have the best claim to the league’s most complete team. The Generals are fifth in team batting average, and lead the league in team ERA by a pretty wide margin. And the Charlottesville Tom Sox have put together a solid team for the third year in a row. The team is collectively hitting almost .300, led by Thomas Francisco, who has a hit in every single game since he arrived in the Valley this summer (21 games through Saturday), and Cayman Richardson, a local outfielder from the University of Virginia.

As things stand at this moment, the other teams in the North to make the playoffs are the defending 2018 champions, the New Market Rebels, and the Winchester Royals. At this point, the Purcellville Cannons and Front Royal Cardinals would go home.

In the South, the Covington Lumberjacks and the Staunton Braves, who boast one of the league’s top hitters in Andrew Czech, are the third- and fourth-place teams.

That brings us to our heroes, the hometown Harrisonburg Turks. While the team has had some sustained stretches of good baseball, it has often struggled to score, and the fielding is too often inconsistent. Through Saturday, the Turks stand at 15-23, a full three games behind the fourth-place Staunton Braves. This puts one of the league’s longest-running playoff streaks in jeopardy – the Turks last missed the playoffs in 2009. Waynesboro, which also hasn’t missed the playoffs since 2009, has already clinched a spot this year. That means if the Turks can’t pull off a comeback, the Generals will take over the longest playoff streak.

The regular season ends on Friday, unless some kind of apocalyptic weather event causes too many games to be postponed. The playoffs will begin immediately on Saturday, with each higher seed hosting. That means that Waynesboro, Charlottesville, Strasburg, and Woodstock will likely host games on the first day of the postseason.

Regardless, even under the tried-and-true, plain old, losers-go-home scenario, there’s some intriguing Valley League baseball ahead of us.