For some kids this fall, back to school will mean back to nature 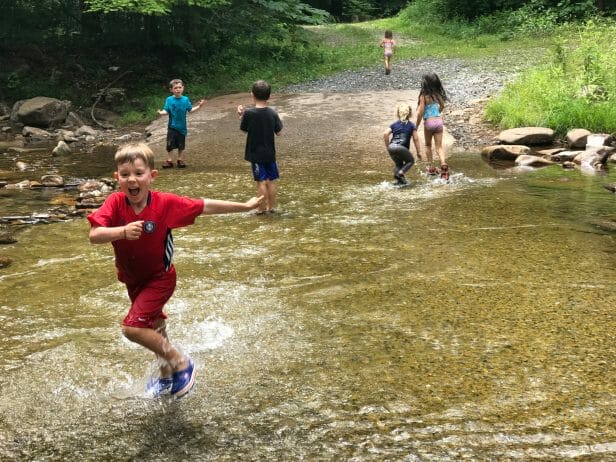 Five-year-old Ethan Hart runs with full force through a creek during summer camp with Shenandoah Forest Discovery. All photos by Mary Ann Zehr.

The group of kids packs a lot into a July morning in the George Washington National Forest. They pick and eat wild raspberries, jump off a big rock (they call it a “diving board”) into a creek and run around. They growl at each other while playing a “cheetah game,” observe a field mouse, and eat a snack. They shriek while bouncing up and down on a fallen log.

Soon this kind of summer fun will end for most children in the Shenandoah Valley ­– at least on weekdays. For kids in the area’s two new “forest schools,” however, the creek splashing, centipede study, hiking, picnicking and everything else will carry on.

Popular in several European countries, such as Sweden and Germany, two forest schools will run during the school year for the first time in the great outdoors surrounding Harrisonburg. The Appalachian Forest School and Shenandoah Forest Discovery both operated as day camps this summer and will extend their programs through the school year.

In both cases, the directors transport children in vans to a forest location that will serve as the day’s classroom. While they provide some structure – snack, naptime, lunchtime – the daily schedule mostly follows the children’s interests.

“We love it. We love that kids get to play, be outside, and explore,” says Merridy Gnagey, whose daughter, Emi June, 4, is participating in the Appalachian Forest School this summer.

Gnagey plans for her daughter to extend her time with the forest school during the coming school year, before staring kindergarten the following year.

“Emi June has learned all about creatures and trees and is really confident outside,” Gnagey continues. “This is the perfect way to have a year of outdoor exploration before starting school.”

Stevie Lee, director of the Appalachian Forest School, says there’s no better place than the outdoors for unstructured play, which is good for child development. Last summer, she started the forest school business with her husband, David Lee, the GIS coordinator for Shenandoah Valley Electric Cooperative, and in the spring, she graduated with a master’s degree in sport and recreation leadership from James Madison University. While Stevie and assistant teacher Courtney Ballou, another outdoors enthusiast, take the children to places in the national forest and other outdoor destinations, David supports the business behind the scenes. 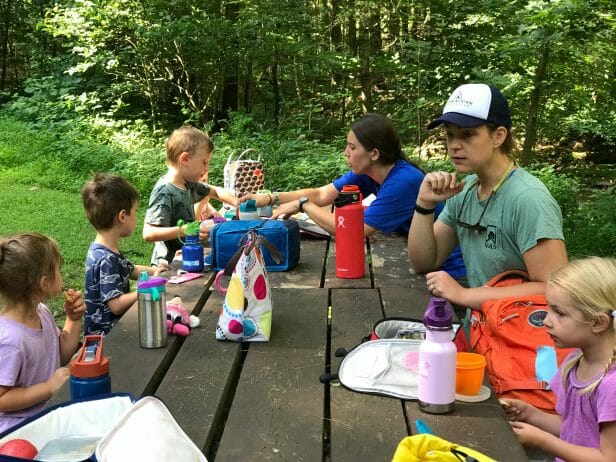 Growing up in Mount Crawford with three siblings, Stevie spent a lot of time outdoors.

“My mother would say, ‘go outside and play,’” she recalls.

Another inspiration was the 2005 book, The Last Child in the Woods. In it, author Richard Louv links the “nature deficit” experienced by some children today to problems such as obesity, attention disorders, and depression. The book “lays out the importance of kids’ being outside and how learning connections happen when they are outside,” Stevie says.

This summer, 19 children are enrolled in the Appalachian Forest School, participating two days a week from 9 a.m. to 3 p.m. for 10 weeks. For the fall and winter, parents can register children ages 3-5 for between two and five days per week.

“I’ve read that when kids play outside, they are calm and alert and that’s the way they learn the most,” says Drake, who has a bachelor’s degree in anthropology and environmental sciences and a master’s degree in early childhood education from James Madison University.

Drake intends to teach children some of the “primitive skills” that people in modern Western society have largely forgotten, such as basket-weaving, building a fire with friction, and working with clay.

“Our ancestors used to live much more closely to the land than we do now. They had this deep knowledge about the way nature works and the ecology of where people live,” she says. 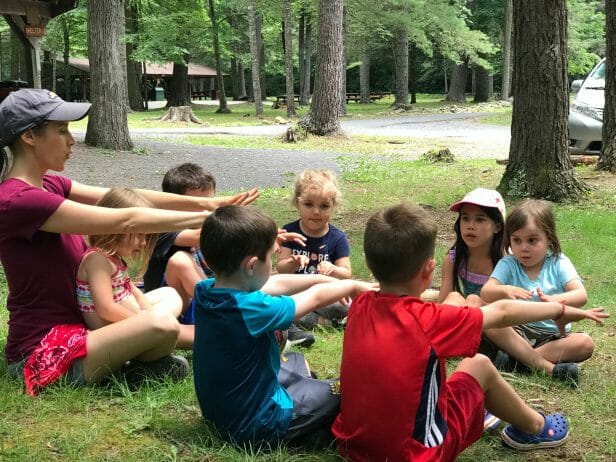 With her daughter Margot in her lap, Kristen Drake, the founder of Shenandoah Forest Discovery, leads children in group games at Riven Rock Park on July 3.

The 2010 book, Coyote’s Guide to Connecting with Nature, by Jon Young, Ellen Haas, and Evan McGown, is one she cites as an inspiration for the initiative. While her forest school program for the upcoming school year is already full for ages 3-8 (including her own two daughters, whom she homeschools), Drake still has room for homeschoolers ages 9-14 to sign up to participate one day per week.

The directors of both forest schools use picnic pavilions or tents as shelters during meals or if it rains. For the winter, the Appalachian Forest School has an arrangement with Camp Brethren Woods in Keezletown to use a cabin for drying off or taking naps, although the children will still spend most of their time outdoors. Drake, of Shenandoah Forest Discovery, plans to use a teepee that stands 19-feet tall and can safely accommodate a fire inside for shelter. She’s also looking into using private land that might have a cabin available.

For the children exploring the creek in the opening scene of this story, a highlight of the morning is encountering a brown mouse on the bank of the creek. Lee and Ballou gather around with the children to observe the bright-eyed mouse peeking up through leaves. Lee makes sure the children don’t get too close and announces, “We’re not going to touch him.”

Four-year-old Theo Beers spots a flat rock with a baby mouse lying on it. When he picks up the rock, Lee has him lay it back down.

“Is it dead? Is it breathing?” the children ask with worried voices.

Then, all of a sudden, the little brown mouse dashes out from her cover and snatches her littler one in her mouth.

Theo exclaims that the mouse “came back for the baby!”

“I knew that was a mother because there was a big mouse and a little mouse,” adds Theo’s brother, Elliott, 6.

“I’m glad I came to forest school so I could see that,” says Theo.

On another recent afternoon at Riven Rock Park in Hinton, the seven children in Shenandoah Forest Discovery make “fairy houses” with moss, sticks, rocks, and leaves, then splash in a stream, and play a couple of group games.

The children also explore the park’s human landscape. After lunch, they unsuccessfully attempt to open the bear-proof trash cans, and then become engrossed in drawing pictures on the cement floor of a picnic shelter with charcoal scavenged from under a grill.

Working together, several charcoal-smudged girls draw what they say is a firetruck. Nearby Jacob Linder, 7, and his brother Jude Linder, 5, pound rocks on the cement to create a yellow dust, then pour water on it to make “yellow chalk.”

And then, at both schools, there are those close encounters with forest creatures the children don’t necessarily view as friendly.

After an insect lands near his eye, a distraught four-year-old participant of the Appalachian Forest School begins crying for Mommy. But after Ballou (a certified wilderness EMT) examines his eye and determines that no insect is actually in it, he calms down. Moments later, he’s splashing in the creek, the insect seemingly forgotten.

At Shenandoah Forest Discovery, Ethan Hart, 5, is annoyed by what he calls a “hornet” hovering over his lunch. “Don’t bother it,” Jude Linder chimes in from across the picnic table.

Drake weighs in with a matter-of-fact tone of voice: “I think I saw something smaller than a hornet but your friend gave you good advice—if you don’t bother it, it won’t bother you.”

Kymber Beers loves the idea of having her sons Theo and Elliott getting up close and personal with mice, centipedes, berries, swimming holes and the rest of the natural ecosystem in the area’s parks and forests. She and her husband are busy; it’s hard to plan outdoor activities for the family more than a couple of weekends per month.

“[The boys] love it,” Beers says. “They come back and they are soaking wet and dirty. It’s great.” 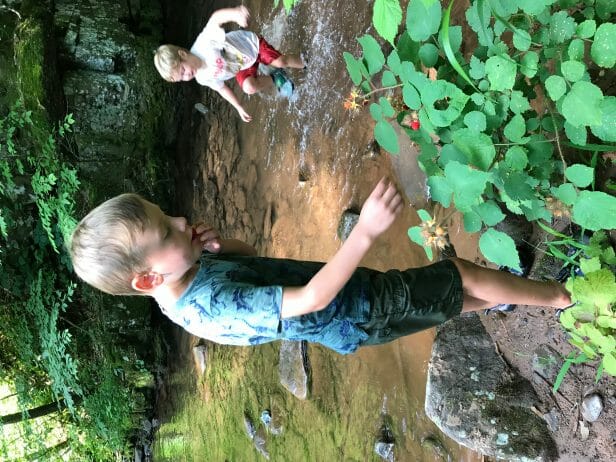 Elliott Beers, 6, interrupts his exploration of a creek to pick and eat wild raspberries in George Washington National Forest on July 15.