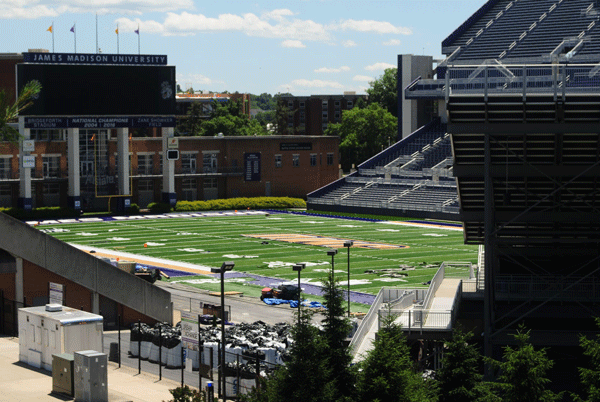 Contractors put the finishing touches to the new turf on Zane Showker Field in June. (Photos by Catie Harper)

When fans file into Bridgeforth Stadium on Sept. 7 for the first home game of JMU football’s 2019 season, some players will be new — and so will the look of Zane Showker Field.

The new synthetic field, which JMU Athletics announced in May and was installed this summer, replaces one that had been used since 2013. The previous FieldTurf surface at Bridgeforth Stadium was under an eight-year warranty to cover any manufacturing problems. And while the field didn’t make it to the eight-year mark, JMU Athletics officials chalked it up to heavy usage and drainage issues that would sometimes make the field look like a splash-pad. But officials say the new field can last longer now that the university has addressed problems with the drainage system.

“As a result of the full scope of activities that occur in Bridgeforth Stadium, there has been significant wear and tear on the Zane Showker Field surface,” JMU Director of Athletics Jeff Bourne said in a statement announcing the new field in May. “This will place our student-athletes in a better position to succeed in preparation and performance while also adding an updated, aesthetically-pleasing branded look to our facility.”

JMU hired Carolina Green Corp. as the contractor to install the new field and chose to buy FieldTurf Revolution 360, the newest version of the synthetic turf from the old field. FieldTurf Revolution 360 has been used for more than “300 professional and collegiate organizations in North America,” according to the university’s May news release.

Over the past few years, Zane Showker Field has gotten a lot of use — and not just for Saturday football games. During the fall, the field provides a training ground for both the football team and the hundreds of members of instrument-toting Marching Royal Dukes.

That traffic has played a major role in the wear and tear of the surface. Assistant Athletic Director for Facilities and Events Ty Phillips said even though field needed to be replaced before the eight years was up, it’s still more durable than grass.

“The natural grass field just would not hold up to the amount of practices that they have,” Phillips said. “But, over time, when you have that many people and teams practicing it’s going to wear something out.”

For synthetic fields, the goal is to have a Goldilocks-like surface that’s not hard enough to injure a player who hits the ground but not too soft so it becomes spongy.

Phillips, who’s been at JMU for more than a decade, said when he walked on the old field, he could feel that it had become harder than other synthetic surfaces at the school.

In addition, an annual stress-test of sorts — called Gmax testing, confirmed with data that the field was breaking down, according to documents The Citizen requested through the Virginia Freedom of Information Act.

“One of the true benefits of having an infield having a synthetic field is that it’s porous throughout in the drains really well,” Phillips said. “That had been the condition of that field through the first several years of its life, but then over the last couple years, you start to see the water filtration not working as well.” 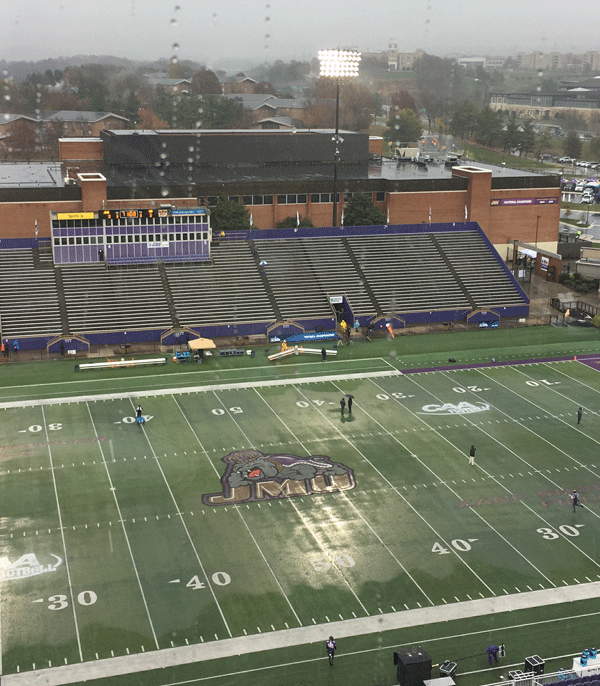 Slow drainage was apparent before the start of JMU’s Nov. 24 playoff game, as this view from the press box showed.

The filtration issue was on full display in November before a first-round FCS playoff game between JMU and Delaware. The Nov. 24 matchup between the two teams was scheduled for 3 p.m., but as kickoff drew closer, JMU Athletics considered pushing back the start — especially as several areas pooled with water as the teams warmed up.

“During warmups we actually noticed pooling to the point where it was actually causing bubbles on the field,” Phillips said. “It had become so compacted that water was not draining down through the subsurface areas to [the] drainage system.”

Other tests performed by Colman Engineering found an inadequate stonebase slowed the rate by which water soaks into the surface — called, infiltration rate in turf-industry parlance.  That led to the pooling of water. The suggested infiltration rate is 10 to 12 inches per hour, but the old field’s rate was at 0.67 inches per hour, according to the report received through the FOIA request.

In order to keep costs manageable and not interfere with the upcoming athletic calendar, JMU elected to keep the existing stonebase, the documents show. Instead of replacing it, contractors installed new drains throughout the field. The addition of drains offered “the most-timely and least-disturbing solution to the field’s drainage issues,” according to Colman Engineering’s report.

“We basically have twice the drainage that was out there previously,” Phillips said.

While JMU’s main concern was player safety and fixing the drainage problem, the need for a new field also provided a chance to update the on-field designs. JMU Athletics went through a rebrand back in January 2017, and Phillips said they did look into updating the field graphics, but it was too costly to do that.

“We’ve had an old logo on our field for a couple years,” Phillips said. “I think that’s important for people to know that the driver was not to make it look pretty, that’s a nice byproduct …  but, aesthetics is typically not the driver.”

But with college athletics serving as a key way for universities to connect with alumni and prospective students, branding remains important.

“It is one of the most visible impacts for anyone visiting our facilities, whether that’s a fan, donor, prospective athlete, student or anyone else,” said Kevin Warner, assistant athletics director for communications in an email. “For many sports, there is also a significant impact for watching on television or a digital stream, as well as photography or social media content emanating from an event. So it is important that a design reflects who we are and leaves everyone with a positive impression.”

The new surface at Zane Showker Field is less than a month away from its first game — which JMU Athletics officials say will be the beginning of a long life.

“We’re very hopeful that we will get eight years of really good usage out of this field,” Phillips said. “We can expect to get eight years and that’s pretty normal from most synthetic fields, sometimes you get a little bit more out of them.”