The fair is food

From the milk cows stanchioned in the dairy barn to cotton candy on the midway, the Rockingham County Fair is food. The horticulture and homemaking displays celebrate locally-grown and prepared food; beyond the exhibit halls, the fair is a celebration of consumption. Rockingham County is the top agriculture county in the Commonwealth, with an annual production of $796 million, and its fair is, appropriately, the state’s largest. It’s a place where both growing food and eating it are on full display. 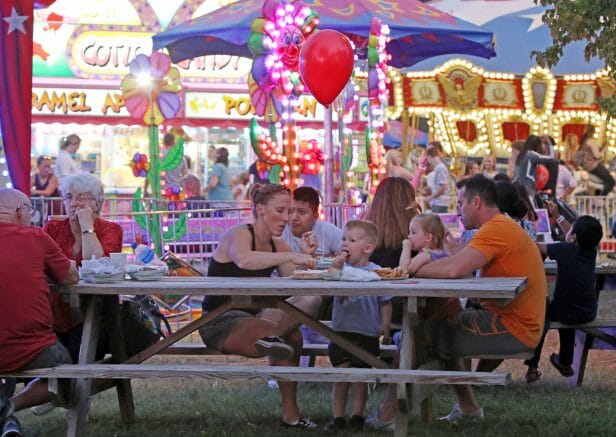 Funnel cakes and cotton candy are two of the most popular fair foods at the Rockingham County Fair. Families sit around picnic tables enjoying the sweet treats on Wednesday. 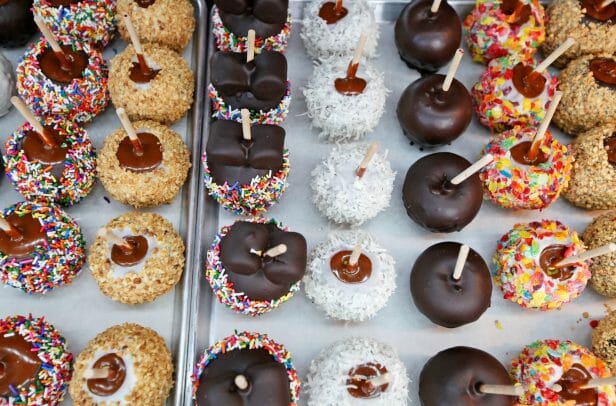 The traditional red candy apple has been around since the early 1900s, with caramel-dipped ones coming to local carnivals and fairs in the 1950s. At the Rockingham County Fair, apples are hidden underneath coatings of peanuts, sprinkles, coconut, chocolate and Fruity Pebbles cereal—one of the most popular flavors. 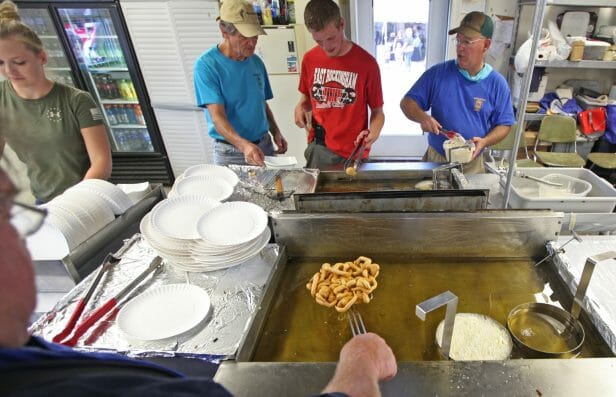 Members of the McGaheysville Ruritan Club fry up funnel cakes, a plate-sized, donut-like confection that is dusted with powdered sugar or cinnamon. For its main annual fundraiser, the group has been serving the fried cakes to Rockingham County Fair patrons for over 50 years. The McGaheysville Ruritans added battered and fried Oreo cookies to their menu a few years ago. 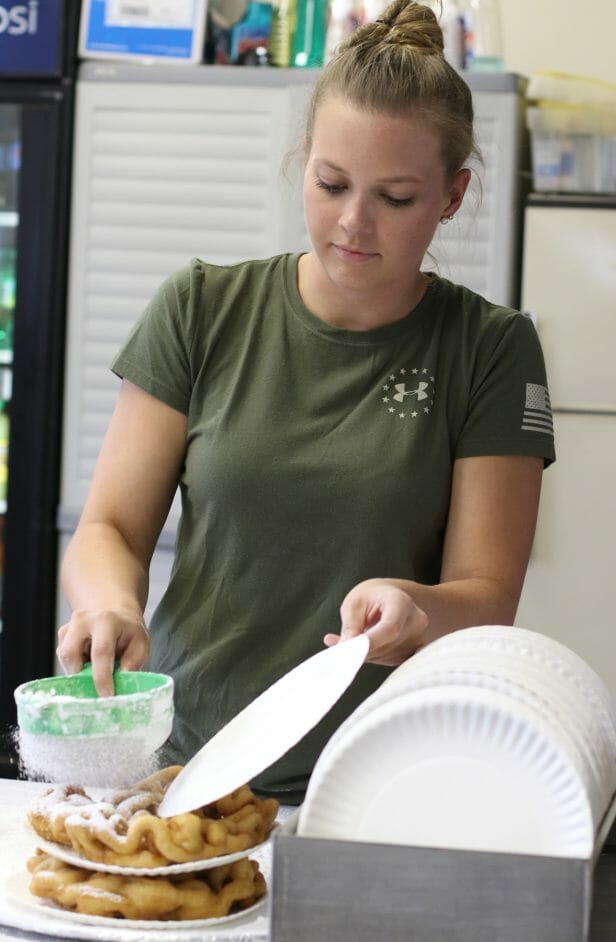 Rachel Nott, a volunteer in the McGaheysville Ruritan Club food booth, sifts powdered sugar over a hot funnel cake at the Rockingham County Fair on Wednesday. 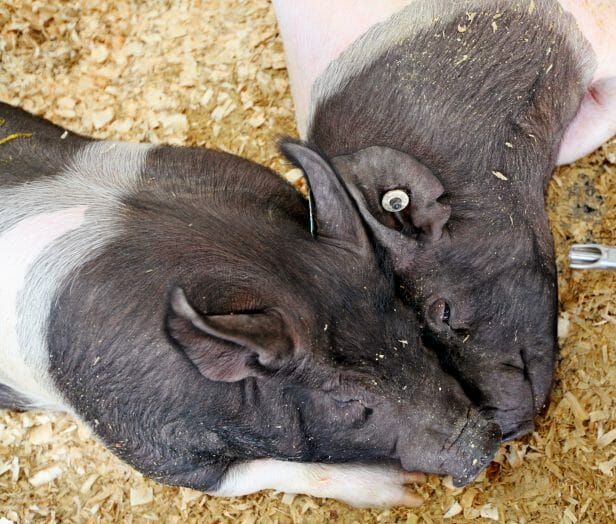 Two Hampshire pigs rest in their pen at the Rockingham County Fair livestock barn. Local farms bring the animals to compete in shows that reward good conformation and handling. According to the Virginia Pork Council, swine is Virginia’s 13th most important agricultural commodity. The country’s leading pork production states are in the Midwest. 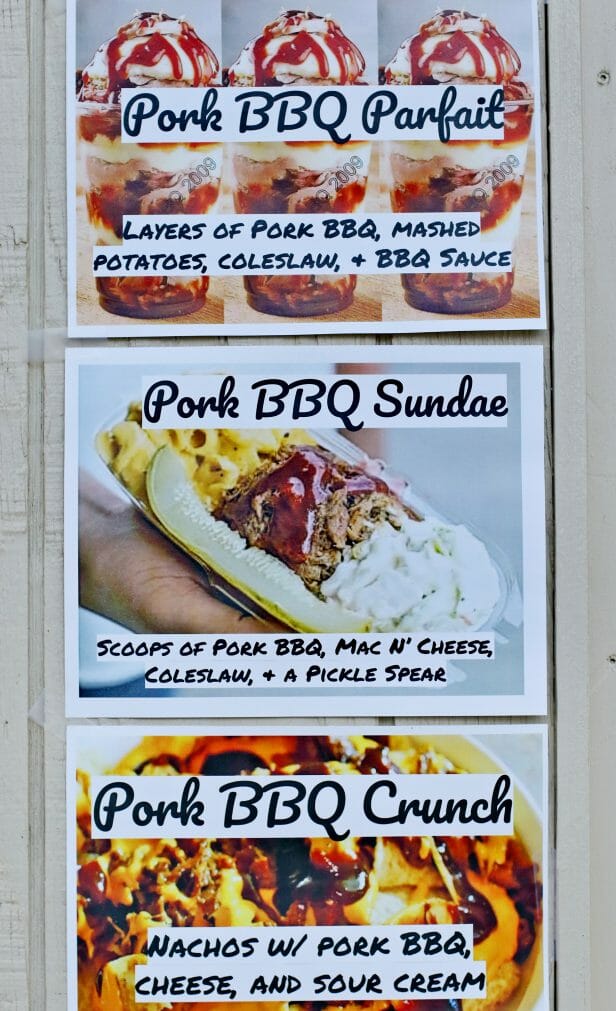 These pork-inspired creations are being served up at the Rockingham County Fair’s Pork Palace, run by local high school FFA students. 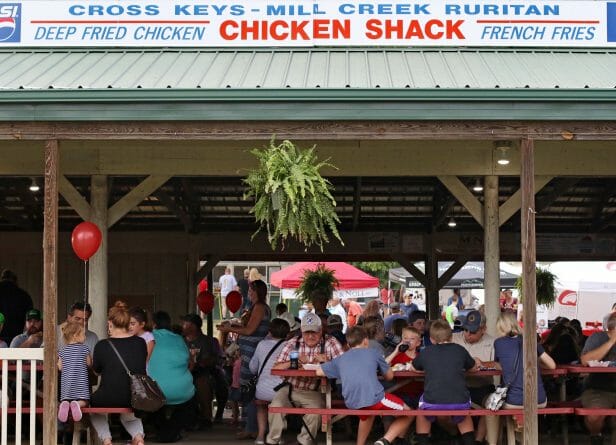 At the Chicken Shack, the Cross Keys-Mill Creek Ruritan Club rakes in over $100,000 during fair week by selling fried chicken, fries, nuggets and fresh lemonade, according to member Dean Boese. The club puts $50,000 of that back into the community in the form of scholarships and other projects, he said. 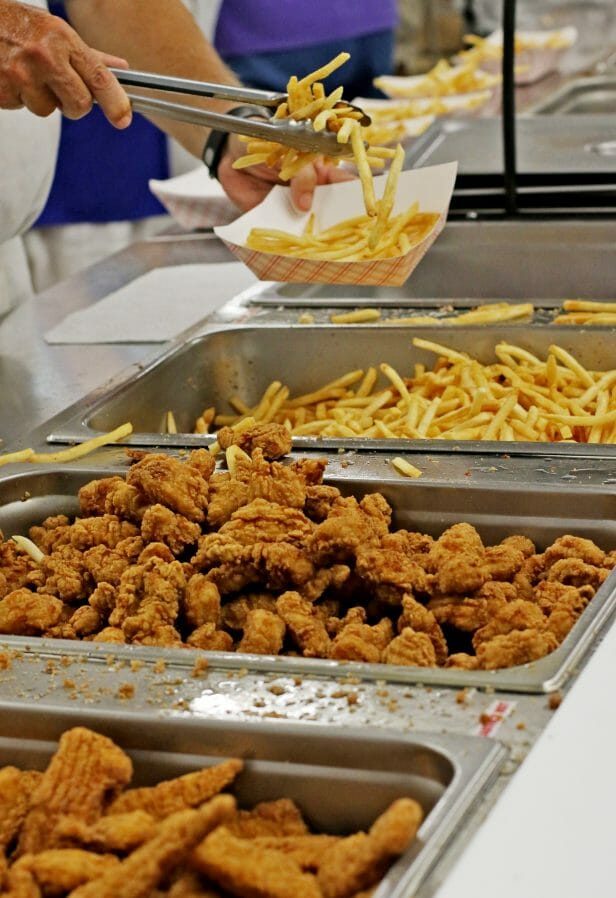 In one week at the Rockingham County Fair, the Cross Keys-Mill Creek Ruritan Club sells 6,600 pieces of chicken and 2.5 tons of french fries. 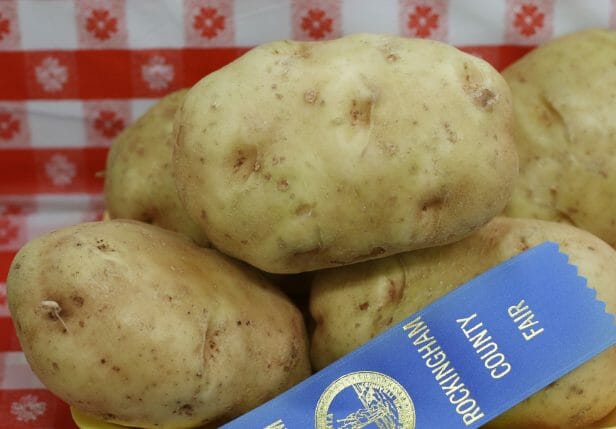 These Large white potatoes took first place in the senior horticulture contest at the Rockingham County Fair. The Shenandoah Valley offers a good growing climate for potatoes, with its cool spring weather and adequate rainfall. 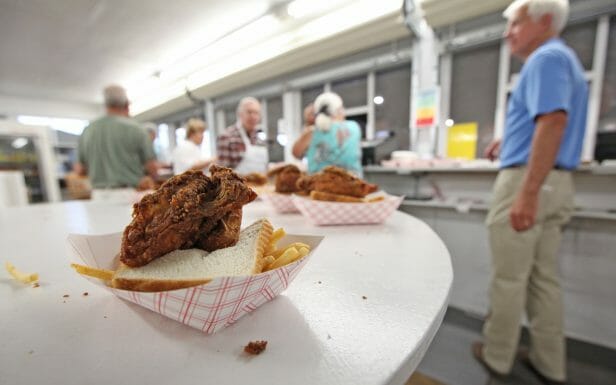 A fried chicken dinner awaits a customer at the Chicken Shack, run by the Cross Keys-Mill Creek Ruritan Club. Dean Boese, a member of the club, said it buys its chicken from Wholesome Foods, an Edinburg-based distributor that sources much of its poultry from Shenandoah Valley growers. 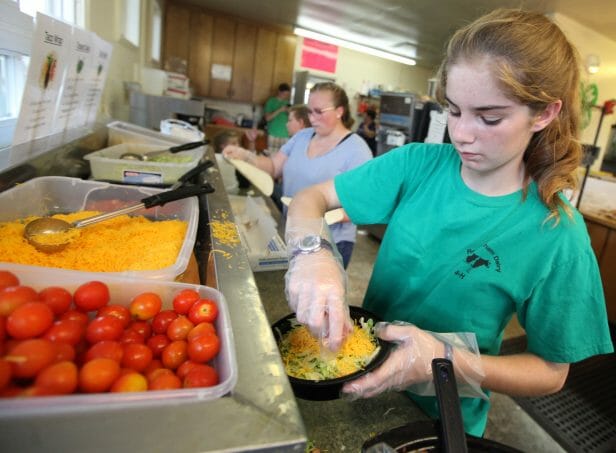 Rachel Craun, right, and Adrian Grandle assemble salads and wraps for customers at the Rockingham County Fair in the 4-H Food Pavilion. In addition to the rib-eye steak sandwiches they are known for, the 4-H club members wanted to offer healthier options such as taco salads and chicken wraps served with fresh fruit. 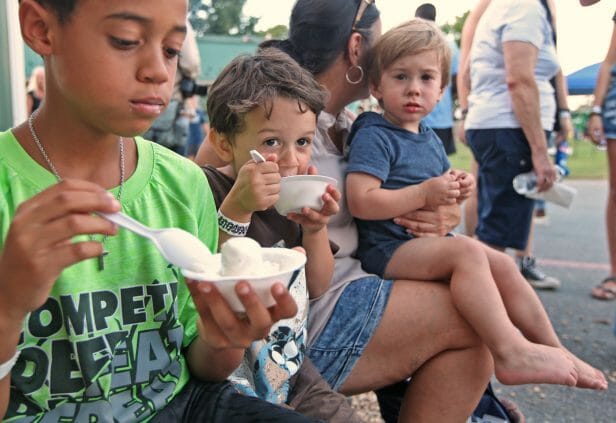 Alexander Camp, 5, center, gobbles up his cookie dough ice cream beside Eli Moore, 10, left, and Owen Camp, 2, while visiting from North Carolina. In addition to the ice cream, the boys’ favorite fair foods are kettle corn and funnel cakes. The homemade ice cream served by the Rockingham Young Farmers group comes from TOT’s in Penn Laird, which sources its milk and cream from a Bridgewater dairy. 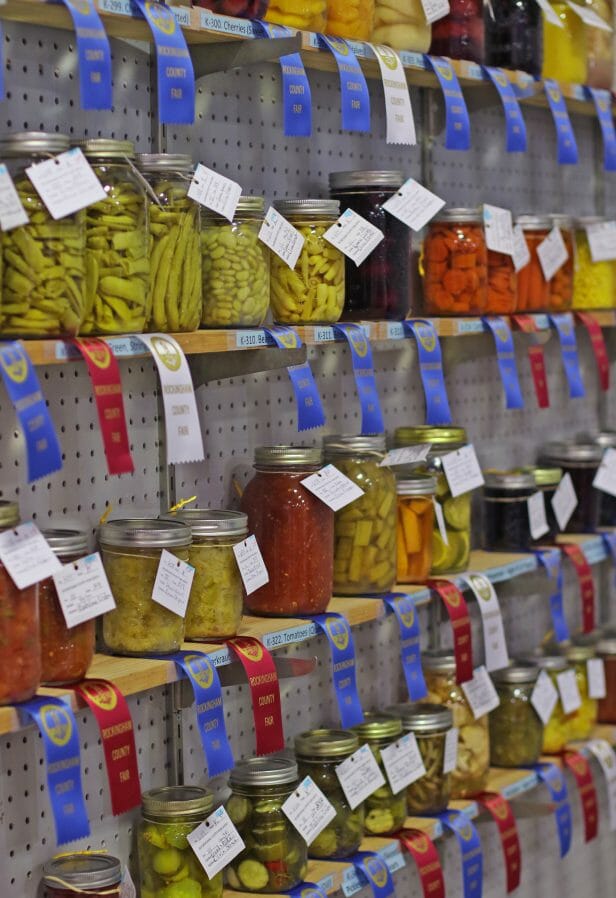 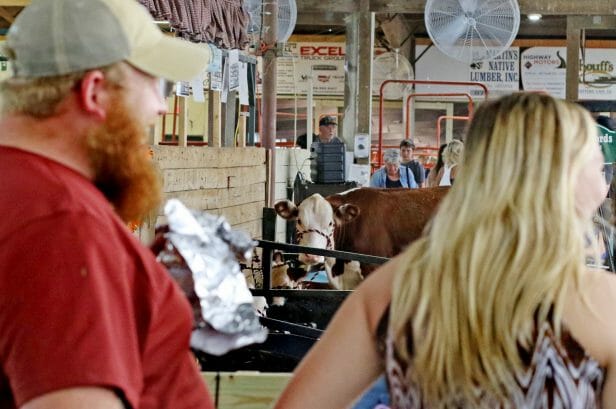 A Hereford, one of the prime beef breeds, awaits showtime in the cattle barn at the Rockingham County Fair. Rockingham County is the state’s second-leading beef county, after Augusta County, its neighbor to the south. 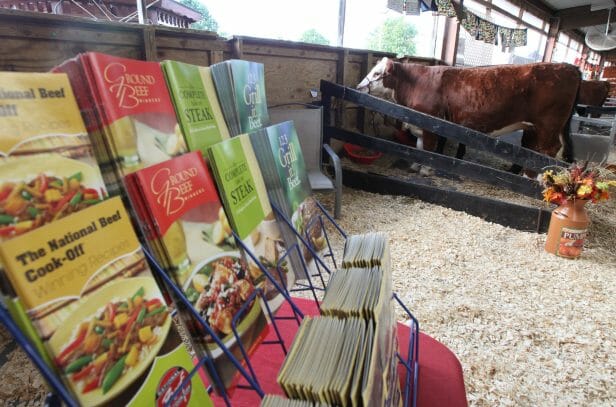 Awaiting showtime in the livestock competition, a Hereford eyes the beef literature. 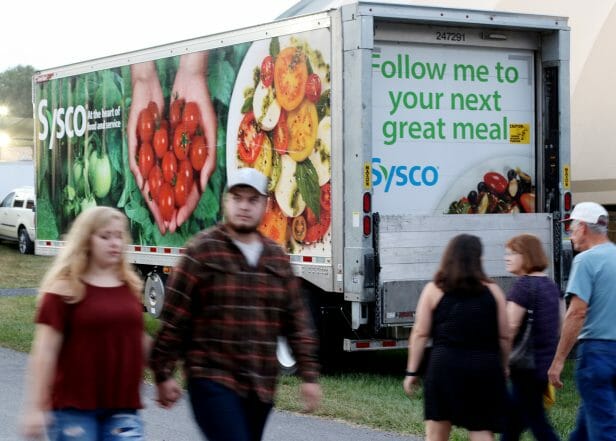 A Sysco truck brings supplies to food vendors. The company, which employs 450 workers in Harrisonburg, partners with the Local Food Hub, a Charlottesville-based coordinator of local growers. According to its website, this allows Sysco Virginia to deliver more than 250,000 pounds of local produce to market each year. 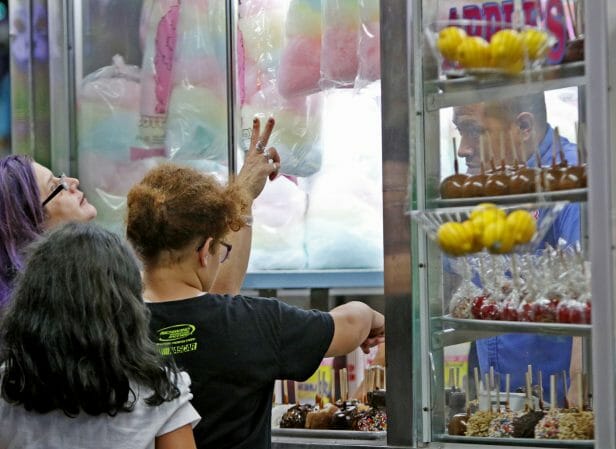 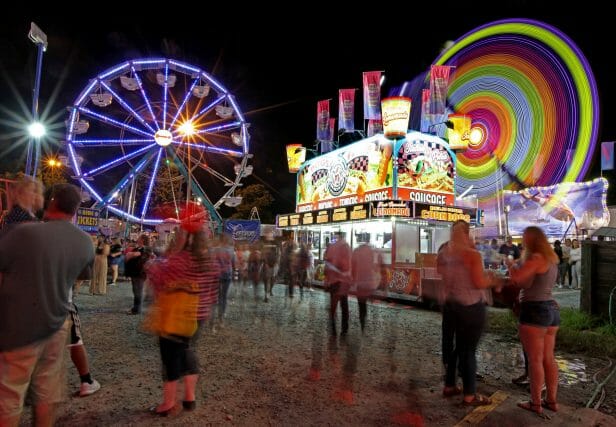 As some fairgoers spin at the Rockingham County Fair in this long exposure photo, others line up for corn dogs, burgers and fries. 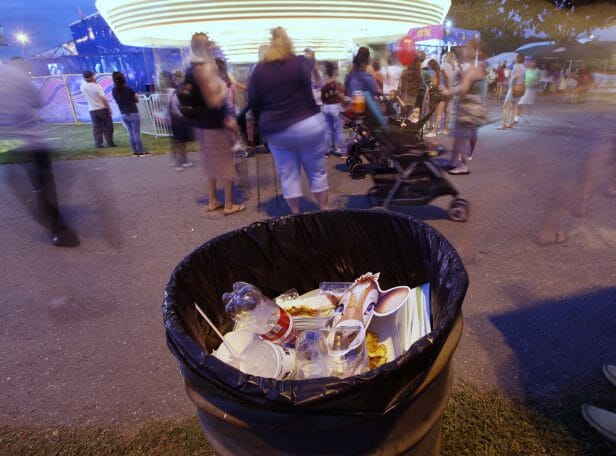 Trash cans fill up as the night goes on at the Rockingham County Fair, where crews work hard to keep everything tidy throughout the week. 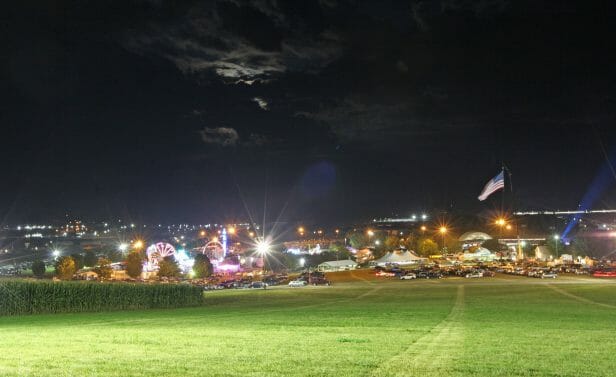 This year, the Rockingham County Fair Association marks the 70th anniversary of its annual fair. Its first edition was held in 1949 at Linville-Edom High School. It then moved closer to Harrisonburg on Kratzer Road, before settling at its current location south of town in 1980.