Updated 9:49 p.m. Oct. 3 to include the names of the Democratic candidates for council.

“We have a chance for the first time in my experience in Harrisonburg to sweep a city council election, and we could very well have a lot of confused voters,” said Alleyn Harned, chair of the Harrisonburg Democrats.

Frank McMillan describes himself as “a Harley-Davidson riding, free spirit kind of person.” He said he doesn’t embrace a position based on one of the party’s platforms.

“I like some of the ideas the Republicans have and I like some of the ideas the Democrats have,” he said. “A lot of times a political party has national interests at hand, and it doesn’t really affect what’s going on at the street level. But if you feel like you have to vote for any particular party line, then you may not be representing the people in the city best.”

While McMillan is worried about city tax rates, he also supports increased initiatives to help struggling teachers, law enforcement officers, and even a city greenway. But, he adds, that support depends on how much bang the city can get for its buck.

“I mean, when you say government, you ultimately know that there’s waste. I mean government and waste are synonymous; everywhere from the federal level all the way down to local levels,” McMillan said.

Fernando Espinoza, a member of the JMU College Republicans, volunteers for McMillan. Espinoza can’t quite remember where he’d met McMillan but supports him because of his stances on taxes and economic growth.

McMillan also has support from Republican state Del. Tony Wilt and Democrat Larry Rogers, the first black mayor of Harrisonburg, according to McMillan.

“This is our backyard. This is where we live, work, and play,” said Frank, who served on city council for a total of eight and half years and was the first woman to serve as Harrisonburg’s mayor. 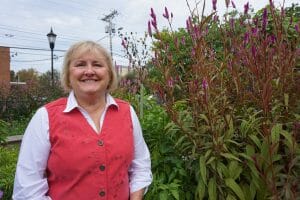 Frank, who was mayor from 2000-2002, made the “11th hour” decision to run this fall citing her concern with the “rate of increases in the tax rate” along with the “financial stress the city was under.”

“I’m just surprised at how fast our budget has grown and how many increases we’ve had to have in taxes,” she said.

Frank said she said hopes that message will resonate with Democrats as much as other voters.

She has spoken to two otherwise staunch Democrat voters, who have mentioned they will be voting for her in the election.

“I think it drives poverty more when you keep raising taxes because the landlords are going to raise rent to cover that, and we’re already talking about we don’t have enough affordable housing in Harrisonburg,” Frank said.

Lowering taxes is traditionally a major tenet of Republican campaigns. But Frank said she’s not trying to hide who she is by running as an independent.

“I’ve never run as a Republican. Never,” she said.

Frank ran twice, unsuccessfully, as an independent to represent the 26th delegate district in Richmond – the seat Wilt now holds.

“You just can’t run as an independent, it would be almost impossible.” Frank said of state legislative races. “The Democrat raised $250,000 and the Republican raised $250,000. So that was a lot of money coming in from outside interest. It’s unusual to see that in local politics.”

Party labels typically serve to provide voters a general idea about a candidate’s political philosophies – a political shorthand of sorts.

Frank believes the independents outnumbering traditional party candidates is good for the public, especially as the ballot does not place party identification alongside city council candidates.

And independents have been successful in recent elections, such as Abe Shearer, who won a council seat in 2012 as an independent with fiscal conservative philosophies.

George Hirschmann is a current independent sitting on the city council, who won a seat one of three council seats in 2016 with 24.1% of the vote.

“To me, [being an independent] is self-explanatory – try to go down the middle,” Hirschmann said. “Try to keep in mind what I think is best for the city and there’s some stuff that comes up on council and its down party lines … I certainly lean to the more conservative side but I’m not against spending money if it’s for a good purpose. Make it happen.”

Hirschmann said he believes candidates and officials who identify more with a party are more likely to be influenced by the party than by the public.

“I’m noticing, it’s Washington or it’s Richmond or it’s the state or maybe it’s Harrisonburg, and you find people I think who are more concerned with getting reelected than the issues,” Hirschmann said.

The Citizen reached out to officials from the Harrisonburg Republican Party but numerous requests for comment went unanswered. Officials with the Rockingham County Republican Party referred questions back to the city party leaders.

“He’s very clearly a Republican,” Harned said. “When he attends events, he sits next to the Republicans. When he votes, he votes with the Republicans, but he grabs that independent heart string that we have, and he won by just a handful of votes.”

But conservative candidates aren’t the only ones using the independent brand.

Paloma Saucedo entered the campaign after consulting with friends, family, and other activists. And she’s sought to carve out a space at a different end of the philosophical spectrum.

“We want to create organized political force that will hold our politicians and our parties accountable,” she said. “As an independent candidate, we want to build independent power, and its informed and its grassroots power, especially with people that don’t feel identified by either party.”

When an independent shares positions with a traditional party candidate, this can lead 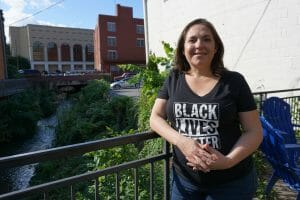 to what’s called ticket splitting, or “spoiling.” For instance, an independent could draw enough support from one party to prevent a party-affiliated candidate from winning.

Thus, Paloma’s candidacy remains a sore spot with some Democrats.

Paloma said that’s not how she believes voters should view her candidacy.

Paloma is running a progressive campaign, based on tenants of social and environmental justice.

“Yes, I am an independent, but yes I am also progressive,” she said. “If you have looked at our sign and our logo, it’s the rainbow. We are in the rainbow wave. That’s another sign people can look at our sign, and be like they’re independent and they’re progressive.”