Editor’s note: The Citizen will publish an online voter guide later this month in conjunction with the James Madison Center for Civic Engagement, which is mentioned in this article, and honors students studying political science with Dr. Andreas Broscheid.

Updated Oct. 6, 2018, with changes organizers made to the town hall schedule.

Instead of just hoping JMU students show up to vote in the Nov. 6 election, many of the candidates in the biggest races affecting Harrisonburg will bring their campaigns directly those JMU students on Wednesday, Oct. 10.

Candidates or representatives from Virginia’s U.S. Senate race, the open 6th Congressional District contest and those running for two open spots on the Harrisonburg City Council will embark on an old-fashioned barnstorming bus tour – bus-storming? – to three JMU residence hall areas. It’s being billed as a Traveling Town Hall, complete with free pizza and the candidates’ best talking points. Each candidate will have between five and seven minutes to address the audience of first-time or relatively new voters.

Republican congressional candidate Ben Cline was invited but had told organizers he wouldn’t be able to attend. Cline campaign spokesman Dan Webb said Thursday morning he didn’t know whether anyone would speak on Cline’s behalf.

In addition, all five Harrisonburg city council candidates vying for two seats will attend – or at least send someone to speak on their behalf, said Carah Whaley, associate director of the James Madison Center for Civic Engagement, which is hosting the event along with JMU’s Office of Residence Life.

The event won’t be open to community members because it will happen on university residence hall property.

The city council candidates will speak from 6-7 p.m. at the Grace Street Apartments.

The candidates and campaign representatives for the U.S. Senate and 6th congressional races will travel to Eagle Hall on the old part of campus and Shenandoah Hall on the campus’s east side between 7 and 9 p.m.

The parade of candidates embarking on a three-hour sprint across campus signals a change in approach to help students plug into electoral politics.

“We can’t just be in our own little bubble,” Whaley said. “There are issues that affect everyone who is here … And we’re hoping this will help students be more informed about those issues and to go vote.”

That’s why Whaley, who as the Madison Center’s associate director oversees the Dukes Vote initiatives, wanted to bring the election to where the students were.

Past candidate forums aimed at drawing students have attracted far more community members than students in the past. And that lack of student interest in the last mid-term election translated into single-digit voter turnout by JMU students.

In 2014, 8.8% of JMU students voted – less than half of the national average of 18.8%, according to the National Study of Learning, Voting and Engagement conducted by Tufts University. That was before the city of Harrisonburg, working with JMU leaders, created a new precinct, aimed in part to make it more convenient for students to vote.

But convenience is only part of the equation of increasing turnout. Whaley said hearing directly from the candidates not only allows students to make more informed decisions for the upcoming election, but she hopes it will help them become more invested in the democratic process for life.

“We feel there’s a broader opportunity for civic engagement,” she said.

As for the candidates, they’ll try to tap a substantial well of potential voters. JMU has an enrollment of more than 20,000 undergraduates and another 1,800 graduate students.

Some students already are registered to vote in their home towns and can vote absentee. But others could choose to vote in Harrisonburg before Virginia’s voter registration deadline Monday, Oct. 15.

For Jennifer Lewis, the Democrat running to replace retiring Republican Rep. Bob Goodlatte, it’s an opportunity to stress some of her anti-establishment messages, such as frustration at government corruption and the “stranglehold that banks and financial institutions” have over people with student loans, said Josh Stanfield, Lewis’s campaign manager.

“This is a group that could most directly relate to Jennifer and her message,” Stanfield said of JMU students.

Cline and Lewis agreed to their first debate at Spotswood High School on Sept. 17 and fielded questions from a panel of student government leaders. The other two debates – Sept. 21 in Roanoke and Oct. 22 in Lynchburg – were both requested by civic groups, while Cline turned down requests by JMU and Washington and Lee for debates on those campuses, as The News Virginian reported.

In the Senate race, Kaine and Stewart are coming off their final forum, a contentious debate Tuesday at a Richmond television station. The two kicked off the election season with a debate in front of a college audience at Virginia Tech on Aug. 24.

Five candidates are vying for Harrisonburg council: Democrats Chris Jones and Sal Romero, as well as Carolyn Frank, Frank McMillan and Paloma Saucedo, who are running as independents. 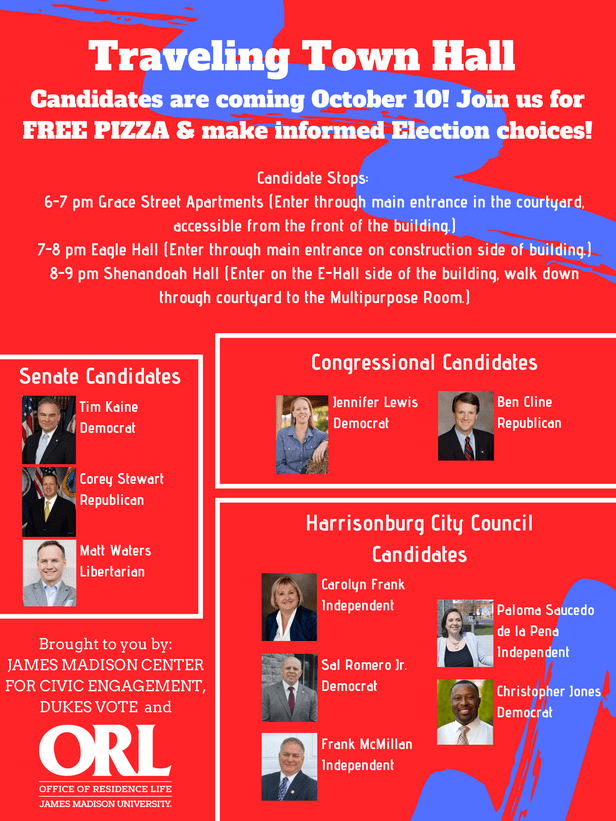