Looking For A Home 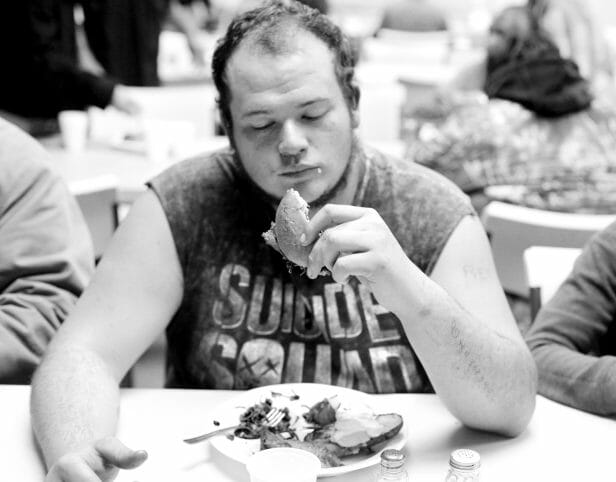 “Some people choose to live this way…you’re free. No taxes, no rent, no bills…,” Thompson says as he moves on to his corn and baked potato. Sitting next to him is John Revercomb, 21, who sips coffee along with many of the other shelter guests. 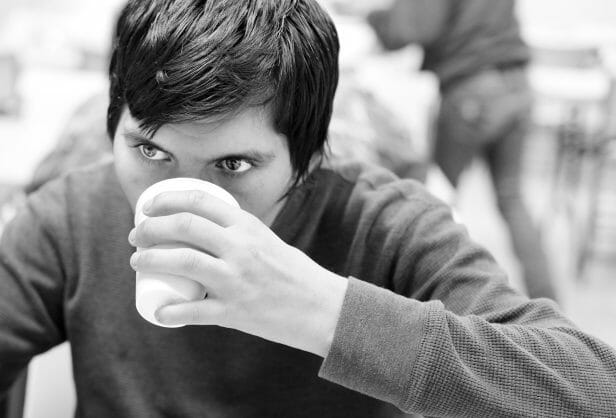 Blessed Sacrament rotates on a weekly schedule with 15 other places of worship in Harrisonburg and Rockingham County that take in homeless guests every evening from November to April as part of Open Doors, a seasonal thermal shelter. Open Doors only has 40 beds available each night, so sometimes people are turned away when capacity is reached. Because the shelter is open to anyone, including registered sex offenders, guests must be at least 18 years old. 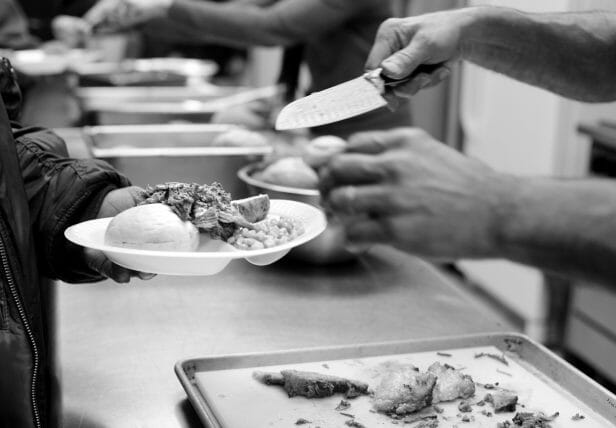 Thompson says he is currently job hunting, but also takes on any odd jobs that come along, such as shoveling sidewalks or cutting tree limbs. “Idle hands are the devil’s playground,” he advises those around him. He hopes to find work doing auto body repair. “I’m making 2019 my comeback year,” Thompson announces, noting that he prefers the countryside where he grew up to city life.

Nevaeh Grace winds her way under tables and around chairs, sniffing for crumbs as her owner, Angie, tugs on her leash. “She’s our mascot,’ says Angie, who declined to be photographed. “She loves everybody here.” Navaeh, which as Angie explains is “Heaven” spelled backwards, has been faithful in her duties as a service dog. She detects when Angie will have a seizure, as well as alerting other guests when their blood sugar level crashes.

Angie’s ex-fiancé, Barry Vincent, originally of Philadelphia, has been in Harrisonburg for 13 years. He started using the services of Open Doors for the first time a year ago until he can get “a place worked out.” Vincent hugs the big brown pit bull terrier and scratches behind her ears as she leans against him, loving the attention. “We were together for four years,” he says of his relationship with Angie and Nevaeh. 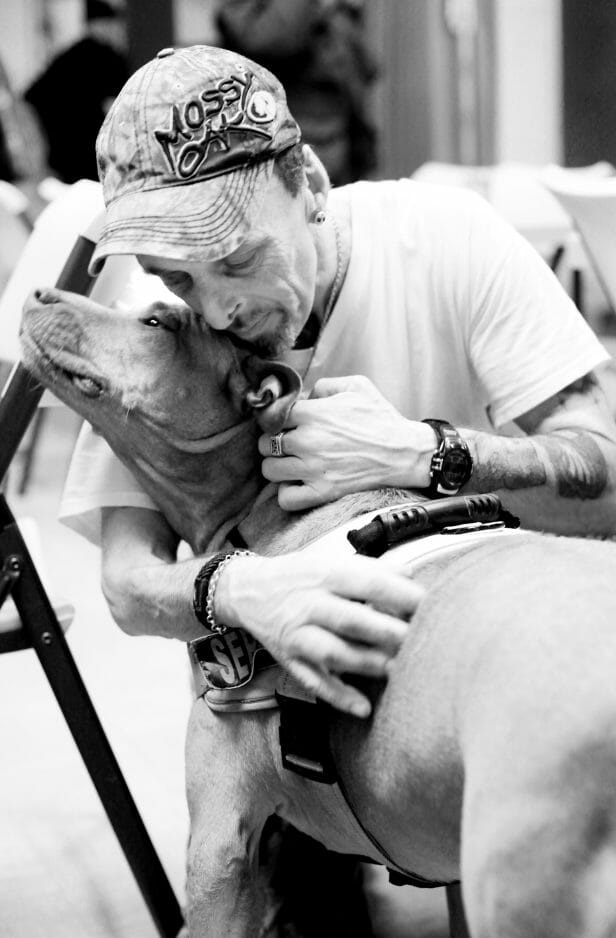 Robert Bundy of Luray recently came to Harrisonburg looking for an apartment near his relatives. He has only spent a few nights in the shelter while looking for a job, but says it’s hard to get someone to hire him because of his felony conviction. 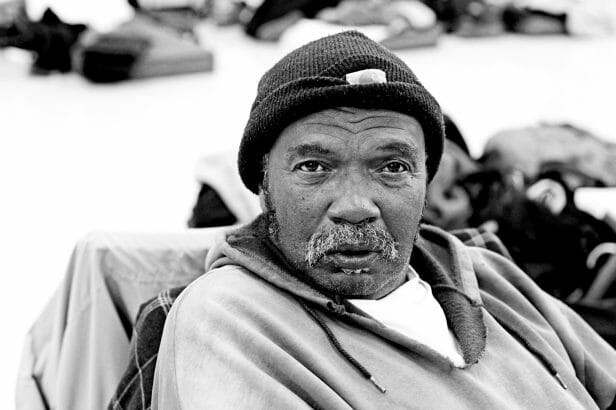 He sits in a chair next to his bed, a sleeping pad on the floor that is lined up alongside the rest of the beds in the men’s sleeping quarters. 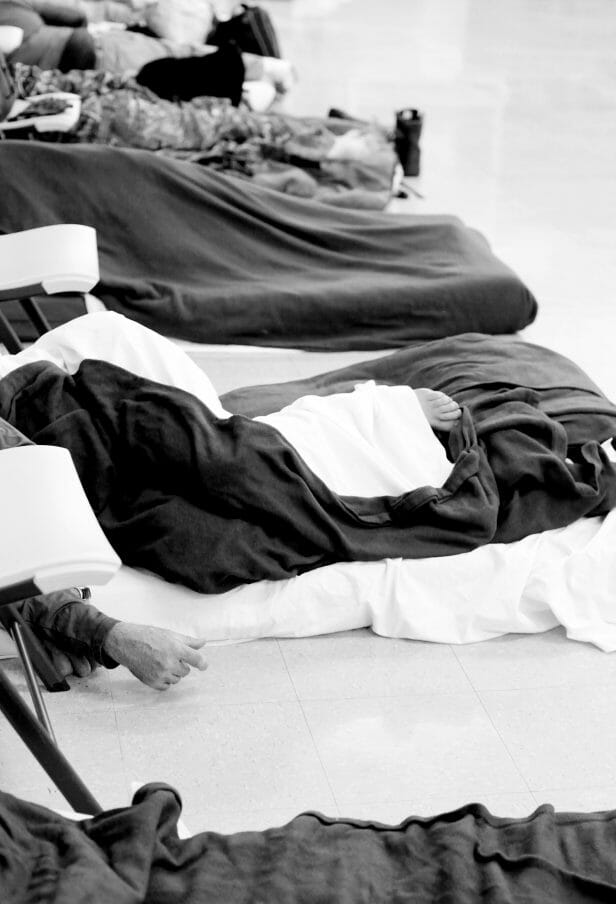 Downstairs in two Sunday school classrooms, the women each have their beds and belongings lined up against the walls. Some are already asleep, covering their heads from the lights that won’t be turned off until 10 p.m. Twenty-seven-year-old Melissa Rickard Halterman watches a program on her phone. “I grew up everywhere, as a foster kid,” she says, but Harrisonburg has been her home for the past six years. 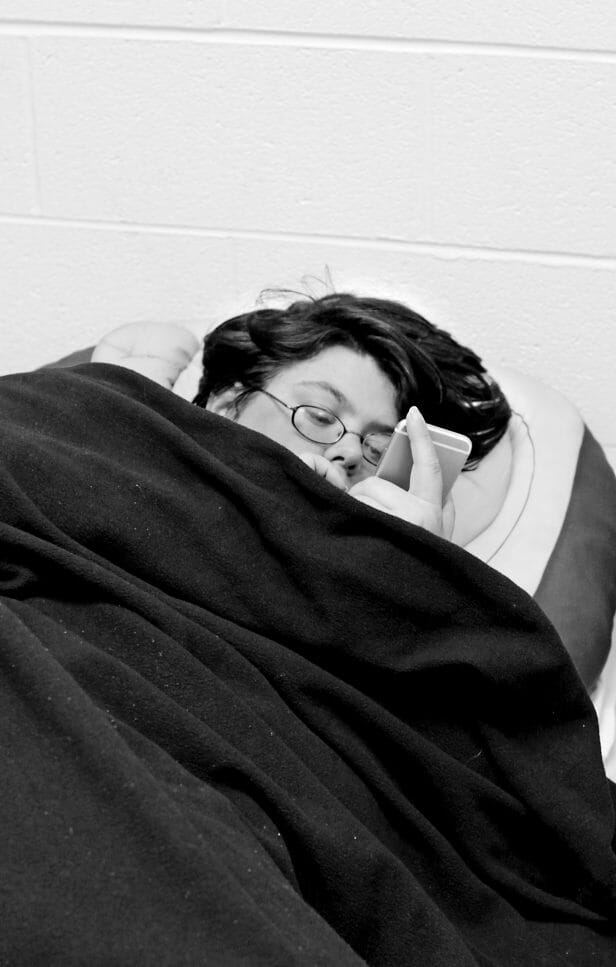 She and her husband, who is upstairs in the men’s sleeping area, have been staying with the Open Doors shelter until they can find a place to live. Halterman said she had a job lined up through Kelly Services, but it fell through. She spends her days around downtown staying inside various places depending on what’s open. The Massanutten Regional Library and Our Community Place (OCP) are two spaces that offer a warm place to sit during the day.

Halterman and Bundy agree that there needs to be more shelters available to the homeless.

“Some places are better than others, but there are many limitations at other shelters,” Halterman explains, pointing out that some are just for abused women or pregnant women, while others cater to families and exclude felons and registered sex offenders.

“OCP is open to anybody…as long as you have a belly button and breathe,” she adds, noting that she spends time volunteering at the community center. Although all of the places of worship on the Open Doors shelter rotation are hospitable, her favorites are the ones that have showers, which Blessed Sacrament does not. 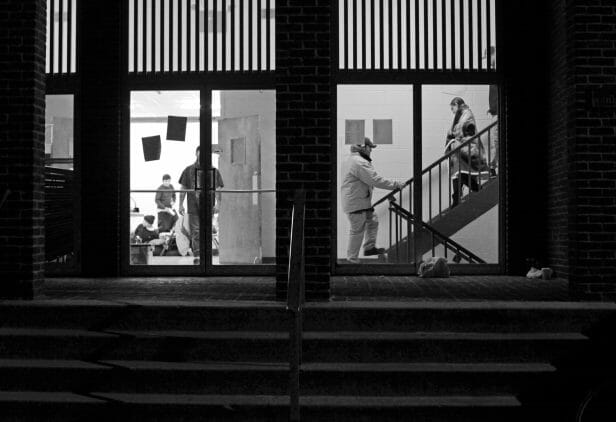 While Open Doors staff do a verbal confirmation that guests do not have any drugs, alcohol or weapons on them, they are allotted several smoking breaks throughout the evening. Guests are asked to step outside the church’s doors to smoke, but warned that if they leave the steps, they won’t be allowed to return to sleep at the shelter.

Harrisonburg and Rockingham County saw an increase in their homeless population from 127 in Jan. 2017 to 149 in Jan. 2018, according to a survey from the Department of Housing and Urban Development, even as the nation’s jobless rate continued to decline. As of September, unemployment rates are among the lowest in the state for Rockingham County, at 2.4 percent, while Harrisonburg’s are a bit higher at 3.3 percent. The statewide rate is 2.7 percent – lower than the national unemployment rate of 3.7 percent.

In an interview with the Northern Virginia Daily, Michael Wong, executive director of the Harrisonburg Redevelopment and Housing Authority, attributed the increase in homelessness in the city to the cost of housing.

“The affordability of housing is one of the big reasons,” said Wong, quoted in the story about the persistence of homelessness in the region despite low unemployment. “The economy isn’t improving minimum wages and many homeless who are working can’t make enough money to survive with housing costs increasing,” he continued.

By 6 p.m. on the Saturday after Thanksgiving, a crowd is already congregating around the side entrance to Blessed Sacrament. Homeless guests, bundled in heavy coats, huddle together with their belongings in backpacks, bags and carts. Some have stuffed animals and pillows that they bring to the shelter each night, while others, standing with their hands in their pockets, will use the bedding provided for them. 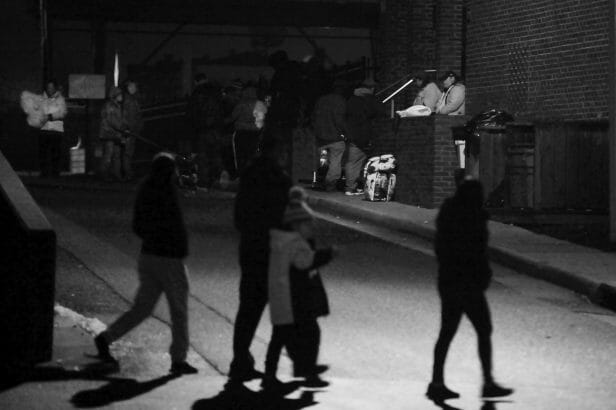 Bundy leans against the mural of Lucy Simms that graces the Federal Street side of the parking deck, the portrait’s eyes gazing out over the crowd. Still looking for a home, he has welcomed the shelter as his refuge each night this week. With many downtown spaces closed for the Thanksgiving holiday, Bundy said he wishes there was a place that gave 24-hour shelter from the elements. 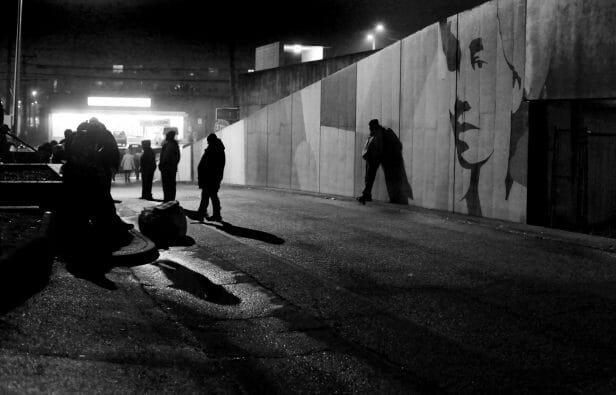 Saturday was a particularly difficult day to be without shelter, as temperatures hovered around freezing and inches of rain fell. Bundy says he hopped from one place to another throughout the day. “I spent some time at Burger King. Then I went to the barber shop and got a haircut and they let me stay there for a while. The barber even gave me an umbrella when I went to leave because it was raining so hard.”

In a few minutes the doors at Blessed Sacrament will open as the Harrisonburg community extends their umbrella over the city’s homeless residents.