When a group of JMU students talked with male residents of the Gemeinschaft halfway house about hope, what emerged was an overwhelming desire among the men to avoid repeating mistakes that landed them in trouble — but also to pass on what they’ve learned to others.

That sentiment inspired the lyrics to “Real Change,” one of six songs performed Monday night at the Story Table event, a collaborative effort between Gemeinschaft Home residents and JMU social work and music students.

Standing in front of more than 70 people, including the men from Gemeinschaft Home, at Merge Coffee Co. and Bowl of Good, Robert McCoubrey performed “Real Change” with only his acoustic guitar. 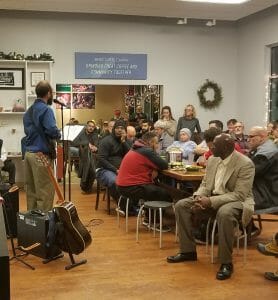 “We’re not talking about cold dollars and dimes. We’re sitting here talking about our lives,” McCoubrey sang. “We’re talking about real change. Empty pockets with no cents, you get out what you put in. If you want a change, well—you can’t stay the same.”

This Story Table event was the culmination of an eight-week collaborative musical-storytelling project undertaken by six James Madison University students and the residents of Gemeinschaft Home. Situated off Mt. Clinton Pike, Gemeinschaft Home is a residential, transitional home for men who have been recently incarcerated for nonviolent, non-sexual offenses. Gemeinschaft, meaning “friendship” or “community” in German, is a place where the men can find social support while putting their feet back on the ground.

This is not the first time JMU has partnered with Gemeinschaft to put the residents’ life stories to music. After obtaining a $20,000 grant last summer through the National Endowment of the Arts Research Program, JMU faculty David Stringham and Jesse Rathgeber of the music school and social work professor Cindy Hunter decided to use the money to initiate the project “Transitioning & Traversing: Stories and Songs of Incarceration, Equity, Justice, and Community.” The program first presented their work on May 17, hosting a public performance at the Forbes Center.

When the baton passed this semester to McCoubrey, an adjunct professor, the public event portion of the project took a new direction, resulting in what the group decided to call Story Table.

Every Monday night for the past semester, the students have worked with the men at Gemeinschaft to help them share their stories through music, teaching the men to compose their own lyrics, play instruments, and sing. The students are the primary facilitators, planning and implementing the programming of each session.

The students would offer a prompt, such as choosing between four genres. The men would split up into different groups accordingly, and then discuss what they wanted to write about. The goal, McCoubrey said, is to provide a comfortable space for the men to share their stories.

One song, called “Trapped,” came from one of these sessions. One resident said, “I want to write about feeling trapped.” Then he offered the first lyrics: “My mind is racing, always pacing,” and the group filled in the rest together.

“It’s just getting to know people, learning about their day and their perspectives on the world, and go from there,” she said. “You can’t express yourself to others unless you form relationships.”

This has been Gracie Cuevas’ third semester working with the program, having played a role in the research and planning portion, and then two semesters of interacting with the Gemeinschaft residents.

“Often when you walk around with a felony, people treat you a certain way,” Cuevas said. “And that’s part of what this is about, breaking down that label, that stigma. There’s a very human side to this, and we need to start from that point.”

“Until we learn to connect one-on-one, until we learn the real story… once that happens, we can start to heal,” he said. “We can have a more just, compassionate society. Harrisonburg is called the ‘friendliest city.’ We should be pushing that and making that real.”

Along with the music performances, several residents of Gemeinschaft shared their thoughts and experiences with the audience by passing a microphone around the long “story table” that stretched across the room. Most residents expressed their gratitude for the Gemeinschaft program, and a desire to start down a new path.

One man, who identified himself as Andrew, said he had been locked up most of his life.

“Never been out longer than a year,” he said. “Gemeinschaft has given me the opportunity to get a job, straighten my life up. I got accepted at AU, so I’m trying to do that. If not for Gemeinschaft, I would be in jail doing none of that.”

Another man, Kyle, said he’s trying to make this next chance count.

“I find myself thinking in the long term now, instead of living in short bursts of chaos,” he told the audience. “There’s a lot of work to do, but I’m trying now.”

Residents said one of the most difficult parts of the Gemeinschaft program is having to leave after the 90-day transition period is up. Several men said they came from towns with far fewer opportunities than Harrisonburg.

“There’s no jobs, nothing,” said Travis, one of the residents. “Here, they’ve found something. They’re working, making money, they’re going, and then all of a sudden, we can’t stay here anymore, and that brings them back down.”

And the ability to convey powerful messages, whether put to music or spoken, made it a compelling event for those who attended.

“Stories are sacred gifts and our community can honor each other by listening to them,” reflected Ernie Didot, husband of the owner of Bowl of Good, Katrina Didot. “To be fully human is to tell stories and have your stories heard.”

Lily Gates, one of the students who performed, said the experience sharing the men’s stories through song was an honor. “I think the hope is that it’s better to do good, even if we’re doing it imperfectly, than to not share the stories at all.”