Some city board applicants don’t fill out their paperwork but get appointed anyway. The council is considering changing that.

Updated Feb. 3, 2019, with new information regarding one of the board nominees. 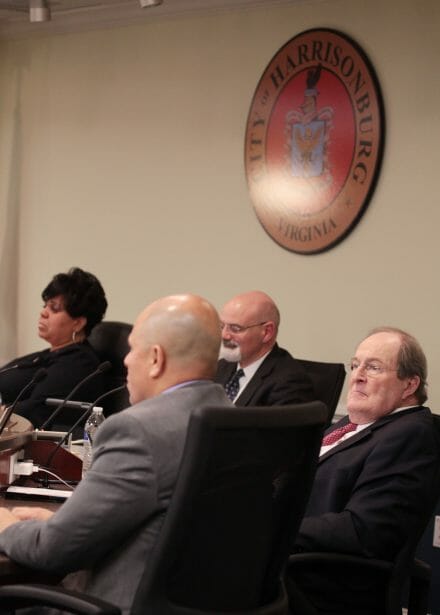 Harrisonburg City Council members will consider establishing a clearer process for making appointments to city boards and commissions after the issue arose for the third council meeting in a row Tuesday night.

This time, the question of how to assess candidates who volunteer for those public boards and commissions came up during the appointment of two seats to the Parks and Recreation Commission.

In this case, some applicants fully filled out the commission application, which asks questions about why the person wants to serve, how the person learned of the opportunity, what relevant experience the person has and past community involvement. Other applicants didn’t fill it out but put forth only their name for consideration.

Vice-mayor Sal Romero brought up the fact that, while multiple council members knew the “integrity and commitment to the city” of Parks and Recreation Commission applicant MuAwia DaMes — based on his performance on the city Planning Commission — they did not have a fully completed application and questionnaire from DaMes.

UPDATED: During the retreat Feb. 3, City Attorney Chris Brown clarified that all the Parks and Recreation Commission applicants, including DaMes, had turned in a completed application but a “computer glitch” prevented the applications from being sent to the City Council members. Brown said that problem occurred before with changes in city ordinances not appearing updated on devices in the council chambers.

It  is not uncommon among volunteers for city-appointed positions, council members said.

“It just seems strange to me that we have done this for such a long time, and we don’t have a clear process that is consistent, transparent,” Romero said after the meeting. He added that he is not calling for additional documents, just establishing a “bare minimum” requirement for applicants to complete the existing application materials. “I think it’s important for the public to understand … the process that we follow.”

It’s one issue council members said they expect to discuss during their retreat Feb. 1-3.

“That’s something we need to look at, besides right here,” said Mayor Deanna Reed.

Council member Richard Baugh also suggested the council review the issue during their retreat. The council then voted unanimously to appoint Donna Armstrong and DaMes, despite his incomplete application, to the commission.

Reappointment to boards and commissions, normally a noncontroversial function of the council, has garnered an usual amount of attention over the last month.

At its Dec. 11 meeting, the council put off making any appointments. At the time Councilman Chris Jones and Reed said they’d like to see more volunteers for these roles on public boards, such as Parks and Recreation, the Harrisonburg Electric Commission and Planning Commission.

Then, at the Jan. 9 meeting, council again put off making appointments to the Harrisonburg Electric Commission because, Jones said, the commission was supposed to put forward three nominees for each position. The commission, which needs to fill two spots, submitted three names for one of them. But for the other, the HEC simply requested the reappointment of commissioner David Frackelton, who was named to that position in 2017 to fill out a term that expired last December.

The decision to put off the appointments for the second time came as a local environmental group, Renew Rocktown, held a press conference asking for more transparency in the appointment process and circulated a petition questioning Frackelton’s reappointment in light of articles he posted to Facebook that dispute the scientific consensus on climate change.

At Tuesday morning’s HEC meeting, commissioners during a closed session selected two slates of three nominees — one for each board position up for appointment. Those slates will be forwarded to the city and are expected to be up for consideration at the next council meeting Feb. 12, said Brian O’Dell, the HEC’s general manager. O’Dell declined to release the names of all the nominees until he had informed each of them.

Frackelton, though, confirmed after the meeting that his name was on one of the slates.

He said he was taken aback by the Renew Rocktown’s opposition to his reappointment and said his Facebook posts were just meant to “raise questions.”

“I am skeptical about everything, whether it’s what types of energy storage we should be using or what type of alternative energy we should use. Solar is not the only one out there,” he said.

He is most concerned, he said, with figuring out ways to reduce energy consumption.

In response to Renew Rocktown’s concerns, Frackelton said he believes climate change is happening, but he said given the size and mass of Earth and the energy humans use, “the idea that man is going to make a significant difference is pretty ludicrous.”

Frackelton, who runs a consulting firm Nuclean Energy LLC, fully filled out the boards and commissions application and offered a copy of the document to The Citizen.

His answer to the application’s question about “interests and concerns” he has about the community, he wrote that: “My concern is that HEC be able to provide customers, desiring to buy electricity from sustainable sources, a means of doing so.”

Only one selection for Housing Authority

Council members did debate appointments to the Harrisonburg Redevelopment and Housing Authority, which has two seats available and attracted three applicants.

Only one, Benjamin Fuller, gained appointment from the council.

“He actually lives in the neighborhood,” Reed said. The HRHA office is located in the Northeast neighborhood, as are the three properties it manages: Franklin Heights, Commerce Village and the two Lineweaver apartment buildings. The authority “aims to promote adequate and affordable housing, economic opportunity and a suitable living environment free from discrimination,” according to its website.

“I really want to have someone who actually lives in the Northeast neighborhood” on the board, Reed said after the meeting. She would also like to see a commissioner who lives in one of the public housing buildings that the board oversees. The application is available online at www.harrisonburgva.gov/boards.

The council voted to:

— With reporting by Ryan Alessi from the HEC meeting.