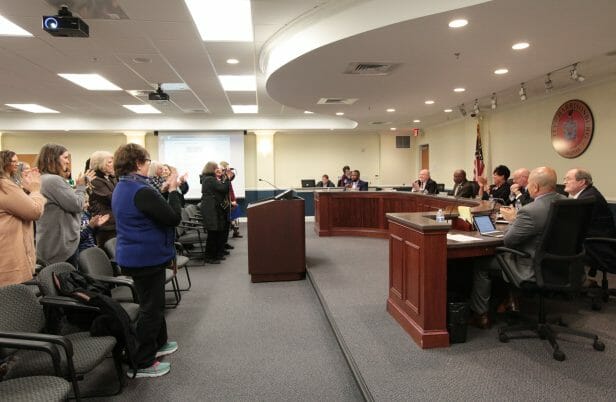 By Randi B. Hagi, contributor // photos by Holly Marcus

“Good job, ladies! Good job,” said Mayor Deanna Reed, before a standing ovation from about 80 people at the city council meeting on Tuesday evening. The applause celebrated the council’s support for Virginia ratifying the Equal Rights Amendment. Small girls with their mothers and men sporting ERA buttons were among those clapping alongside eight women who had worked on the issue since Congress first passed the amendment in 1972.

The Equal Rights Amendment would guarantee equal legal rights for all citizens regardless of sex, but requires ratification by 38 states to be added to the United States Constitution. Thirty-five states ratified the amendment in the 1970s. Nevada did so in 2017, and Illinois followed in 2018. Congress initially gave states until 1979 to ratify the amendment, but then extended the deadline to 1982. Still, advocates believe that completion of the ratification process in 2019 will be enough to change the Constitution for the 28th time.

Reed said that the city’s resolution, a symbolic gesture encouraging state legislators to support ratification, would be delivered to the General Assembly when it convenes today.

The board also postponed making appointments to the Harrisonburg Electric Commission for the second time in as many meetings. There are two vacancies on the commission. Council member Chris Jones pointed out that the HEC is required to submit three nominations for each vacancy. While it had done so for one vacancy, it had simply requested the reappointment of a second commissioner. Jones also suggested that each nomination come with a brief biography and reasons for a candidate’s interest in the position – something council requires for other boards and commissions under its authority.

The council then voted unanimously to request that HEC to provide six total nominations for the open two commissioner positions.

Just before the meeting, the group Renew Rocktown held a press conference calling for more transparency in the appointment of commissioners who oversee HEC. As of Tuesday night, more than 250 people had signed a petition to that effect, also led by Renew Rocktown.

When asked later if outside groups had brought the nominations issue to his attention, Jones simply said, “no, I can count” – a reference to the language in city code stipulating three nominations for each open seat on the commission.

Council member Sal Romero, in his first meeting since being elected to the council, announced his intention to introduce interpretation services to council meetings. He said that in the past few years he has attended council meetings as a citizen, he has not seen Harrisonburg’s diversity represented in the chamber.

“I do believe the barrier of language could be one of the main issues,” said Romero. “We need to create that culture of welcome, and I would like to work on that fairly quickly.”

Continued calls for a justice planner

The public comments portion of the meeting was lively – eleven residents participated, with five of them touching on criminal justice issues. Three were members of the organization Faith in Action, who addressed the dollar-a-day fee at the downtown jail to access the commissary, and asked the city to hire a justice planner. Jim and Diane Orndorff, members of the Valley Justice Coalition, expressed concerns about the costs of expanding the Middle River Regional Jail as well as the unknown circumstances around the firing of its superintendent last month.

Jones asked City Manager Eric Campbell to consider adding a criminal justice planner and a sustainability planner to the upcoming budget. He also suggested that Faith in Action leaders fundraise through their congregations to assist families struggling with the dollar-a-day fee, as decisions regarding that policy ultimately lay in the hands of the sheriff, not the council. “That’s something I’d give to,” said Jones.

Other notable moments in the meeting included: