From ‘bubble of fear’ to path of hope: Drug court’s effects beginning to be felt in Hburg

The courtroom was chilly as participants in the afternoon hearing on a recent Thursday trickled in. Some were alone, others entered with partners and family members.

But this wasn’t like many other court proceedings, marked by tension and conflict. Those filing in greeted each other warmly by name, asked about each others’ children, cracked jokes, and discussed their own and others’ legal cases as they waited for their turn with the “treatment team.” This is the weekly drug treatment court program in Courtroom B of the Rockingham County Circuit Court downtown. 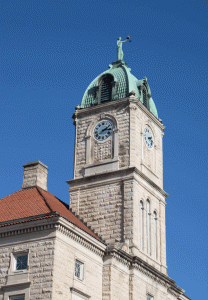 The Rockingham Harrisonburg Drug Treatment Court Program, which began in 2017, is an addiction recovery program which allows nonviolent, repeat offenders, who plead guilty, to have their sentencing delayed until they complete the rigorous two-year process.

The treatment team they work with includes court coordinators, mental health professionals, probation officers, law enforcement and a judge who meets with each participant individually before the proceedings begin.

One man is expecting a child in the next few weeks. Another, upon learning this, offered to bring him diapers. The participants range from young adults to middle-aged. Most are white, but the group of about 20 is racially diverse.

Once the hearing began, the judge called each participant up to the dais, to review their progress in the recovery program and in meeting life goals. The group applauded one young man who had been promoted in his job at Shenandoah Growers, and was awarded for achieving “60 days clean.” They sat solemnly while a police officer led one participant from a back door. He was currently incarcerated and had tested positive for cocaine.

When it was Ernie Cleveland’s turn, Judge Clark Andrew Ritchie – one of three judges who take turns ruling over drug court – commended him on his progress.

“I understand you’re interested in becoming a peer specialist,” Ritchie said. A peer specialist is someone who, through training and their own experiences with mental health or substance abuse, supports others in recovery programs.

‘A road was made for me’

Cleveland’s interest in helping others who have struggled with addiction comes from “a heart to help people” that he discovered after volunteering with local nonprofits.

Cleveland grew up in Palm Springs, California, near Los Angeles, where he said methamphetamines abuse was rampant. He began using methamphetamines when he was 16, and started racking up minor drug charges. He says his life continued on a regular downward spiral until three years ago, when his sister, who lives in Harrisonburg, became pregnant. Their mom put their house up on the market to move east.

“I was in L.A. somewhere, and she came and found me, and scooped me off the street. I was a mess,” Cleveland said.

After moving to Harrisonburg, he found another meth network, and started using again.

Within a year Cleveland was arrested on three counts of possession. He said the local drug task force used “small time drug users” to lead them to other users so that the informants could potentially avoid charges.

“My court case had been going on for 18 months, during which I remained clean,” he said.

methamphetamines and a pipe, and a charge of attempted distribution. He completed his first year of the drug court program in December, and doesn’t know how much longer he’ll be required to participate before having to face a new sentence, which he hopes is altered in light of his recovery.

Cleveland said he’s had other opportunities to go through recovery programs before, but wasn’t ready to take advantage of them.

“I am a man of faith … that little last bit of hope, which was like a speckle of dust … I just grabbed ahold of it, and a road was made for me,” he said.

Cleveland said he’s especially thankful to have been reunited with his family. Some in drug court are not so fortunate.

“I went to my family and I just completely submitted to them,” he said. “Being able to be with my family, which I had not been with in 20 years was just incredible. And I was just so interested and into it. I would feel so sad about, gosh, what I had missed, but then I would get over it. I have this opportunity now.” That opportunity is “To be the good son, brother and uncle I was meant be.”

Cleveland was among the first half-dozen participants to join the fledgeling program, which is “designed fundamentally to get people in treatment instead of spending time in prison,” said Daniel Barrows, chair of the Valley Justice Coalition.  The coalition is a local grassroots organization which began advocating in 2016 for Harrisonburg to start a drug court program similar to those that have been around for years in other cities and states.

The program is designed in step-down phases, beginning with a time-intensive daily schedule of therapies through the Community Services Board, in-person and phone check-ins with the court system, urine screens, and weekly hearings before a judge. As they progress, the program supports participants in finding stable housing and jobs.

Barrows pointed to research that indicates that those who complete drug treatment court programs have very low rates of recidivism, and even those who start such a program but drop out are less likely to reoffend.

George Nipe, Therapist and Coordinator of Transitional Services at the CSB, explains that substance abuse “is inherently challenging to work on because the underlying issues that contribute to addiction are very complex and unique to each individual.  Similarly, each person’s journey in recovery is equally, if not more, complex and unique.”

But he said several factors are most associated with a risk of addiction, “with the most prominent likely being a family history of substance abuse and childhood trauma.”

Those with criminal and substance abuse histories must work hard to overcome that “stigma that follows them” too, he said.

“Addiction is a disease like any other,” Nipe said. “It affects a person’s ability to function, the symptoms will get progressively worse without treatment, and very often it can be deadly.  The members of our community who struggle with addiction do not deserve the stigma, but they do deserve our support.”

The program is aimed at the people who need a strong support network, accountability, and therapy to help them break the cycle of addiction.

Each participant gets an individualized action plan that takes into account their histories, current charges, health problems, employment and living situations.

Barrows and Cleveland both said they’ve heard some criticism of drug court, such as objections to any consequence besides prison time.

But Barrows said it’s cheaper than just incarcerating the participants and can help people from returning to bad habits that land them back in jail.

‘One bad decision away’

Cleveland, for one, appreciates this level of accountability, and the genuine concern of those who run the program.

In the first phase, the participants had to call Drug Court Coordinator Cary Justice every night at 8 p.m. to check in for their curfew.

“There is genuine care, to go the extra mile – for Cary to talk to us each and every one of us every night, it just set the stage for an extra motivation,” Cleveland said. “You’re just always one bad decision away from getting high … to live in fear that you’ll make that bad decision kind of doesn’t allow you to grow, because you just live in a bubble of fear. But knowing that they understood, and there was leniency … it just made me get out of that bubble of fear and start living.”

That leniency sometimes takes the form of a few days in jail, such as if someone tests positive for drugs or breaks their terms of probation. All participants waive their right to a lawyer for as long as they stay in the program, although a criminal defense attorney does sit in on the meetings before the Thursday hearing, to advocate for the participants if necessary.

For those who stay in the program, though, the few days in jail as an immediate consequence far outweighs the years of prison time hanging over their heads should they not complete it.

The program, which is only in its second year, is regularly being revised. Much of its policies were modeled on Winchester’s drug court program, which Garst cites as a successful predecessor.

The program got a boost last summer when it received a federal grant of $400,000 through the U.S. Department of Health and Human Services. But Garst doesn’t necessarily view that, alone, as a signal success.

“Grants are great. But in the end, if the community doesn’t invest in this, it’s not going to work,” said Garst, who hopes to grow the program from 22 to 40 participants in the next year.

“Marsha Garst really took to heart … and put in a tremendous amount of work to bring the drug court to Harrisonburg,” Barrows said.

For Cleveland, drug court has provided not only structure in his life, but also hope.

“I lived in fear for so long,” he said, “for those 18 months” before he was accepted into the drug court. “It was such a heavy weight: ‘what’s going to happen to me?’ I really just don’t choose to think about what the outcome is going to be after drug court, with my case, because I like what I’m doing. I don’t want to revert” to that fear.

Now he’s trained as an HIV and Hepatitis C tester and counselor through the Strength in Peers program and completed the training to become a certified Peer Recovery Specialist. He volunteers for the Harrisonburg Community Health Clinic, and he’s written a re-entry guide for incarcerated people who may have the option of drug court upon release.

Cleveland is a huge advocate for the drug court.

“Within drug court, people are reunified with their families. Their children get to have their father and their mother,” he said. “Everybody is working, and paying taxes, people are being part of the community in all kinds of ways — bowling leagues!”

Cleveland’s sister called on Tuesday to wish him a happy 45th birthday.

“Hold your head up,” she told him.