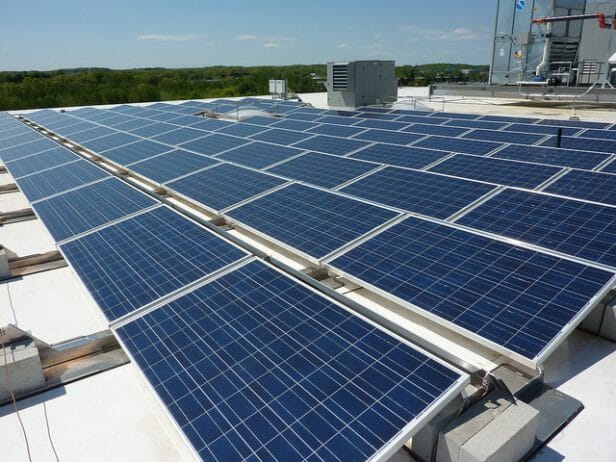 As the school board moves forward with plans to install 4 megawatts (MW) of solar generation capacity on several city schools, the Harrisonburg Electric Commission (HEC) has begun discussing the project’s implications. Given its scale, said General Manager Brian O’Dell, they are “not insignificant.”

As The Citizen reported last week, HEC says the planned schools project will result in a $225,000 net operating loss to its budget, even though the electricity generated by the schools’ solar panels will reduce the amount of electricity HEC buys from Dominion. That’s because HEC doesn’t sell electricity to the city schools, or any of its customers, at the same price it buys it.

O’Dell explained that HEC currently sells energy to the school system at 9.1 cents per kilowatt-hour (kWh). At that rates, HEC expects the planned solar project to reduce the city schools’ annual energy bill by $544,000.

Under its current contract with Dominion, however, HEC buys electricity at around 5.6 cents per kWh, meaning the school solar panels will allow HEC to realize an annual savings in energy purchases of an estimated $320,000. That works out to a net annual loss to HEC’s operating income of about $225,000, O’Dell said.

The markup in the price HEC charges customers includes systems operation and maintenance, depreciation and other fixed costs.

“There’s an amount that’s needed to operate, and that’s why we need to sell it at margin over what we purchase it at,” O’Dell said.

In a November article in The Citizen, O’Dell discussed a 1-percent-of-peak-load threshold for installed solar capacity in Harrisonburg. It was set to protect non-solar customers from inadvertently subsidizing the cost of solar energy, which is a concern, O’Dell said, because the utility’s fixed costs are built into the kWh cost that it charges customers. Under that rate structure, net-metered customers who reduce their electric consumption by installing solar panels end up paying less to maintain the HEC grid that they continue to use.

Last fall, before the city schools’ solar project was announced, total installed solar capacity in Harrisonburg had risen to around .82% of HEC’s peak load. But the schools’ planned solar array alone represents 2 percent of HEC’s peak load, and will push the city well beyond the 1-percent threshold it set for potential reevaluation of its net-metering policy. In other words, a conversation dealing with hypotheticals as the city approached the 1-percent threshold has now become reality for the HEC.

“In the life of the project – it gets pretty speculative after 5 or 10 years, but if you use the current escalators we have in place, after 25 years, we estimate a loss of $15 million in revenue and over $7 million in income,” said O’Dell. “That’s why we’re having to address this upfront, because in the long run, it’s pretty significant.”

And the way HEC moves forward could affect the city government’s budget as well. As The Citizen reported last week, HEC currently contributes about $5.2 million to the city’s general fund, which is more than $2 million above the amount it is obligated to pay the city. That additional contribution may be the most natural place for HEC to re-balance its budget line.

“There haven’t been any decisions made on this, however, it was mentioned as a possibility to be considered,” O’Dell said. “With that said, we felt it necessary to let the city manager know that it was brought up as an option.”

A final contract between the city schools and Secure Futures, the energy company partnering with the schools to implement the project, is still being negotiated. Until that contract finalized, the exact effects on the schools’, city’s and HEC’s intertwined budgets won’t be precisely known.