Story and photos by Randi B. Hagi, contributor 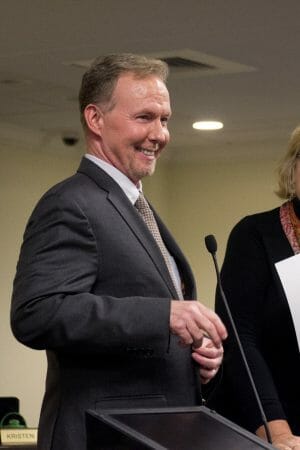 Michael Richards will start as Harrisonburg’s new schools superintendent on May 1.

Applause rained repeatedly down at Tuesday night’s unusually jovial school board meeting, where the city’s new schools superintendent was announced and raises for all city schools staff were proposed. The board voted unanimously to hire Michael G. Richards as superintendent, starting May 1.

“The proof in the pudding is seated before us,” said Vice Chair Andy Kohen. “We’re thrilled.”

Richards comes to the position from Loudoun County Public Schools, where he has served as Chief of Staff since 2015.

After the vote, he thanked the school board and Chair Deb Fitzgerald.

“Their process was careful, it was deliberate, and it was mission-driven. And that’s how I want to work with this board,” said Richards. He then thanked Interim Superintendent Patrick Lintner for his work in the position, earning Lintner a standing ovation.

“So, Harrisonburg city – what do you say we make education relevant and engaging for all students?. . . Let’s do that together, and in addition to that, let’s also teach them all the skills they need to be successful,” Richards continued, provoking yet another round of applause in the council chambers.

Richards then introduced his wife, author and educator NoNieqa Ramos, and their two children. “[Ramos] is an advocate for marginalized and underrepresented students, and she is a compass for me when it comes to equity.” 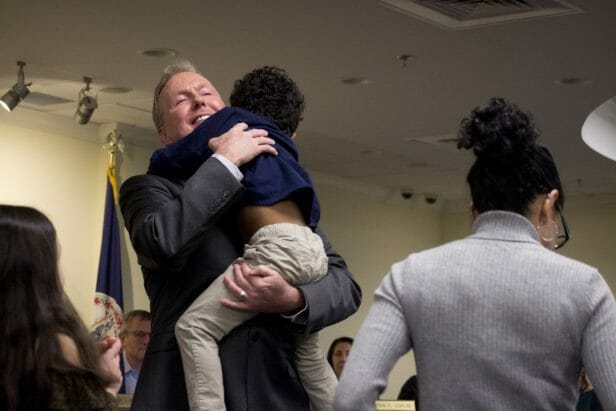 Richards was congratulated by his family after being announced as the next superintendent.

Brenda Sheridan, Vice Chairman of the Loudoun County School Board, told The Citizen, that Richard’s “voice of reason, sound judgment and willingness to have open and honest dialogue were invaluable” to her work as on the school board.

“I have always respected Dr. Richards’ work ethic, attention to detail and vast educational experience,” she said. “He has truly been an asset to Loudoun County Public Schools, and I was fortunate enough to not only work with him, but also call him a friend.”

According to the Dominion High School student paper, Richards set a precedent of reviewing each school policy every four years, or at any time a school board member requested so.

One of Richards’ primary responsibilities as chief of staff was facilitating communication between the school board and the schools’ senior leadership, said Eric Hornberger, a Loudoun County School Board member. He cited Richards’ “interpersonal communication skills” and experience working with both affluent and at-risk youth as particular assets: “You’re getting the best of both worlds.”

After attending high school in Vienna Va., Richards went on to study philosophy and physics at William & Mary before earning an M.A. in American Studies at the University of Maryland College Park and an MFA in Creative Writing at the University of Notre Dame. He holds an Ed.D. from the University of Texas at San Antonio – and according to his LinkedIn profile, speaks Spanish and German, and belongs to the American Mensa Society.

Fitzgerald said Richards “blew it away in the interview,” and all six school board members “agreed pretty quickly” that he was their top pick of 37 candidates who applied for the position. They reached a decision on Feb. 12.

Richards will start on May 1, said Fitzgerald, to get him involved in the new high school planning and construction process as quickly as possible. He will earn an annual base salary of $176,000, with an initial contract that runs through June 30, 2022. Clapping was the evening’s theme at Tuesday’s school board meeting.

5-percent raise for all staff proposed

Attendees applauded the school board once again when Lintner presented the proposed budget for fiscal year 2020, which includes a 5-percent pay increase for all city schools staff.

“You deserve it, for one thing,” said Lintner. “It’s critical for us to attract great staff and maintain our competitive advantage in compensation.”

Overall, the proposed budget rose 4.6 percent from last year, to $83.6 million. Personnel needs account for 85 percent of the increase, including the addition of seven full-time positions for school counselors and computer science and dual language teachers. Linter said the system expects an increase in federal, state, and city funding, in part because of continually increasing enrollment numbers.

The next school board meeting will be a work session on the budget at 5:30 p.m. next Tuesday.

This article has been updated to correct the spelling of Loudoun County in the headline.