How one local restaurant decided to go green

Mr. J’s Bagels & Deli has gone green — and it has nothing to do with salads or even the upcoming St. Patrick’s Day celebrations.

With three locations in Harrisonburg, Mr. J’s has been dishing out breakfast in The Valley since 1990 but has been quietly undergoing an environmental makeover, which its owners hope will keep it relevant well into the 21stcentury.

The most noticeable switch is that it is no longer using Styrofoam cups. A less obvious — but healthier — change has come in the ingredients and baking of the establishment’s namesake bagels. 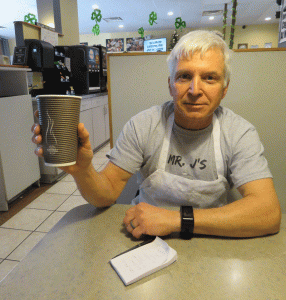 This all came about after Mr. J’s co-owner Joe Jerlinski saw the green light so to speak while convalescing after consecutive surgeries in January 2018.

During his six-week recovery, Jerlinski thought a lot about the future of the business he and his brother David own. Joe Jerlinski wondered what Mr. J’s needed to do “to keep going forward,” as he put it.

“People don’t realize it,” he said, “but to be an excellent entrepreneur you have to do a lot of thinking.”

Jerlinski  said he thought about how much grocery stores have expanded organic food sections in recent years. And comments and questions from a few of his customers also came to mind.

“Some of my customers were after me for a long time about how much Styrofoam the store uses,” he said. Because he had the time while recovering, Jerlinski began doing some online research. What he found surprising was how little the difference was between Styrofoam and paper products getting thrown away.

“When you add it all together,” he said, “there is not a lot of difference in the space taken up in landfills between Styrofoam and paper cups.” He also learned that producing paper products leaves a relatively large carbon footprint.

He decided to dig deeper and found a better idea than either paper or Styrofoam. Now all three stores use ribbed cups manufactured with 83 percent bamboo.

“It’s a readily available wood, and it makes sturdy, versatile cups,” Jerlinski said. He said the cup could hold both cold and hot liquids. Paper cups often require cardboard sleeves for customers to hold hot beverages. And many disposable coffee cups are made with a plastic coating that makes it difficult to recycle sending almost all of them to the world’s landfills, as the BBC reported last year.

Going green didn’t stop with the containers. Aware of customers’ interest in organic foods, Jerlinski explored the idea of using natural ingredients instead of processed food in his menu offerings, too.

His goal was to use food and ingredients that didn’t contain antibiotics or preservatives. For Mr. J’s, that included turkey, ham, and chicken. Jerlinski said processed food was too salty and had too many additives. His supplier carried those three types of meats without all the additives, which fits the foodie definition of “all natural.”

Jerlinski especially researched the kind of flour used to make bagels. He wanted to use ingredients that were both better and healthier. 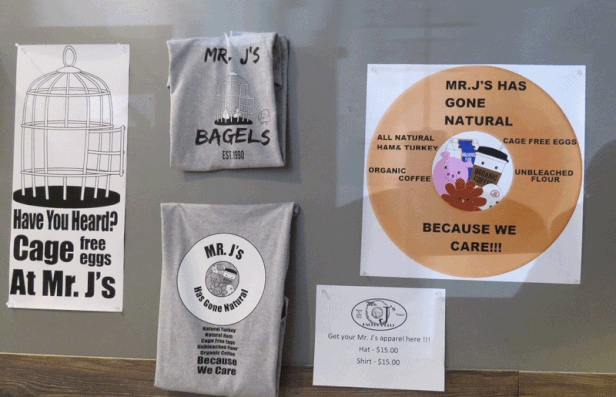 A sign in Mr. J’s shared the green news.

That motivation led him to begin using flour that didn’t contain bleach or was bromated. Jerlinski said bromated flour is banned in California, Canada, and Europe. Studies have shown that even after baking, bromate is considered a carcinogen. Bromate gives the flour strength, which bagels need.

The bleach added to flour is not the same as laundry bleach. However, it has the same effect. It whitens the flour. Mr. J’s now uses unbleached and unbromated flour.

Jerlinski said it took Mr. J’s eight months from idea to inception to quietly, but purposely, transition these changes into the baking and serving procedures. Training and educating employees was a big part of the process.

“Besides the training,” Jerlinski said, “we had product selection, pricing, sampling, t-shirts, and advertising to do.”

He said all of the changes were in place beginning last August at the three locations: the original shop on East Market Street as well as on South High Street, and North High Street, where all the bagels are made.

Using the bamboo-based cups and making their food better and healthier did cause prices to increase slightly. Joe said there were no complaints from customers, however. After the improvements were in place, he was surprised that he got so few comments.

“People just keep coming in,” he said. “That’s what we want.”

And so far, many customers have liked the changes.

Ben Schlabach of Harrisonburg is a Mr. J’s regular and said he felt better knowing that his sandwich is made with more natural products.

“I was excited to see them making changes,” Schlabach said, “especially the switch to more natural deli meats.”

Margaret Foth of Harrisonburg visits Mr. J’s twice a week for coffee with a couple of friends after Yoga class.

“The signage in the store made it pretty clear about what they were doing with their products,” Foth said. “Mr. J’s has always been concerned about the quality of the products they serve.”

Foth also said Jerlinski even takes time to sit and visit with them.

“He likes to learn about his clients,” she said. That’s one of the many reasons that reinforced Jerlinksi’s decision to implement the changes.

Many of Mr. J’s regular customers already seem to be in step with being environmentally friendly. Shirley Hochstetler of Linville said she meets with friends there every two weeks.

“We all bring our own coffee mugs,” Hochstetler said. Foth and Schlabach said the same.

Jerlinski sees all of this change as just another way of giving back to the community.

“Mr. J’s is just not a place to eat,” he said. “We give bagels to all different kinds of organizations for fundraisers.”

And Jerlinski said  his brother and business partner David readily agreed with his suggestions, which he says is paying off.

“Business is steady and growing,” Joe Jerlinski said. “That’s what is important.”