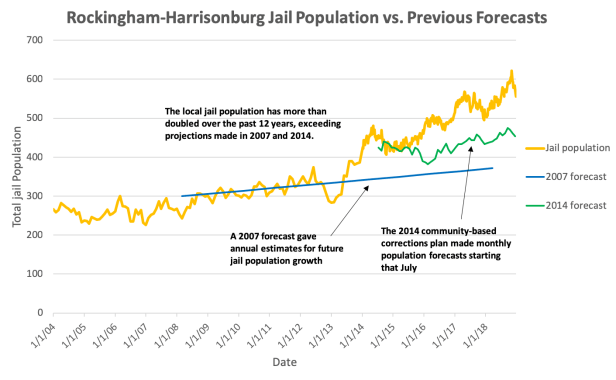 Editor’s note: This is the second part in an occasional series about the rising local jail population.

In a 2014 study commissioned by Rockingham County and the City of Harrisonburg, Moseley Architects forecast that the local jail population would reach 600 by the year 2025 and 675 by 2029 “if current policies, procedures and administrative practices remain unchanged….”

Facing the prospect of a 33-percent increase in just 10 years from the roughly 450 people in jail at that time, the two localities briefly considered building a new jail in Harrisonburg and then settled on buying into the Middle River Regional Jail in Verona.

In the five years since, the number of people sent to jail has outpaced that recent forecast. The local jail population peaked well over 600 last year, seven years earlier than predicted in the 2014 community-based corrections plan.

That plan also recommended strategies to manage and mitigate local jail population growth. Some of them – like creating a drug court and improving mental health services at the jail – have since moved forward in some way. Others, like the hiring of a community justice planner, are still being considered.

Nevertheless, the local jail population has grown much faster than expected – a trend that defies simple explanations or obvious solutions. Last fall, the combined local jail population in Harrisonburg and the Middle River Regional Jail surpassed 600 people, and more than 25 percent higher than the population of about 470 forecast for the fall of 2018.

According to Commonwealth’s Attorney Marsha Garst, whose prosecution decisions have an enormous impact on the size of the jail population, drugs are the main culprit.

“[We have] an untreated drug crisis in this community,” Garst said. “We have gotta do something in every socioeconomic class about drug abuse.”

Garst pointed to the drug court, which now has about two dozen participants, as one new alternative to jail for people with addictions. But she said a lack of resources remains a challenge.

“We begged the money from the city and the county, and thank God we’ve gotten federal grants to grow [the drug court],” she said.

Another crucial need, she said, are better transitional housing options for people getting out of jail who “don’t have a good, healthy place to go.”

Sheriff Bryan Hutcheson echoed that idea, noting that the overwhelming majority of people under his supervision in the jail have been locked up before. According to data from late November that he compiled prior to a community criminal justice board meeting, 91 percent of the 576 people incarcerated that day, either at the jail downtown or at Middle River Regional Jail, had been in jail before. That same day, 185 of the inmates – 32 percent – were being held on probation violations — a figure that Hutcheson said is typical.

“They’re getting out and then they’re coming back,” Hutcheson said. “So is the problem in this building or is it in the streets? It’s bigger than the system. I think it’s society. And it’s all of us. It’s not one thing – it’s not jobs, it’s not housing, it’s not drugs. It’s all of it.”

The need for stronger support networks to prevent recidivism is clear, said Josh Lutz, chief probation and parole officer for Harrisonburg and Rockingham County, in an email to The Citizen.

“This support can come in the form of housing, and assistance in meeting a person’s basic needs,” he said. “Once these needs are being met, then we can focus on the other issues (e.g., substance abuse treatment, forming positive prosocial bonds, employment, etc.). Without all this happening, we will continue to find ourselves in the same situations.”

That, Cook said, has had an “if-you-build-it-they-will-come” effect of the system. With more judges hearing criminal cases more often in court, he said more people end up in jail for low-level crimes that otherwise would go un-prosecuted.

“We’re not talking about murders or assaults or shootings. That gets taken care of,” Cook said. “We’re talking about all the little crap that goes on every day that is criminalized under the code that doesn’t get addressed [when the system is smaller].”

What everyone interviewed for this article agrees on is that the trend is heading in the wrong direction. But without a consensus on precisely why, solutions are that much tougher to find.

“We can. It’s just about figuring it out. Maybe I’m wrong? Maybe it’s not about drugs. I’d love to know what it’s about. If I’m wrong, tell me. I want it to be better. If there’s something we can do better here I hope somebody tells me.”