Keys to stemming rising jail population could be in the numbers. The question now is how to find them.

While the local jail population continues to grow, the record-keeping systems used by law enforcement, the courts and other pieces of the local criminal justice system remain stuck in the past, complicating efforts to understand what’s driving that population growth or to begin addressing it.

“I’ll even say, [it’s] frustrating,” said Harrisonburg Councilman Richard Baugh. “Part of what can drive you nuts about this [is the] Balkanization of the records. The entire system is Balkanized.”

Within a year, however, new insight into local criminal justice trends could be coming from two different sources: a new $3 million Computer Aided Dispatch (CAD) system, and, perhaps, a community justice planner hired by the city and county to analyze criminal justice data and advise local government on the issue.

But while the CAD system has already been paid for by the city, county and James Madison University, it’s not clear exactly how useful it will be to efforts to check the growing jail population. At the same time, the city and county are considering hiring a community justice planner, but that won’t be decided until this summer, when both entities adopt final budgets for the next fiscal year. 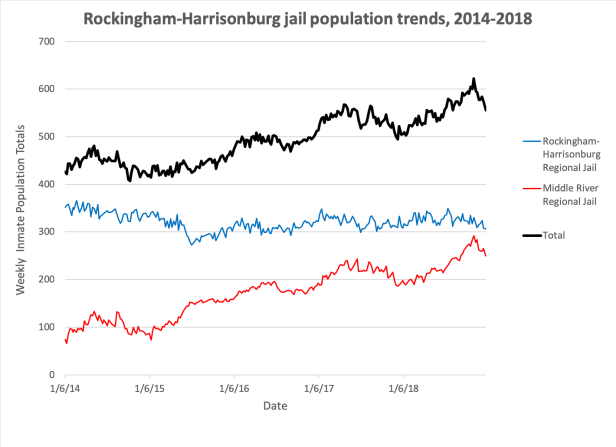 In 2015, when the average daily jail population was between 400 and 450, the city and county joined the Middle River Regional Jail (MMRJ) Authority, buying into the ownership of its jail in Verona to relieve overcrowding. Since the end of 2016, the total inmate population at both facilities has consistently been above 500 and rose steadily to over 600 in 2018, even as the city and county invested in alternative programs such as the drug court and improved mental health services at the jail.

As the number of local inmates at the MMRJ has grown – along with totals from some other member localities – the authority recently took began the process of expanding the jail in Verona, which itself is now full.

The city and county are each paying roughly 37.5% of its roughly $3 million cost — a figure that includes software, hardware and other components — with JMU picking up the remaining 25%. Developed by Texas-based Tyler Technologies, it is primarily designed to improve public safety in Harrisonburg and Rockingham County by facilitating communication and records management among nearly 20 agencies, including city police, the sheriff’s office, smaller police forces in the county’s various towns, rescue squads and fire departments.

A side benefit for criminal justice reform however, is the sheer amount of data it will capture and its vastly improved ability to connect dots and churn out useful information about the criminal justice system and those in contact with it.

“We have a couple hopes for the system,” said Daniel Barrows, chair of the Valley Justice Coalition, a group that works to reduce incarceration in the city and county. “In general, the more transparency and the more information we have to work with, the better we can be making decisions.”

As a hypothetical example, Barrows said the current data management systems can show that a growing number of older inmates are in jail and what kinds of crimes law enforcement is charging inmates with. But there’s no efficient way of knowing what specific charges that growing cohort of older inmates most commonly face — a key to figuring out potential solutions.

“I don’t know the answer, because I can’t run an analysis based on age,” Barrows said. “[The new system] opens the door to all kinds of analyses.”

King, the county administrator, said it’s “a fair perception” that the new system will help provide a more nuanced look at local criminal justice system. But he added it’s hard to say how useful it will be in reducing local incarceration — or even slowing its growth rate.

“I don’t think it’s a silver bullet,” he said. “There is an expectation that it’s going to do a lot more than what a Computer Aided Dispatch system does. It isn’t a database that’s primarily focused on social justice reform.”

The system will be hosted in the local Emergency Communications Center.

Jim Junkins, the center’s director, said the new system is projected to  “go live” in December or January.

As development of the new CAD system continues, the city and county are also considering creating a new position for a community justice planner, to advise policy makers on criminal justice decisions. Several community groups have pushed for the creation of such a position.

King told The Citizen that the budget proposal he’s preparing for the county board of supervisors now includes $50,000 for a new position, although he emphasized that it’s “very, very early” in the budgeting process and key details about this potential position have yet to be decided.

Among the uncertainties, King said, are basic details about the job description and qualifications as well as whether this employee would work just for the city and county, or for a larger group of localities in the region.

“We don’t know if it would be a full-blown community justice planner, or if we need someone strong on the data and technology side, if it’s more of an analyst starting off,” King said.

On the city side, Campbell said hiring a community justice planner is “on the table” as he prepares his budget proposal but added that it’s too early to say whether the job would make it into his final proposal to the city council or whether it would win council’s approval. Nonetheless, Campbell said, it’s one of the issues he most frequently hears about from members of the public.

Baugh, from the city council, said he optimistic  something will happen in response to community calls for the creation of a community justice planner position.

“I can’t promise anybody that there’s actually going to be a person called a ‘community criminal justice planner.’ … I am [more certain] that the will is there to address the substance of what that’s trying to address,” he said. “What’s important to me is that the substance of what people are thinking about when they say ‘hire a community justice planner’ gets addressed.

“What I’m cautiously optimistic about is that on top of everything else, this is not just the city pushing this and kind of dragging the county along,” Baugh added. “The county’s saying, ‘yeah.’ They’re agreeing with us on this. Hopefully we kind of are all rowing the boat in the same direction.”