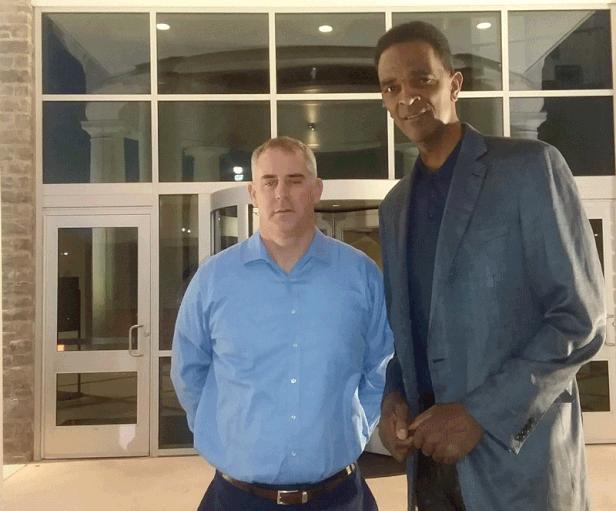 Maj. Clayton Justice of the Rockingham County Sheriff’s office and Ralph Sampson stop for a photo Tuesday after urging the Harrisonburg City School Board to name the high school’s gym after longtime educator and coach Roger Bergey. (Photo by Randi B. Hagi)

Harrisonburg High School’s gym will soon sport the name of Roger Bergey – the basketball coach, teacher, and athletic director who served the high school in various roles from 1972 to 2002.

Nine of Bergey’s former colleagues, students and players spoke at the Harrisonburg City School Board meeting Tuesday night in support of naming the gym after him. And the board voted unanimously to do so and will soon announce the date and time for an official naming ceremony.

One of his supporters literally towered over the rest – Ralph Sampson, who, after graduating from Harrisonburg High School in 1979, went on to play for the University of Virginia and the Houston Rockets.

Bergey was “not just a coach, not just a husband, a teacher, a father — but a mentor to thousands of kids,” Sampson said.

Bergey, who wasn’t present at the meeting, was inducted into the Virginia High School Hall of Fame in 2008 and enshrined in the Harrisonburg High School Hall of Fame the following year. In his career as a basketball coach, he amassed 428 wins, six regional championships and two state championships, which board chair Deb Fitzgerald listed as being among the accomplishments during Bergey’s tenure.

But those advocating for renaming the gym talked mostly about Bergey’s character and integrity, and how it has influenced their lives.

Don Burgess, Harrisonburg High’s boys basketball coach who was one of the many players Bergey coached, recalled Bergey telling him and his teammates in high school, “Men, I don’t know how many wins and losses we will have, but I know that we will do things right in the community and the schoolhouse.”

“You were just a better person for being with him,” said Eddie Mozingo, who coached alongside Bergey for 11 years.

“He really believed in us, when we probably didn’t believe in ourselves sometimes,” said Maj. Clayton Justice of the Rockingham County Sheriff’s Office. “He is a guy that I love dearly … I want to model his discipline, his structure, his foot stomps!”