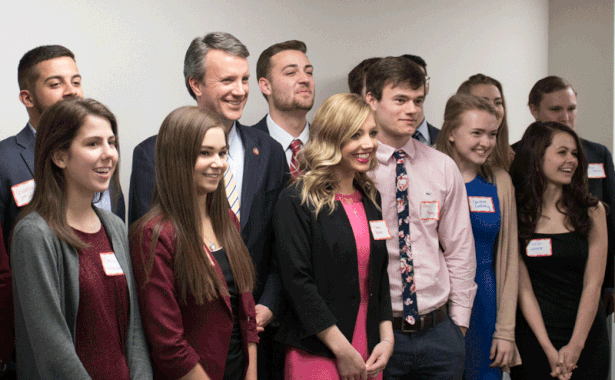 Republican U.S. Rep. Ben Cline, fourth from the left, poses for a photo with members of the JMU College Republicans at the group’s March 22 spring banquet.

While U.S. Rep. Ben Cline said it’s “depressing being in the minority,” he told his fellow Harrisonburg-area Republicans on Friday evening that he’s been proud to support President Donald Trump’s efforts to build a border wall and to oppose “one bad bill after another.”

He also later told The Citizen he’s hoping the special counsel’s report, released to the attorney general on Friday, will become public soon, which could effect the work of the House Judiciary Committee of which Cline is a member.

But much of Cline’s 13-minute remarks at the 5th annual JMU College Republicans’ Spring Banquet  focused on his frustration with House Speaker Nancy Pelosi and House Democrats for their approaches — including the resolution to block the president’s declaration of a national emergency in order to spend billions of dollars to build a wall along the U.S.-Mexico border.

Trump issued the first veto of his presidency to reject that resolution, and the House would need two-thirds of its members to override that veto — far more than the 245 who voted for the original resolution.

“His veto will stand. When Nancy Pelosi tries to override it this week, she will fail,” he said, prompting applause from the more than 80 people at JMU’s Madison Union. “Their effort to block our president is having little effect, fortunately.”

Cline was among 182 House Republicans who voted against the resolution. But 13 other Republicans voted for it, including the eight members of the House Liberty Caucus led by Republican U.S. Rep. Justin Amash of Michigan. Amash cosponored the resolution because he said Trump’s move violated the U.S. Constitution by encroaching on Congress’ power to appropriate funds laid out in Article I.

Cline told The Citizen after the speech that he believes the president had the justification for the national emergency.

But he said he’s uncomfortable with the precedent it could set and would entertain reforms to the national emergency law.

“I would welcome a discussion about reeling in some of the power that Congress has delegated to the executive branch, the various agencies to spend money — or to reallocate money. But because the statute that he is using is current law, that’s a conversation that we need to have moving forward,” he said. “I would love to more clearly define what an emergency is in this specific statute but also seek to reel in some of that authority that’s granted once an emergency is declared.”

In his speech, he told the Republican crowd that the number of immigrants who are being held at the U.S.-Mexico border constitutes an emergency.

“That’s a crisis — it’s a humanitarian crisis,” he said. “And when one-third of women traveling in caravans are facing sexual assault, that’s a crisis.”

Trump said “one in three women is sexually assaulted on the dangerous journey north” when making his case for the border wall funding in January — a figure that Politifact rated as “half-true.” (The fact-checking site said the figure comes from a 2017 Doctors Without Borders report and lacked context. The Doctors Without Borders report quoted a 2015 survey of 400 migrants, of whom 31.4 percent of women said they were sexually abused during their travels through Mexico, but the sample size was small because the majority of respondents were men.)

Also echoing some of Trump’s reasons for the emergency declaration, Cline said drugs smuggled over the border is another factor.

The JMU College Republicans, who hosted Friday’s event,  had debated the merits of the national emergency, said Alex Rodriguez, the group’s newly-elected chairman. He said when they began informally discussing it at a recent meeting, no consensus really emerged but the discussion mirrored that among the U.S. House Republican caucus. 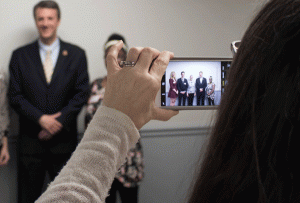 believe in the national emergency. And other people did,” Rodriguez said. “But we did all acknowledge that there was a crisis at the border.”

Rodriguez, who said his grandparents immigrated from Mexico, said he believes it’s essential for anyone coming into the country to follow legal procedures but understands why many are fleeing terrible conditions in their home countries.

“I’m not against immigration at all. You should be able to find some kind of reforms,” he said. “I do see the need for it. But you have an obstructionist (U.S. House) who’s trying to obstruct anything President Trump is trying to do.”

Cline’s take on the Mueller report

Just before the dinner began Friday, news broke that Special Counsel Robert Mueller had delivered to the U.S. attorney general the final report about the two-year long investigation into Russian interference in the 2016 Election.

Cline was one of the 420 members of the U.S. House who voted to urge the attorney general to release the report to Congress and the public. He told The Citizen he expects to read it soon.

“I hope to. I hope they will move expeditiously to review it and then make it public in its entirety,” he said. “I have no expectation of what it’s going to say, I simply am looking forward to pursing the facts wherever they lead. But as a former prosecutor, I know to wait for the facts.”

As a new member on the House Judiciary Committee, Cline also said he’s concerned the panel’s Democratic chairman, Rep. Jerrold Nadler of New York, has been too aggressive so far with formal requests for documents from Trump associates.

He said the more than 80 requests might be overkill at this point, “and it’s appropriate to wait to see what the Mueller report says.”

Opposing ‘an agenda of the radical left’

Cline opened his remarks by saying how “wonderful it is to be back in the Shenandoah Valley from the swamp.”

He said his first 11 weeks representing the 6th District, which stretches from Strasburg south to Roanoke, has prompted him to vote and speak against “one bad bill after another.”

“This agenda of Nancy Pelosi’s and my colleagues in the freshman class — this Green New Deal. This is not America’s agenda,” he said. “This is an agenda of the radical left, and the socialism that is being bandied about no longer on college campuses like JMU – but now in the halls of Congress, is the wrong solution for America. It is the solution that has been wrong for every country for which it’s ever been tried.”

Environmental activists, only days earlier, were in Harrisonburg to urge residents to reach out to find common ground across the political spectrum on certain initiatives included in the Green New Deal, such as saving energy costs and spurring job growth.

Cline also criticized the sweeping campaign finance and elections measure that passed the House — but is unlikely to see a vote in the Senate— that, among other things, would match political contributions with taxpayer dollars.

It’s an example of socialism, Cline said. And twice during his speech he referenced Venezuela as a cautionary tale of socialism gone horribly wrong. The leader of that government, Nicolas Maduro, clings to power even after opposition leader Juan Guaido assumed the presidency through a constitutional provision.

Last week, representatives of the Valley Antiwar Coalition protested outside of Cline’s Harrisonburg district office to call on Cline and Congress to reject any U.S. military action or economic sanctions against Venezuela or in support of regime change.

“We have a democracy problem and a humanitarian crisis right here in the United States and we want our government to focus on solving the many problem in our own country,” the group said in a statement.

Cline told The Citizen he was told of the protest but that the United States should “help the newly-elected administration of Venezuela however we can.”

“I share the concern of many on both sides of the aisle that Maduro is a disaster for Venezuela and needs to go,” he said. “The newly-elected president needs to be sworn in. And when tyrants stand to thwart the will of voters, the United states has historically stood with the people and supported efforts to ensure that their will is followed.”

‘Valley sunshine’ to the Capitol

Friday’s speech at JMU was the latest example of the freshman legislator trying to remain visible across the district in his first 11 weeks in office. He has held town hall meetings — even starting before he was sworn in Jan. 3 — and has more planned for later in the spring and the summer.

He told the crowd that while he prefers being the in Valley, he’s also tried to bring some “Valley sunshine” to the job in D.C.

For instance, he said he’s introduced himself to many Democrats, even if they don’t always agree on policy.

“I’ll go over to the Democratic side of the aisle, and I’ll try to bring some Valley sunshine to an otherwise dark chamber,” he said. “So every once in a while, I’ll meet somebody (and) I’ll strike up a conversation. And I can honestly say there are people on both sides who are trying to make this country a better place and improve the lives of working men and women — I’m just finding more friends on our side of the aisle.”