Harrisonburg police officers on Wednesday plan to mingle with residents in the neighborhood surrounding the Salvation Army Emergency Shelter on Jefferson Street off of North Main Street in what will be the police department’s first “community walk” event of 2019.

Community walks, in which officers go door-to-door introducing themselves, are a key part of Police Chief Eric English’s community policing efforts. After holding one community walk last fall, English plans to continue them throughout 2019.

But some organizations in the area approached the community walk idea cautiously.

“A lot of people have expressed gratitude that HPD wants to build relationships, while also acknowledging that for some persons it’s incredibly intimidating to have law enforcement in their neighborhood, much less at their door, depending on their experience with law enforcement in their country of origin or in the United States,” she said. “So long-term relationship building and how to go about doing that is part of what the question is in the community. What works in our particular community? What works in Harrisonburg?”

For English, community walks are part of his goal to form better relationships between the department and the community his officers serve.

“We need to find a way to get out more in the public, to get out of our cars and get on foot and engaging more,” English said. “I had an officer who got out in the Northeast neighborhood and just sat on the porch to sit down and talk with a family for a while. And they sent me a letter saying, ‘This is great. It’s been a long time since I’ve seen officers getting out and sitting on a porch to talk to a family.’ It’s stuff like that where you aren’t out there for a particular call, you’re just out there to have a conversation with your citizens so they get to know you.” 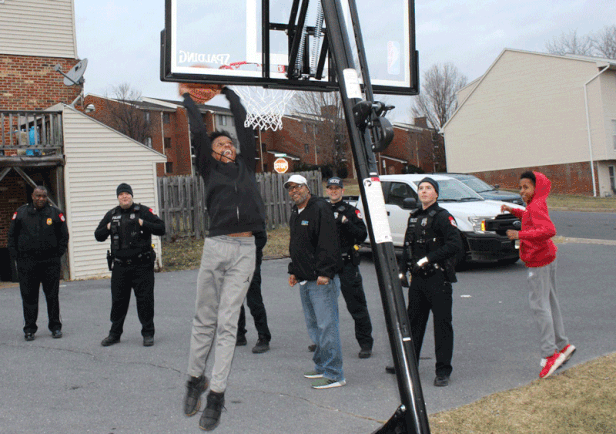 Officers Driver and Johnson took donations from fellow employees to purchase new equipment for a neighborhood basketball goal that was beyond repair. Photo courtesy of Harrisonburg Police Department.

When he was hired last year as the new police chief,  English made clear his goal to form better relationships between his officers and the communities they serve.

“When I was applying for this job, one of the things I said I wanted to do was engage our citizens and what better way to do that than to knock on an individual’s door and introduce ourselves,” English said. “So that’s what we’re trying to do.”

English, who served for 29 years with the Richmond Police Department before coming to Harrisonburg, got the idea for community walks from his time with that department.

“When I got to Harrisonburg I didn’t try to re-invent the wheel. I just took some ideas that we used at my past agency,” he said. “In Richmond, one of the reasons that we used these types of community walks was to try and engage citizens more, but also to try and figure out what’s going on in these neighborhoods so we can better serve those particular areas.”

The Richmond Police Department has credited the walks with creating better relationships between law enforcement and the people they serve, and other former Richmond officers have taken the idea to other cities in the state.

Soon after English took the reins, the department held its first community walk on Nov. 20 in the neighborhood west of Chicago Avenue and south of Waterman Elementary School. A press release that preceded the first community walk stated: “HPD encourages community members to not only walk with us, but also to engage our officers who work in their district by asking questions, sharing information and learning about resources available to them.”

“It went extremely well,” English said of the November event. “Many citizens were surprised, but once we explained to them what was going on they thanked us and said, ‘We’re glad you’re out here.’ If citizens feel like you really care about what’s going on in their neighborhood it gives us more opportunities to work together.”

English said the department will announce the walks in advance on social media and through press releases, as well as having the officers who serve a particular neighborhood inform residents that the event will take place. HPD will choose neighborhoods where community walks will occur based on suggestions from patrol officers, and English said people throughout the city have already requested for a walk to be held in their communities.

A petition and concerns

Not everyone in Harrisonburg shares English’s positive view of the community walks. In January, following English’s announcement that the department would continue the community walks in 2019, a Change.org petition was started entitled “Take a stand on police-community relations in the ‘Friendly City.'”

“Due to a nationally-shared distrust of police, many of us have reacted to this [the announcement of community walks] with fear. A fear born of policing gone wrong. That fear can stem from racial profiling, subsequent police brutality, raids directed to migrants, or just a general cultural shift against policing. This fear will undoubtedly lead to negative actions or reactions, which will not positively impact community-police relations,” the petition said.

In February English arranged a meeting with the petition organizers.

“The meeting went well. They had some very good ideas and I certainly understand their position,” English said. “We came to an understanding. We’re both trying to accomplish the same things. Our views on how to get there are just different.”

The petition suggested that instead of community walks, the department should hold meet-and-greet events at community centers in the neighborhoods where the walks would take place.

“This would give community members time to organize their thoughts and go to share them voluntarily, as opposed to being stunned into silence at the police presence at their door,” the petition stated.

The petition organizers did not respond to requests for comment about English’s decision to go ahead with the planned community walks.

Representatives from other organizations say while the walks aren’t necessarily a bad approach, they will reserve judgment until a few more have taken place.

“Chief English stated that his hope was to use this as one of the ways to make another connection with people in the community, and I always think that that’s good,” said Monica Robinson, president of the Harrisonburg-Rockingham County Chapter of the NAACP. “My only concern with it is that the walks seem to be targeted at neighborhoods that are high-crime areas, and I don’t want the police to show up only in areas where there is high crime. By being in the community, they can meet more people, but I just feel like people may feel this is another way to target their area.”

But English said the relationships that can be built through activities like community walks will be essential for when police are called to a neighborhood for whatever reason.

“We’re trying to meet people where they are and not just show up when there is a crisis,” he said. “We want to meet them before a crisis occurs so that we get to know them a little better.”