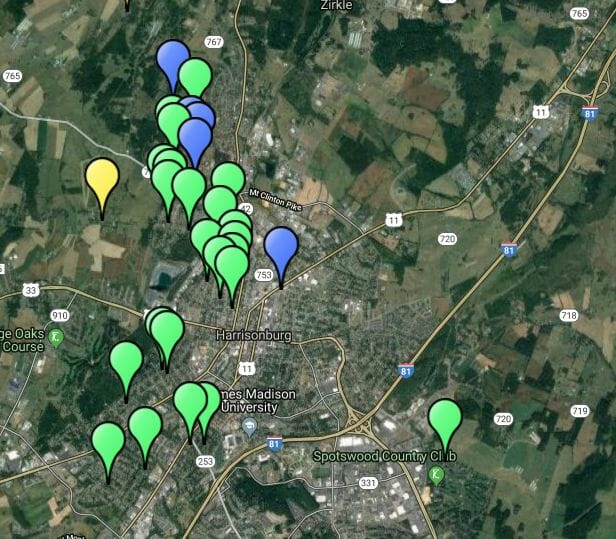 With solar energy growing quickly in the city (and soon to take another leap, if the school board has its way), an effort is underway to document and map every installation in the city. The 2019 Harrisonburg Solar Census launched on March 30 and will make the information it gathers accessible to the public.

“As we rapidly reach HEC’s original proposed 1 percent cap on solar…it feels [like] a good chance to ask what that 1 percent looks like,” said Everett Brubaker, the census coordinator, in an email. “Visualizing the growth and presence of solar in Harrisonburg helps the community see that this is not some niche project of the wealthy, but a dramatically increasing transformation across our city.”

Brubaker, a graduate student at James Madison University, is using some hours of an internship with Renew Rocktown to work on the census, including flyers, a website, and a launch pegged to Earth Day. Brubaker and others working on the project hope to have as complete of a census as possible by April 20, with an eye toward compiling and releasing the data by April 22.

“The overarching goal is to ‘tell the story of solar in Harrisonburg,’” said Brubaker. “I have heard that Harrisonburg is one of the leaders in the state on solar generation per capita. Do we know our own story?”

The census form on the website includes questions about array size and location, date of installation, and the motivation for installing solar panels. After entries are submitted, they show up on an interactive map, where you can see all locations of respondents.

Brubaker said, “These questions help city decision makers, solar advocates, and residents answer questions like ‘What neighborhoods are going solar?’ and ‘Why are Harrisonburg residents and businesses going solar?’ This project also provides a benchmark of data that can be revisited in 3, 5, 10 years. How has Harrisonburg’s energy portfolio changed?”

The Census is a collaboration of several groups, including Renew Rocktown, Climate Action Alliance of the Valley (CAAV), and the Shenandoah Group of the Sierra Club.

As of Wednesday, the solar census had documented about 330 kW of solar capacity in Harrisonburg – more than half of it on the campus of Eastern Mennonite University – with “lots more to go,” Brubaker said.

At its February board meeting, the Harrisonburg Electric Commission (HEC) voted to raise its net-metered solar cap from 1 percent of peak load to 2 percent. According to General Manager Brian O’Dell, the change gives HEC more time to reevaluate its rate structure without interfering with any potential solar installations.

“What we’re looking to do is study the impact of the net metering and determine what, if any, changes we want to make to our net metering policies,” said O’Dell.

Concerns that growing solar capacity in the city could harm HEC’s ability to maintain its infrastructure were behind its previous policy capping net-metering at 1 percent of total peak load, adopted in 2010. That’s because HEC’s revenue for maintenance is built into its electric rates, meaning customers with solar panels who reduce consumption of electricity from HEC pay less toward the maintenance of the city’s electric grid.

O’Dell said the city now has 135 net-metered customers, with a combined total capacity of 1265 kW. That translates to 0.87 percent of HEC’s peak load. By raising its net-metering cap to 2 percent, O’Dell said, HEC can complete a review of net-metering policy without limiting future installations to the old 1 percent cap.

The 4MW solar project proposed for the city schools will not count toward the new 2 percent net-metering cap, O’Dell said. Discussions about that project are continuing between the school board, the city and HEC.

O’Dell anticipates completing the review of the net-metering policy by the end of the year. For the time being, anyone wishing to install solar will be grandfathered in under the terms of the existing agreement. He added that the existing level of solar capacity in the city will not affect HEC rates in the near future.

“The current percentage of net meter capacity installed is not going to influence our rates for this coming year,” O’Dell said.