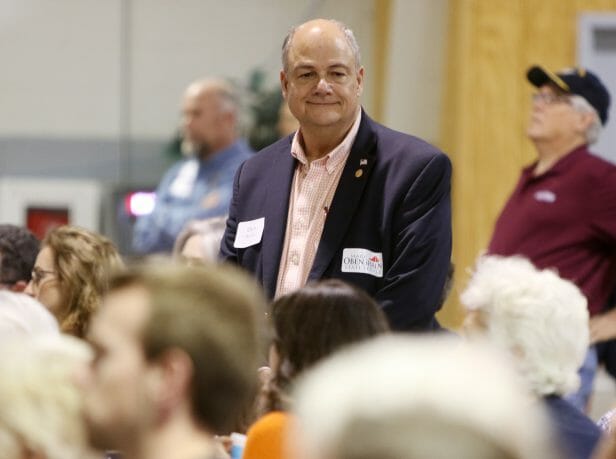 Chris Runion, pictured here at the Oysters with Obenshain fundraiser on April 11, is the Republican nominee in the 25th House of Delegates district after Saturday’s firehouse primary. Photo by Holly Marcus.

Each of the three candidates for the Republican nomination to represent the 25th House of Delegates enjoyed a home-field advantage in Saturday’s firehouse primary, and the candidate with the biggest home field emerged the overall winner.

Chris Runion, a businessman from Bridgewater, won with 1,299 total votes across the district — roughly 42 percent of 3,084 total votes cast.

And propelling him to victory was his fellow residents of Rockingham County, where he earned 769 of the 1,245 votes cast. Rockingham had the highest voter turnout of the three voting locations – one in each area the district covers: southern Rockingham, northern Augusta County and western Albemarle County.

“I’m truly honored and humbled that the voters of the district chose me,” Runion said Sunday. “It was just really uplifting. My wife and I truly appreciate the confidence those folks showed in us.”

Marshall Pattie, an Augusta County Supervisor for the past eight years, won that county’s vote on his way to a second-place finish with total 1,041 votes. And though Richard Fox, a farmer from near Charlottesville, won the vote in Albemarle County, it had by far the smallest turnout. Fox finished third with 744 total votes.

“We’re going to work hard to reach out and understand those folks that supported someone else. .. and bring them into our camp, and work hard so that we have a Republican elected this fall,” Runion said.

Despite frustration with tactics, public pledges of unity

As votes were being counted at the Augusta County Government Center on Saturday afternoon, Fox told The Citizen he was disappointed with the negative tone that he said characterized the end of the campaign

“I find it disheartening that you can’t campaign on your own merits,” he said. “You have to campaign against other people.”

“Maybe I was naïve,” Fox continued. “I thought because we only had [a few weeks], we could focus on the issues.” 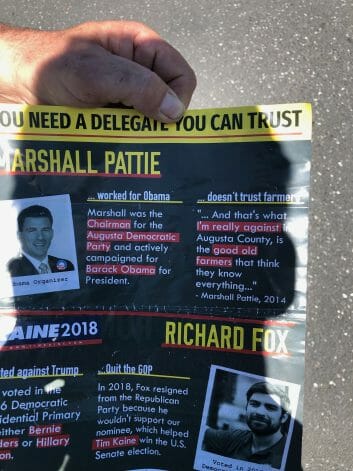 Contrast piece vs. hit piece – all in the eye of the beholder.

Fox said a handout distributed by Runion’s campaign on Saturday was an example of negative campaign tactics that can turn many off from the political process. The handout, Fox said, contained “blatant lies” about him not supporting President Donald Trump in the 2016 election.

Runion characterized the handout – which also criticized Pattie’s past involvement with the Democratic Party in Augusta County – as a “contrast piece” that was factual.

“I felt like I ran a truthful, honest and positive campaign,” Runion told The Citizen on Sunday. “I stand behind all the comments we made.”

During the last week of the campaign, Pattie criticized Runion’s campaign in a Facebook post that said, “Very disappointing to see my opponent attack me NOT for my record but for my past.”

In his campaign, Pattie repeatedly said his voting record as a county supervisor, after he left the Democratic Party, demonstrated his commitment to conservative ideals. In that same Facebook post, Pattie published a campaign ad calling Runion a political opportunist and hypocrite.

After the results of Saturday’s primary were announced, however, both Fox and Pattie said they would support Runion in the general election.

“Holding control of the General Assembly is too important,” Fox said. “We need to make sure we unite behind the nominee.”

In a Facebook statement posted Saturday evening, Pattie congratulated Runion and pledged to support him in the general election. Pattie declined further comment on the race.

Runion thanked the two for running a “good and spirited campaign” and said he looks forward “to being able to work for them in Richmond.”

As the Republican nominee to replace the retiring Del. Steve Landes (R-Verona), Runion said he will remain focused “on the values that are important to the voters in the district.” During the primary, Runion emphasized his embrace of “Valley values” that include “the freedom to live our lives, raise our families and worship our God.”

“I’m a conservative Republican because I think it gives people the best opportunities to achieve the things that are important to them,” he said. 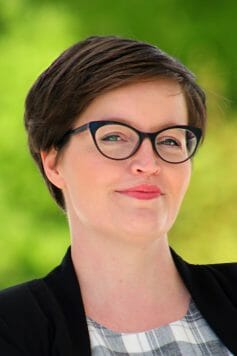 Runion’s Democratic opponent in the general election is Jennifer Kitchen from Augusta County.

“I’m trying to get out and meet as many voters in the 25th as I can,” she told The Citizen “[I want] to make sure that I can represent the people in the district and not necessarily a specific agenda of my own or my party.”

Kitchen said the main concerns emerging from those conversations include health care, infrastructure and education.

“Rural communities have been left behind,” she said.

Kitchen said she is continuing to explore the nuances of those issues and is still developing specific policy ideas she would pursue in the General Assembly.