A farmer, a businessman and a county supervisor walk into a debate hall… 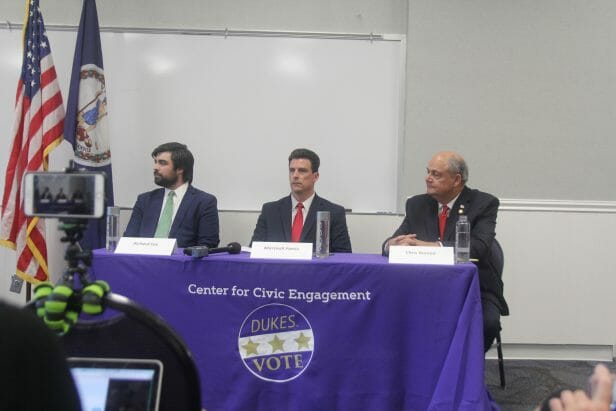 From left: Richard Fox, Marshall Pattie and Chris Runion, three candidates for the Republican nomination in the 25th House of Delegates district.

The three candidates for the Republican nomination to represent the 25th House of Delegates district (more about them here and here) are in firm agreement on their positions on abortion and the right to bear arms, and they’re proud of their longstanding ties to the district.

None like Medicaid expansion or bureaucrats too closely regulating agriculture and education. All support strict enforcement of immigration laws. And at their Tuesday night debate at James Madison University, each pledged to support whomever ends up winning the firehouse primary on April 27.

Indeed, Marshall Pattie, Chris Runion and Richard Fox differ more in who they are rather than what they say.

Pattie, a professor of management at JMU, pointed frequently to his conservative voting record over the past eight years as an Augusta County supervisor.

Runion, the owner Eddie Edwards Signs in Harrisonburg, returned repeatedly to the lessons he’s learned over four decades as a local businessman.

And Fox, the youngest of the candidates, emphasized his experiences as an Albemarle County farmer who’s fought county government and who’s also an Airbnb host as comfortable navigating the sharing economy as traditional commerce.

“It’s interesting to see how the candidates’ backgrounds play out,” said Michael Terrones, a first-year JMU student and member of the College Republicans who attended the event. “I think it’s going to come down to qualifications.”

“I’m glad that it stayed civil,” said Caitlin Lederer, another first-year student in the audience, who appreciated the fact that education policy came up several times during the debate.

It was a question about the General Assembly’s role in reigning in the cost of higher education that garnered some of the evening’s most varied responses. Fox proposed locking students’ tuition at the rate they pay as first-year students. Runion called for greater transparency and public involvement in public universities’ decision-making about tuition rates. And Pattie advocated for more choice and opportunity for high school seniors to take community college classes.

“Our biggest concern coming into [the debate] was how we could differentiate the candidates,” said Chris Gothard, a senior political science major who was one of three debate moderators.

In addition to education, a question about the candidates’ position on the just-approved bill to fund I-81 improvements with new fuel taxes and truck fees also resulted in slightly different answers. Still, none spoke in strong support the new taxes or fees, nor did any endorse tolling – the other primary option considered earlier this year by state lawmakers.

Instead, Pattie and Fox said working to obtain more federal funding for the interstate was a preferred alternative. And Runion said he wasn’t sure what the best alternative would be, while acknowledging the need that something be done.

Other questions posed to the three candidates — who rarely rebutted the others’ statements and never directly attacked one another — involved the state legislature’s role in supporting agriculture and in boosting Virginia’s economy.

If Tuesday’s debate is any guide, the decision facing Republicans in the 25th House District later this month won’t hinge as much on policy goals or underlying ideologies as personality, personal connections and biography:

The farm-reared businessman who remains a farmer at heart and a proud proponent of traditional Valley Values? The still-farming farmer with roots in Albemarle County stretching back to the Colonial era and a present there deeply invested in the sharing economy? Or the college professor running on a record in local government to burnish his conservative credentials?

And, of course, in a firehouse primary, it also will come down to whose supporters are most motivated to trek to the three polling locations on a spring Saturday. The voting will take place April 27 from 10 a.m. to 4 p.m. at the Crozet Library in Albemarle County, the Augusta County Government Center and for Rockingham County voters in the 25th District, the Bridgewater Town Office.