City spending on local criminal justice has increased steadily. In 2015, faced with the need for more jail space, the city and Rockingham County joined the Middle River Regional Jail Authority.

Harrisonburg’s total cost to prosecute, try and incarcerate people has risen by $1.8 million – roughly 29 percent – over the past five years, according to city finance documents.

The proposed budget for Fiscal Year 2020 allocates $7.9 million for local criminal justice spending that includes Harrisonburg’s share of operational costs at the Middle River Regional Jail and continuing “buy-in” payments the city agreed to when it joined the regional jail authority in 2015. That sum also covers funding for the downtown jail, courts and the Commonwealth’s Attorney’s office

In Fiscal Year 2016 — the city’s first year as a member of the regional jail authority — spending on those functions totaled $6.1 million.

City Manager Eric Campbell said the city and county split the costs of the local court system, prosecutor’s office and downtown jail 50-50. The city’s contributions to operational costs at Middle River Regional Jail are determined by the number of people that jail holds on its behalf. Finally, the city is in the middle of a 10-year schedule of annual “buy-in” payments of $1.1 million. That’s part of the agreement Harrisonburg and Rockingham County made with the original members of the regional jail authority when the two localities joined.

“We have to fund those things that are required,” Campbell said. “Once [a person] is in your custody, you have to make allocations to make sure that money’s in the budget to take care of them.”

Capital projects, such as an ongoing upgrade to the downtown jail’s HVAC system, are also included in the jail spending numbers. 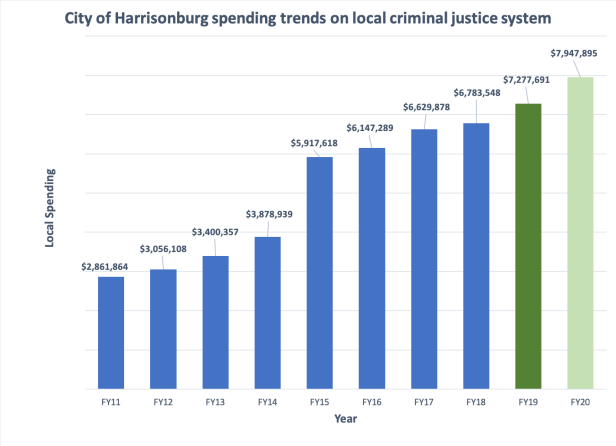 Total spending by City of Harrisonburg on jails, local courts and local prosecutor’s office has risen each of the past 10 years. In FY15, that spending took a jump when the city made its first payment to buy into the Middle River Regional Jail. Since FY16, its first year as a full member, spending on local criminal justice has increased by 29 percent. Figures in the blue columns, through FY18, are from the city’s Comprehensive Annual Financial Report. The FY19 figure is from the current year’s adopted budget. The FY20 figure is from next year’s proposed budget.

“We need the ‘why?’ behind this,” he said. “I’d like to see a breakdown of where the money is going and how it’s being utilized.”

“If the money is being spent in a way that’s providing a positive outcome for our residents, then I think that’s a good thing,” he continued.

At the same time, Romero said he supports proactive measures to reduce incarceration numbers – although he hasn’t been involved in detailed discussions about what those might be.

“I would like to look at how to reform what we’re currently doing in the criminal justice system, because it doesn’t seem to be working for people at this point,” he said.

Romero, who was elected for the first time last November, said he’s still trying to learn about the local criminal justice system and its impact on the city budget. As part of that process, he and Campbell took toured the Middle River Regional Jail last week.

“At the end of the day, we want to make sure that our spending is having a positive impact,” he said.

While some have said they hope the new justice planner – a position created next year in the proposed budget – will help the city control spending on the criminal justice system, Campbell isn’t optimistic that will be the case.

“I think what [that person] will do is give additional information and insight on data analysis,” he said.

“If anything, it will give us more of a roadmap for what we need to deal with,” Campbell added. “I just don’t think one position is going to control that demand and need that the system is putting out there at this point.”

In recent years, the number of people incarcerated by the local criminal justice system has risen significantly along with the city’s spending on them. It’s a situation playing out all over the country, complicated by the fact that no single entity has control over the whole system.

One response being tried in a growing number of communities is the Justice Reinvestment movement. It encompasses policies to control corrections spending by investing in alternative programs that “increase public safety and hold offenders accountable.”

Those could include “a whole host of diversionary resources,” such as accessible treatment programs, drug courts, improved housing options, day-reporting centers and more, said Nancy Insco, the CEO and founder of the Staunton-based Institute for Reform and Solutions, who has consulted on criminal justice reform in hundreds of communities.

“It’s incumbent upon us as a society, as a a culture, community, to be seriously undertaking actions that are going to break the cycle of recidivism,” she said, noting that it’s something much easier said than done. “It is a struggle to know how to turn that corner from housing people in a custody situation to putting more diversion in place and reallocating those budget dollars,” she said.

A member of the Valley Justice Coalition, Incso sits on the local reentry council and the alternatives to incarceration committee of the Community Criminal Justice Board. She complimented local leaders who have begun to explore new approaches.

“We do have drug court. We do have day-reporting. Could those be expanded? Absolutely. … But that takes money, too,” Insco said.

“There is a painful period where developing and implementing strong diversionary programs, and you haven’t been able to reassign individuals from custody into the community yet, so there’s a planning curve,” she said. “But if we never undertake that planning curve, this is never going to change.”