According to a new study by the Pew Research Center, Harrisonburg’s population would have shrunk last year had it not been for international immigration. Instead, the report says, the city was one of nine localities in the state to realize a population increase – quite small, in Harrisonburg’s case – driven entirely by immigration.

The University of Virginia’s Weldon Cooper Center released data in January, however, showing the city’s population actually did shrink last year for the first time in more than 40 years. But regardless of whether Harrisonburg actually grew last year, the high rate of immigration that has been rapidly changing the area for the past several decades appears to be becoming even more significant a demographic force affecting the city.

Hamilton Lombard, state demographer at the Weldon Cooper Center, cautions against reading too much into the Pew report, since it relies only on data from 2017-18. In addition, he said, international migration is the “least reliable population change data the Census Bureau publishes.”

“Most other Virginia cities, such as Charlottesville, Lynchburg, Norfolk, Roanoke and Richmond saw similar rises in the number of international migrants this decade,” he said, in an email to The Citizen.

In Virginia as a whole, the share of population growth due to international migration rose from a third in the 2000s to half since 2010, Lombard added. 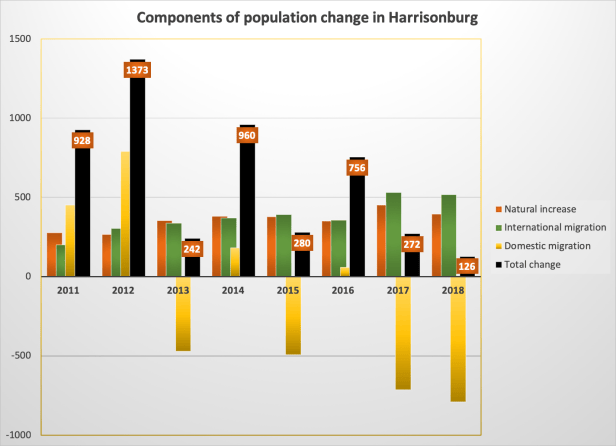 Lombard said the Weldon Cooper Center produces estimates for the use of state and local governments, and relies on some data not available to the Census Bureau, meaning their numbers won’t always match exactly.

The Pew report used Census Bureau estimates to analyze the effect of international immigration on local population change across the country.

“An influx of immigrants prevented or significantly softened population loss last year in more than 1 in 5 U.S. counties,” the report reads. “Immigration either prevented population decline or cut it by at least 10% in those areas.”

Harrisonburg’s population, the report said, grew by 126 people from 2017 to 2018, during which time 518 people immigrated to the city – meaning that without any immigration, the city’s population would have declined by several hundred. (Again, Lombard cautions: “general trends in international migration are likely accurate but I would not rely too heavily on specific figures.”)

According to a 2017 report put out by NewBridges Immigrant Resource Center, the percentage of foreign-born residents in Harrisonburg has risen to over 16 percent, a record-high for the city. For comparison, the national average in 2017 was 13.7 percent. In the ‘50s and ‘60s, foreign-born residents accounted for roughly 1 percent of the city’s population, rising to 2 percent in the ‘80s. Immigration rates began to increase more noticeably in the 90s.

The 2017 report also notes that 35% of Harrisonburg City school students are English Learners (ELs). Although ELs are not necessarily immigrants, those numbers can still be a helpful indicator. Data provided by Jeremy Aldrich, director of testing and world languages at Harrisonburg City Public Schools, shows that ELs have accounted for between 40 and 45 percent of all students enrolled in the city schools for most of the past decade. This year, that figure stands at about 43 percent.

“We are proud to be a place where families of many types want to come because of the quality of education and the positive community we have here,” Aldrich said, in an email.