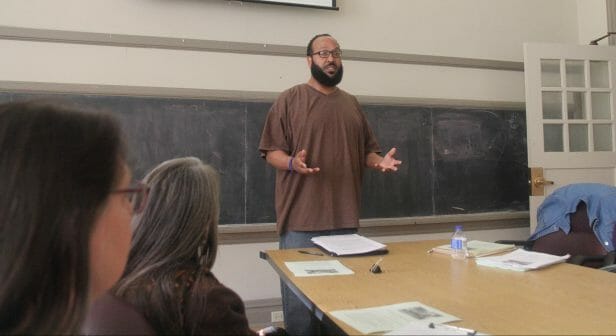 Charlotte Harris was in the custody of local law enforcement in Rockingham County on March 6, 1878, when a mob seized her and hung her from a tree – the only documented lynching of an African-American woman in Virginia’s history. The next month, a grand jury in Harrisonburg ended its investigation of the murder without returning any indictments. Judge Charles T. O’Ferrall, who oversaw that investigation, went on to become governor in the 1890s.

Steven Thomas of the Northeast Neighborhood Association, or NENA, said “these interconnected and obviously interrelated aspects of the parties, the people and the institutions involved in the lynching of Charlotte Harris” point to an obvious site for a historical marker commemorating her death: Court Square.

Thomas is also on the Harrisonburg-Rockingham Community Remembrance Project Committee, which formally launched its efforts to memorialize Charlotte Harris just over a year ago. He spoke about the project on Thursday evening at the Northeast Neighborhood Association’s monthly meeting at the Lucy F. Simms School.

Although Harris’s lynching attracted national media attention at the time, the story disappeared from mainstream historical accounts. It gained new attention in 2017 with the creation of Racial Terror: Lynching in Virginia, 1877-1927, a website detailing research led by JMU professor Gianluca DeFazio into the 104 documented lynchings in Virginia over that time period. Earlier this year, the site published a detailed account of Charlotte Harris’s lynching and its aftermath.

“The lynching of Charlotte Harris is not ancient history,” Thomas said. “As most everyone here knows, we live in a time of increasing incidents of racial terrorism, driven largely by white supremacist organizations and individuals, and it is important to keep in mind that our community is not immune to this type of potential violence.”

Support for a public remembrance of Charlotte Harris from local government sends the message, Thomas said,  “that we are dedicated to remaining a welcoming and safe locality where the human rights of all of our residents are valued and protected.”

The remembrance project committee plans to memorialize Charlotte Harris in several ways, including the placement of a state historical marker. That will occur in collaboration with the Dr. Martin Luther King Jr. Memorial Commission, which is now working with the Virginia Department of Historical Resources to place markers at lynching sites across the state.

The committee also plans to retrieve a monument to Charlotte Harris now at the National Memorial for Peace and Justice in Montgomery, Alabama. The memorial, a project of the Equal Justice Initiative that opened in 2018, includes more than 800 steel monuments representing each county in the country where a racial terror lynching occurred. Adjacent to the memorial in Montgomery is a six-acre plot of land that contains identical monuments, “waiting to be claimed and installed in the counties they represent,” according to its website. That process of returning monuments to their home communities – including Harrisonburg and Rockingham County – will begin later this year.

Thomas said he expects it will take at least a year before either the historical marker or replica monument from Alabama are placed in or near Harrisonburg.

“We know that this is going to be a long process … but we are determined to see it through to its very end,” he said. 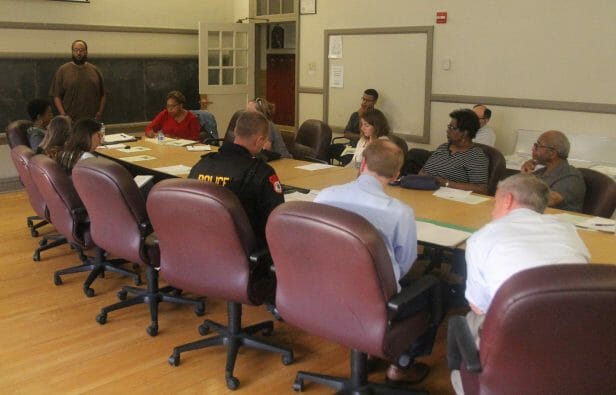 Members of the Northeast Neighborhood Association discuss the placement of a marker and monument to lynching victim Charlotte Harris.

In the meantime, Thomas said the committee will formally ask the county, which owns Court Square, to allow either the historical marker or the steel monument to be placed there. The remembrance project committee might ask for the other memorial to be placed elsewhere, although that has not yet been determined, Thomas added.

“They’ve been very guarded about that,” he said.

After Thomas’s presentation, many of the roughly two dozen people who attended spoke publicly about the need for more conversation in the community about its history of racial terrorism.

“I see Charlotte Harris as a person who is reaching to us across history and is opening a door,” said Carole Nash, an archaeology professor at JMU who has studied historic African-American communities in the area.

Jacqueline Walker, a retired JMU history professor, called the remembrance of Charlotte Harris’s death “the tip of the iceberg” and noted that very little is known about who Charlotte Harris actually was.

“There’s things we need to know about her,” said Walker. “What apple cart did she upset? Why was she lynched? Why her?”