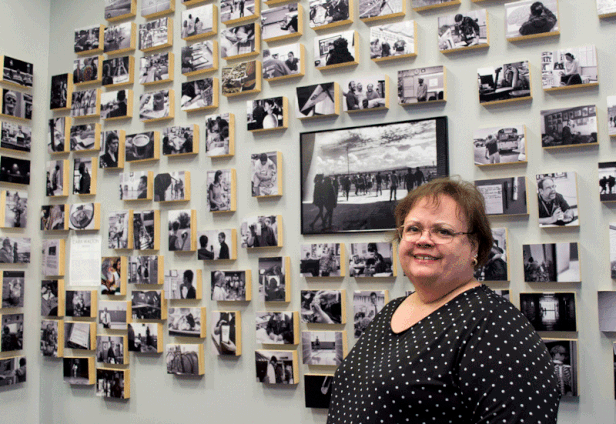 Cynthia Prieto, whose five-year tenure at the helm of Harrisonburg High School is coming to an end,  stands by one of her favorite places in the school – an art installation in the high school’s main office. The photos are part of an exhibit by one of the school’s social studies teachers, depicting daily life at the school.  (Photos by Randi B. Hagi)

When Prieto arrived, 50 kids swarmed to give her a group hug. They had held the picnic in her honor, as Prieto had announced her retirement earlier this year.

An educator for 34 years, Prieto has been at the helm of Harrisonburg High School for the last five. During that time the school has grown to 1,860 students from about 1,460, causing classes to spill out into auxiliary trailers and some teachers to pack their supplies into mobile carts in lieu of their own classroom.

Prieto confirmed to The Citizen that the school district offered this spring to reassign her to a different position, prompting her decision to retire.

“I’m not interested in reassignment,” Prieto said. “I’ve never worked so hard. There have been times I’ve been overwhelmed, but this is the best job in the division. So I have no interest in any other.”

Prieto said she “can’t speak to” why she might have been given a reassignment because she said she has never had a one-on-one conversation with new superintendent Michael Richards “to talk about the school, to talk about our programs, [or] to talk about my trajectory.”

Richards said while he would not comment on confidential personnel matters, he has met with principals both individually and in groups in a variety of settings.

“Cynthia Prieto was well-liked, hard-working, and dedicated to Harrisonburg’s students. I thank her for her service to HCPS and wish her the best in her retirement,” Richards said.

He said he intends to use a diverse interview team and research-based hiring practices to choose the “most effective candidate” from a “rich and diverse” applicant pool.

“Effectiveness has to do with developing a culture of high academic standards and student-centered learning as well as an emotionally and physically safe environment where all students feel welcome and supported,” Richards said. 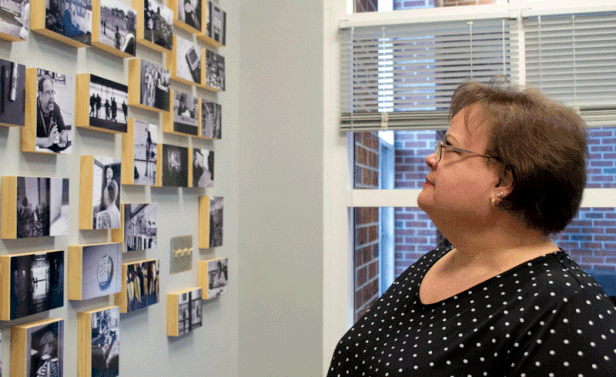 Five years ago, Prieto packed her bags to move to Harrisonburg.

She had spent the first 29 years of her career in Fairfax County, beginning as a Spanish and math teacher. Prieto was an assistant principal at Lake Braddock Secondary School in Burke, Va., when another assistant principal told her about the job opening in Harrisonburg.

“What do you know, a month later I was scrambling to pack up my home and head on down the highway. And absolutely no regrets. These five years have been the most stimulating and satisfying,” Prieto said.

Individual communication with—and investment in—the students has made the high school an exceptional workplace for Prieto, she said.

“We don’t give up on students,” she said. She cited an example of one 22-year-old, who has a young child and is graduating this year.

“We’ve created a situation in late night school where she can not only get assistance with childcare, but also the necessary teaching to finish,” Prieto said.

In fact, Prieto said she relishes leading the graduation ceremonies, like the one last weekend. She asks the graduates to stand as she reads out their accolades – those who have served in the National Guard, those who have invented something that has been patented, those who speak multiple languages, those who have done community service – on and on until every student is standing.

Seeking to give students ‘a voice’

“I am very open with our kids, so I said, ‘OK, let’s talk about senior prank. You can’t vandalize anything, you can’t humiliate anybody, it can’t cost anybody anything, you have to clean up after yourself. After that, I challenge you – be funny! Be creative; don’t be mean.’ ”

Prieto also helped facilitate a learning experience out of a planned student walkout.

In November 2016, 80 students marched from the school to Court Square in protest of anti-immigrant rhetoric from then president-elect Donald Trump and others across the country.

When Prieto received social media pressure to preemptively shut down the march, she called the organizers into her office.

“I got ahold of the leaders, and I said, ‘What’s your plan? Because you have to have a plan.’ ” Prieto said that she couldn’t endorse the march, but she wanted to “help them have a voice” in a constructive way.

She also asked the students to schedule the march in the afternoon so that it wouldn’t interfere with as many classes.

The leaders, some of whom were the children of immigrants, told her they wanted to give their parents a voice “because they didn’t have one … this was when we were very impacted by the travel bans and DACA.”

“That was a huge success,” Prieto said.

Two years later, Prieto received a note from a parent of a marcher, thanking her for “changing the course of my daughter’s high school because she felt like she mattered.”

The change in leadership, of course, comes in a time of transition. The second high school, slated to open in fall 2022, is being designed now with stakeholder input.

“I think it’s exciting,” Prieto said of the new high school, adding that relationships, equity, and access needed to be preserved when dividing students between the two schools.

“They need to be very strategic, so that we don’t divide the community [into] haves and have-nots,” she said.

Prieto also said that dividing the students into two schools will double the number of leadership opportunities and the amount of teachers’ attention available to the kids. And she said she looks forward to a new principal “coming in and adding to the strengths and talents that we have here.”

In the meantime, Prieto said she’ll still be around – serving on the board of the Community Foundation, crossing travel destinations off her bucket list and maybe co-authoring a book.

Prieto said she measures her legacy as a principal not by test scores or GPAs, but by the personal growth of those around her.