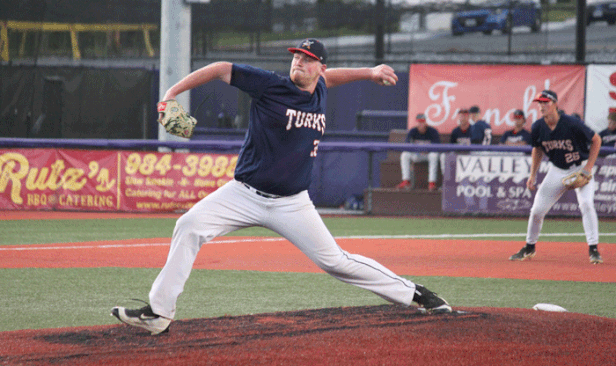 The Harrisonburg Turks’ Eli Ellington, a left-handed pitcher out of UNC-Charlotte, is one of the Valley League All-Stars playing in Sunday’s game at Harrisonburg’s Veterans Memorial Park. The game starts at 7:30 p.m. (Photos by John Leonard)

John Leonard has been writing a regular baseball column for The Citizen this summer. You can find much more of his writing on his website, All Things Valley League.

Last Saturday afternoon, officials from 10 of the 11 Valley League teams huddled in a dark banquet hall at the Southern Kitchen in New Market to hash out decisions that could potentially change a college player’s life: who would appear in Sunday’s Valley League All-Star Game.

The sometimes gut-wrenching culling process of determining which players earned a spot and who would be left off has real consequences for those who have Major League dreams. Many of the 30 franchises send scouts to look for the next star to come out of the Valley League, like alums Mo Vaughn and Juan Pierre — two long-time big leaguers who will be inducted into the Valley League Hall of Fame this year.

In fact, during the 2018 All-Star game, I sat next to the scouts’ section and witnessed a surprising reaction. Usually, scouts sit stone-faced, watching the action but rarely reacting. They might jot down notes but betray nothing on their faces — like seasoned poker players. But in this game, a Harrisonburg Turk, right-hander Rafe Schindler, was on the mound. He fired a slider — a breaking ball that snaps away from right-handed batters — that broke so far and so fast that the scout sitting closest to me turned to his companion and mouthed the word, “Wow!” That pitch, by itself, might be enough to get Schindler some chances later in his career.

So team reps — all but Front Royal sent emissaries — trooped down the stairs into the vast, almost entirely black banquet hall and started the two-hour winnowing process. Each team was allowed to nominate one “guaranteed” player, and then make their best case for others to make the 25-player roster for each division in Sunday’s game, which starts at 7:30 p.m. at Harrisonburg’s Veterans Memorial Park.

In the end, 25 players from each division were chosen to appear in the All-Star Game, scheduled for Sunday, July 7, at 7:30 p.m. in Harrisonburg. Here are eight players worth watching for in Sunday’s game (Stats are through Tuesday, July 2):

Jose Aquino, SS, Purcellville (San Jacinto North):
Originally an outfielder, Aquino is a shortstop this summer. Even battling through some wrist soreness, Aquino leads the league in home runs with eight and boasts an impressive slash line (batting average, on base percentage and slugging percentage) of .348/.408/.685 in 89 at-bats. “Jose’s a big kid, absolutely chiseled, and he has a rocket for an arm, which helps make up for his lack of experience at shortstop,” Purcellville Head Coach Brett Fuller said. “He will most certainly be drafted. No one will sneak a fastball by him.” Aquino has proven he has thunder in his bat. 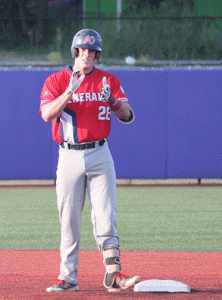 Wes Clarke on second base after a double.

Wes Clarke, C/1B, Waynesboro (South Carolina):
It’s rare for a true freshman to make an impact in the Southeastern Conference (SEC), but Clarke started the last ten games of the Gamecocks’ season, including conference tournament games. Waynesboro coach Zac Cole described Clarke as an all-around player. “First of all, he’s a high character kid who works his butt off,” Cole said. “He’s a big, powerful, strong kid. It just sounds different when he hits it. We’ve been impressed with him so far this summer.” Clarke ranks fifth in the league in batting average, and is hitting a total of .397/.548/.667 at this point in the season, along with 20 walks and only seven strikeouts. He would be my choice for Most Valuable Player if the season were to end today.

Andrew Czech, 1B, Staunton (Walsh University):
“He just goes about his business very maturely and professionally,” Staunton coach Tyrie Blalock said. “He doesn’t let a bad at-bat bother him into the next at-bat.” Czech, perhaps the biggest man in the league this year at 6’6”, is hitting .354/.454/.677 in 99 at-bats, with a ridiculous 23 runs scored and 35 RBIs. He is second in the league in runs, first in RBIs, first in doubles (with 11), and is only one home run behind Aquino.

Tre Dabney, 3B, Front Royal (JMU): Dabney is new to the league, appearing in his first game on June 20 after recovering from a minor knee injury. But he collected hits in six of his first seven games, including multiple hits in three of them. “Tre is a hitter with power to all fields,” said Tony Hurla, Front Royal’s coach. “He’s an extra base threat at any time and runs well for his size. He has good hands and plays well at third for us. He’s made a difference in our lineup since joining the team.” Dabney also will be right at home playing at Veterans Park, JMU’s home field.

Eli Ellington, LHP, Harrisonburg (UNC-Charlotte):
“He’s throwing pretty hard — 92, 93 mph as a lefthander,” Coach Bob Wease said about the 6-foot-5 rising junior. “He’s done a great job for us. You can look at him and see a future major league pitcher.” Ellington has excelled at missing bats, having struck out 38 batters in 21 innings pitched. Ellington leads the league in both ERA, at 1.28, and strikeouts.

Thomas Francisco, 1B/3B, Charlottesville (East Carolina):
Francisco immediately had an effect when he joined the Tom Sox a few weeks ago. “He’s obviously been swinging it pretty well. He’s a guy in the middle of the lineup that is going to give you a quality at-bat every time he’s up there,” Head Coach Corey Hunt said of his left-handed hitter. Thomas has done nothing but rake in his 43 at-bats, putting up a .442/.468/.512 batting line so far.

Aidan Nagle, OF, Woodstock (Lewis-Clark State):
“He reminds me of Daniel Murphy,” Coach Mike Bocock said, referring to the Colorado 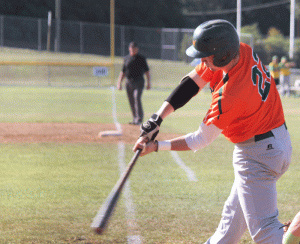 Rockies infielder and Valley League alumnus. “He’s just a natural hitter.” Being compared with an 11-year veteran major leaguer might be daunting to some, but Nagle, from California, has the laid-back demeanor to handle it. He’s also been one of the best hitters in the league since he first stepped on a Valley League field — he started his season with a 17-game hitting streak. Overall, he’s hitting .436/.513/.644 in 101 at-bats, with nine doubles and four home runs. He currently leads the league with 26 runs scored and 44 hits.

Jackson Tate, CF, Waynesboro (Alabama):
All anyone needs to know about Tate’s athleticism is that he had Division-I offers to play football coming out of high school — as a safety. His first step is maybe the fastest I’ve ever seen, and that burst helps him in center field and on the basepaths, where he’s stolen six bases so far this summer. Earlier this summer, a Turks player hit what seemed to be a no-doubt double off the bat, but Tate ran it down, making it look easy. He didn’t even need to dive. He has all the tools to become a professional player, and, in fact, was drafted in the 32nd round this June by the Seattle Mariners.

Those eight players — plus 42 more All Stars — will be on display for fans and scouts alike Sunday at JMU’s Veterans Park, all trying to be the next Daniel Murphy or show off a slider that makes scouts say “wow.” Festivities, including batting practice, the 60-yard dash, and home run derby, begin at 3 p.m. The game starts at 7:30 p.m.