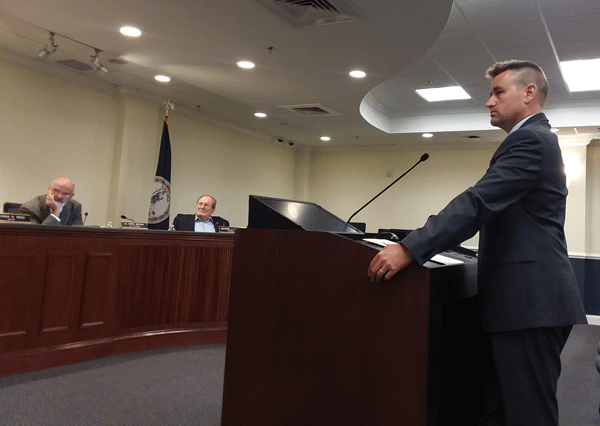 Adam Fletcher, director of planning and community development, outlined the city staff’s recommendations about the latest batch of short-term rental applications at Tuesday’s council meeting. (Photo by Randi B. Hagi)

The group of city-approved short-term rentals continues to grow in Harrisonburg, as the city council approved eight of nine such special use permits in a meeting on Tuesday evening.

This was the second city council meeting during which these permit applications were reviewed since the council established the permitting process in March. The council approved the first three applications last month.

On Tuesday, the applications the council considered prompted discussion about whether certain areas of the city are more appropriate for operating Airbnb properties or other short-term rentals. City staff, represented by Director of Planning and Community Development Adam Fletcher, recommended denying four of the nine applications. Ultimately, though, the council approved three of the four.

In those three cases, the staff’s reasoning for denying the applications included the properties being situated “deep” or “wholly within a neighborhood,” Fletcher said. “There could be disruption” to other residents who don’t want businesses to operate near their homes.

Council member Chris Jones disagreed, saying that any short-term rental that becomes a nuisance can have their permit reviewed or revoked by city council.

“I want to paint a scenario,” Jones said before describing a hypothetical character  — “Uncle Roscoe” — who comes to stay with relatives who live in the neighborhood. He takes up a parking space, he smokes cigars, and maybe he ends up “barbecuing at 2 a.m.,” Jones said.

“I do have an Uncle Roscoe!” Mayor Deanna Reed joked. “I do feel like the special use permit … keeps people accountable.”

“As long as we have the option to cancel if there are problems,” council member George Hirschmann added.

Council member Richard Baugh noted that the permitting process “is still very much a work in progress,” but neighbors are made aware of the application and can come to the council with concerns.

Vice-mayor Sal Romero, who also serves on the planning commission, was absent from Tuesday’s meeting.

As the approvals continued throughout the meeting, Fletcher said city staff would consider the council’s directions when making future recommendations.

The final permit application was the most contentious.

After a long discussion, the council voted unanimously to table the decision until Romero was present to offer insight into the planning commission’s unanimous vote against the application. The city staff also recommended turning down the application.

This application, made by David Lee for a property on Nelson Drive, was different from the other eight in a few ways. The house is Lee’s second home, whereas all the others were the primary residence of their owners or of a long-term renter who would be present during the short-term stays. As such, Lee applied to rent out the entire home, rather than just a few rooms. Also, Baugh recused himself from voting on the application.

In the application Lee offered to only rent it out for 182 days per year, and to have the permit expire after 10 years. Lee said that his family “use[s] the house frequently,” and would continue to do so between renters.

This application was also the only one that drew concerns from a neighbor, who said during the public comment period that his “phone was blowing up” with texts from other opposed residents on the street.

“Let’s just say he’s not exactly telling the truth about how often he’s there … from my observations and the observations of multiple neighbors,” the neighbor said.

Council member George Hirschmann said he wanted to have Romero’s input before making a decision, prompting the council’s vote to table the issue.

Four downtown business owners and representatives, joined by Lois Jones, director of the Massanutten Regional Library, spoke during public comment about the behavior of a group of people who prompted concern from area businesses and contributed to the closure of Denton Park.

“We’re dealing with a crime issue downtown,” said Tim Brady, owner of Pale Fire Brewing. He said he’s seen the problem discussed as homelessness and affordable housing. “All of those are very important issues,” he said, but his specific concern is with a group of people committing crimes. Brady called for “increased police presence downtown.”

Lois Jones said in the weeks since Denton Park closed, the library has seen a “big decrease in the traffic” from the group who had exhibited concerning behavior.

English also cautioned against a disproportionate concentration of officers downtown, which could worry residents.

“It’s not going to fix itself overnight,” Reed said. But she said she is working on possible solutions, including a community fund to donate to rather than giving money to panhandlers.

“Let’s be careful that we’re not lumping everybody into the same category,” she added.

Editor’s note, July 9, 2019: Reporter Randi B. Hagi recently joined the board of directors of Our Community Place, one of the local organizations that helps low-income residents and people in Harrisonburg experiencing homelessness.