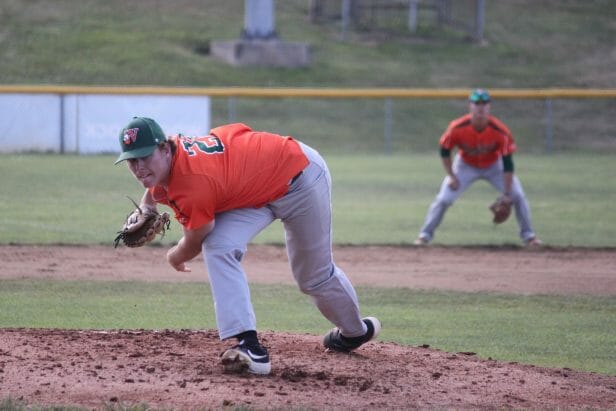 Tristen Bayless of the Woodstock River Bandits was the 2019 Valley League Pitcher of the Year. All photos by John Leonard.

After Friday night’s incredible Valley League playoff game between the Woodstock River Bandits and Strasburg Express, in which the Express punched their ticket to the finals in an 11-10 barnburner, I headed to South Central Pennsylvania to spend a little time with my parents.

Saturday afternoon, returning to the Valley, I stopped in Mount Jackson to fill up my tank. Coming out of the station, wearing my Valley League hat, I ran into one of the Woodstock players, who was on his way home to Hampton now that the River Bandits were eliminated. I was surprised for a second, as I was reminded that these college players scatter to the wind within days of season’s end. Sometimes, in fact, they pack up and head for the hills the very evening of their last game. But those of us who run teams (or write about them) stay here in the Shenandoah Valley.

While many players have already headed home, and as we wait for the league to crown a champion (which could happen as early as Tuesday night), let’s take a look at some notable achievements from the last eight weeks. 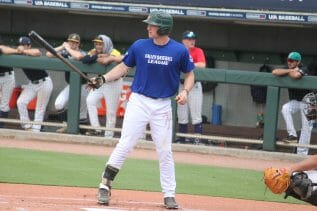 The first person on this list needs to be Woodstock’s Aidan Nagle, a rising junior who played at Cuesta College last year and will attend Lewis-Clark State College this fall. Nagle, just named the league’s Most Valuable Player, got at least one hit in his first 17 Valley League games, quickly serving notice that he would be a force to reckon with. The lefty-batting outfielder hit 10 doubles and 11 home runs, becoming the third player in the last six years to reach double figures in both stats. Add in a slash line of .406/.492/.675 in 160 regular season at-bats, and it’s clear to see why he was named the MVP.

Nagel’s teammate, lefty Tristen Bayless, from the University of Houston, was named the league’s Pitcher of the Year after finishing the year with three wins, a 1.92 earned run average, and 50 strikeouts in 32 ? innings pitched. However, even with that impressive 13.8 strikeouts-per-nine-innings, his best two innings were probably at the Prospect Showcase in North Carolina, when he took the mound against the Southern Collegiate League, and blasted through two innings in front of major league scouts, striking out all six batters he faced in rather dominating fashion. The rising senior most likely helped his draft stock quite a bit. 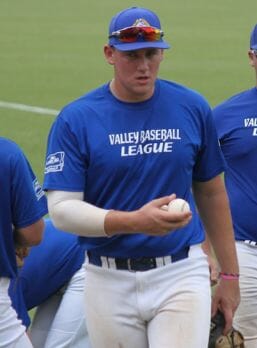 Andrew Czech of the Staunton Braves.

Staunton’s Andrew Czech, from Walsh University and All-Valley League at first base, was an RBI machine this summer. He drove in 47 runs in the regular season, and then added five more in the playoffs for a total of 52, becoming only the sixth player to reach that total in the last 15 years. Czech left the Valley to join Cotuit in the Cape Cod League about five days ago, and drove in a run in his second game there, of course. Czech left before the Braves’ season was over because the siren song of going to the Cape – which generally has a higher caliber of prospect and more scouts in attendance – was just too tempting.

Waynesboro’s coach, Zac Cole, associate head coach and recruiting coordinator at Andrew College, led the Generals to a franchise record .738 winning percentage, and record-tying 31 regular season wins. Cole has spent the past four summers in the Valley, and has won 104 games as a head coach in that time. He was named the Mo Weber Coach of the Year, and like many of the young coaches in the league, is an up-and-coming coach in college baseball.

While Nagle’s hitting streak was impressive, Charlottesville’s Thomas Francisco, from East Carolina University, had an even longer streak. After arriving on June 21 and rapping three hits in his first game, Francisco kept on hitting until July 22 – a full 23 games later. He was named first team All-Valley at designated hitter, with a league-leading .412 batting average.

Through July 12, Front Royal’s Dylan Menhennett, from the University of West Florida, was hitting .274/.355/.406. Over the next six games – coincidentally his last six of the summer – he went 16-for-30 at the plate, with nine runs scored, seven doubles, two home runs, and eight RBIs. He raised his slash line to a final of .331/.395/.544, all thanks, allegedly, to a golfing outing with his father the morning his streak started. He was exhausted heading into the game, but his dad’s frantic search for some pineapple to help his son recover was successful, and Dylan could do nothing but hit doubles and home runs from that point.

While New Market Rebels weren’t a great team at the plate – they hit .257/.363/.359 as a team – boy, could they run. The Rebels led the league with 101 total stolen bases, a whopping 36 more than the next closest squad. Joshua Cox, from Louisiana-Lafayette, led the team with 24 stolen bags, and Jonah Seagears, from Virginia Tech, had 21.

Covington’s Logan Amiss, from Virginia Commonwealth, also topped a .400 batting average in the regular season. Finishing just behind Francisco for the batting title, Amiss hit .410/.475/.590, and was named second team All-League at catcher. The rising sophomore’s batting average is in the top seven from the last 15 Valley League seasons. 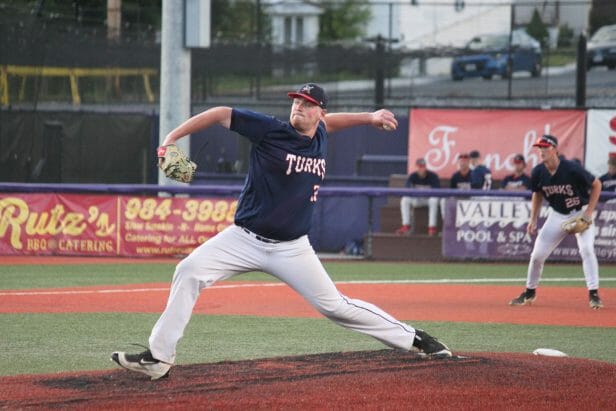 All-Valley second-teamer Eli Ellington of the Harrisonburg Turks led the league in strikeouts in 2019.

Last but not least, the Harrisonburg Turks sported a sort of reverse murderer’s row; the staff included, at various times, five premium arms. The Turks didn’t make the playoffs, but their pitchers made batters rather uncomfortable. Jacob Ferris, from Eastern Kentucky, went 3-1, 1.98, with 32 strikeouts and only six walks in 31 2/3 innings pitched. Eli Ellington, from UNC-Charlotte, went 1-1, 2.31, and led the league with 54 strikeouts in 35 innings. UNC-Greensboro’s Austin Koehn went 3-1, 1.80, with 24 strikeouts in 25 innings. Eastern Kentucky’s Will Brian struck out 42 batters in 35 1/3 innings, and Alex Hoppe (pronounced “hoppy”), also from UNC-Greensboro, showed a fastball with some hop, striking out 39 batters in 26 2/3 innings. Ferris and Koehn were first team All-Valley, while Ellington and Hoppe were named to the second team.

So while most of these young men have returned home for a short rest before returning to college, some of their performances will be remembered for years to come. And, of course, if any of them begin a professional career, and, perhaps, work their way up to the Major Leagues, we’ll be talking about that summer they were in the Valley, dodging thunder storms and putting up impressive numbers.