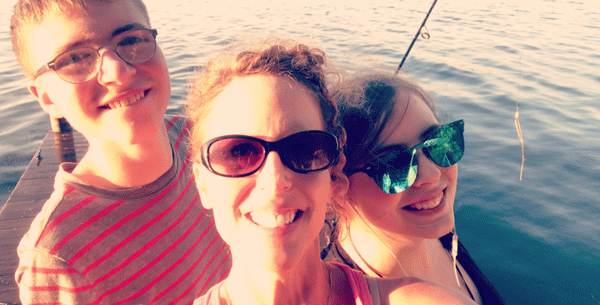 Lynda Chandler, center, with her children Valor (16) and Honor (14) Capaccio. Valor, who has autism, starts high school this fall alongside his sister. (Photo provided)

Oliver Stephan is a 17 year old who enjoys biking, has a knack for algebra, and recently studied cell biology with a local college graduate. He also has a non-speaking form of autism, so he communicates in other ways – he spoke to The Citizen by pointing out letters on a board to spell out sentences.

“I hope other kids like me get the chance to have the education they deserve,” he said.

Oliver is homeschooled by his mother, Christine Stephan. He has attended the city schools off and on in the past, but withdrew for the final time last year.

As of 2016, the most recent year statistics were available from the Virginia Department of Education, 99 students enrolled in Harrisonburg City Public Schools had autism or an intellectual disability – 1.6 percent of the total student population of 6,188 that school year.

Lynda Chandler, co-chair of the Shenandoah Valley Autism Partnership, said the trend of students with autism leaving the traditional schoolhouse to have school at their home is most pronounced for high school students.

“Most of the parents that I know that have students with autism that are older decided to homeschool their kids,” she said.

The reasons to homeschool are as individual as children, but common themes can be heard among the parents of students with autism: the schools did not have enough resources to meet their kids’ needs — especially because of the crowded high school — and their children were too segregated from their peers.

Overcrowding in schools presents a variety of problems for students with intellectual or developmental disabilities. Harrisonburg High School was built to accommodate 1,360 students. It now holds 1,800 — until the new high school relieves the congestion in 2022, if it opens as scheduled.

That number of students in a too-small facility poses specific challenges for students with autism, many of whom might find the environment overstimulating.

“I can tune out the conversation over there, the music, the buzzing in the background, but my son can’t. He takes in everything,” Chandler said.

Not to mention, the more students there are for teachers to keep track of, the harder it is to catch bullying in the act.

Chandler said she plans to keep her son, Valor, in the public school system. He starts high school in the fall.

“I’m a single, working parent. I don’t have the ability to homeschool my child, so I need the school system to step up and provide an education for him,” she said.

Sandi Thorpe, director of special programs for the Harrisonburg City Public Schools, said the district operates under the philosophy that “all students benefit from inclusive setting and being educated with their peers.”

“Educational settings are determined by the students IEP team and is dependent on their individual goals,” Thorpe said, referring to Individualized Education Plans tailored specifically for students with special needs.

The Harrisonburg City Schools has been recognized for some of its inclusion efforts, particularly for younger students. Its “Preschool Power Play” program for transitioning 3 year olds with disabilities into the school system is a statewide model, according to the Virginia Department of Education.

The Education Department also last year recognized the district’s “Harmony For All” program that uses music to help students with special needs — a program that also has attracted national attention, as The Breeze reported in 2018.

But by the time some students with autism have reached high school, the sheer numbers and volume level at the packed high school can drown out gains from such programs instituted earlier in their educational journeys.

A goal of full integration

Shortages of resources can also affect children with developmental and intellectual disabilities. Christine Stephan said the high school struggled to support Oliver’s alternative means of communication for him to be able to start his freshman year.

Both Christine Stephan and Lynda Chandler speak glowingly of teachers who reached out to them for advice on how to best teach their children. The problem, they say, is not that educators don’t know or care – it’s that they’re not equipped and some conditions, like overcrowding, are out of their control.

“The system itself does not allow the levels of support that students like Oliver need to have a successful education,” Stephan said.

These students also need certain professionals in the schools to help them succeed. For instance, Chandler recalled the occupational therapist at one of Valor’s former schools delegating tasks to teachers because her student caseload was so overwhelming.

“When you’re trying to take students who maybe have some extra, some of them, significant needs, and put them in a classroom that’s already overcrowded … it’s even more challenging to have students with disabilities fully integrated into the classrooms,” Chandler said.

Thorpe, from the Harrisonburg city schools, said she believes the district is “sufficiently staffed to meet the needs” of students with special needs. She said the district is well within the requirements for funding based on state quality standards.

“We … try to keep teachers at reasonable caseloads in order to do the work meaningfully,” she said in email. “We continue to work towards budgeting and growing a well prepared and qualified staff in order to help all students be successful.”

The call for even more inclusion

Christine Stephan has been a vocal advocate for “inclusive education,” a model for special education in which students spend most of their school time in classrooms with other, non-disabled students their age.

“He just wants to go to school,” she said of Oliver. By the last time she decided to homeschool him, she said he was only attending school for two hours per day. And he was still segregated from his peers for much of that time, she said.

“I know we can do better at home,” she told herself at the time. And while it was the right decision for their family, she said she wishes Oliver could have had access to an integrated education – such as what’s being done in at least one school in Waynesboro.

Stephan recently attended a statewide convention of The Arc, a national community-based organization that advocates for and with people with intellectual and developmental disabilities, that was held in Harrisonburg.

Inclusive education was a hot topic at the gathering. The grassroots organization “Including Me in Virginia” was there to help teach Stephan and other local parents how to advocate for inclusive education in their school district.

Heather Denman, executive director of The Arc of Harrisonburg and Rockingham, said the organization “believes that all students should have the opportunity and support needed to receive their education in neighborhood schools with their peers, friends and neighbors.”

Currently, though, state funds only accommodate “restrictive options” for these students, such as placing them in a separate classroom.

“The Arc believes public resources should invest in all options along the continuum of placement possibilities for students with disabilities,” Denman said.

“He’s learning, he’s thriving, he’s with his friends … he has a sense of belonging,” she said. “And that’s our hope for him as his parents as he moves through his school career.”

Gibson said her friends all over the country have warned her, “just prepare yourself … for the fight if you want inclusion.” She intends to enroll him in the dual language program at Waterman Elementary next year.

‘We can accomplish anything …’

Lynda Chandler said time her son Valor has spent with his peers has allowed him to learn to navigate social settings and how to react to different scenarios or tell jokes. But the benefits of such integration, she said, aren’t exclusive to children with disabilities.

“I think integrating everyone into the classroom, that’s kids with disabilities, that’s kids who speak different languages … I think that serves everyone well as we grow into mature adults. Because we realize we’re not a homogenous society,” Chandler said.

And while it might be too late for Oliver Stephan to rejoin his peers at Harrisonburg High School, his mother, Christine Stephan said she still hopes inclusive education could, some day, help other kids in Harrisonburg.

As Oliver put it, “We can accomplish anything when we are given the chance to try.”