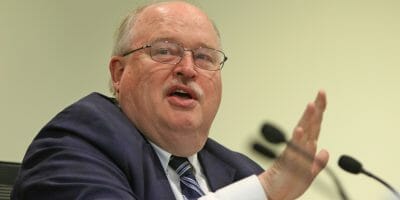 Harrisonburg Democrats will hold a caucus on July 16 to determine the party’s nominee for a special election for a city council seat, and the intra-party matchup will pit incumbent council member Chris Jones against local activist Paloma Saucedo.

Alleyn Harned, the Harrisonburg Democratic Committee’s chairperson, confirmed to The Citizen the caucus date and the candidates after the committee met Monday night. The winner of next month’s caucus will move on to the special election in November to fill out the remaining two years of the seat George Hirschmann vacated at the end of May when he stepped down because of health concerns.

Voters will cast their ballots in the July 16 primary between 10 a.m.-5 p.m. at the Democratic Party’s headquarters on West Market Street.

This caucus represents a do-over for both Jones and Saucedo, who finished third and fourth, respectively, in the June 4 caucus. Jones finished one vote behind Monica Robinson, the president of the Harrisonburg-Rockingham NAACP, while Dany Fleming, the current chair of the Harrisonburg Redevelopment Housing Authority, finished with the most votes among the four candidates.

Jones, when contacted by The Citizen on Tuesday, said he didn’t have time for an interview.

But he told WHSV after losing the June 4 caucus that he was interested in running in the special election to fill out Hirschmann’s term.

Saucedo released a statement Tuesday on her campaign’s Facebook page saying she is “fully committed” and “competing” for the city council seat that Hirschmann left behind.

“I am running because I believe we need to defeat the people who gave us all the problems (and debt) that emerged with the golf course,” Saucedo’s statement read. “The same people who delayed the construction of the new high school for years, who oppose every step we take towards affordable housing, and who supported jail expansion all this time and got us in the mess we have with Middle River Regional Jail.”

This is not the first time Jones and Saucedo have faced each other in an election. They were two of five candidates vying for two seats in the November 2018 election. Saucedo ran as an independent while staking out progressive positions on issues like immigration and criminal justice. Jones and Sal Romero, both Democrats, won the two seats that year.

Baugh opted not to seek the nomination

“I’m a lawyer by trade, and my clients are very important to me,” Baugh said. “If I were to run, it would take away focus from my clients, and I don’t have any plans for the city council beyond helping out when they called me to replace George.”

Baugh previously served on the city council from 2009-2020, when he lost his bid for reelection and after coming in fourth during the 2020 Harrisonburg Democratic Caucus.

Harned said if voters wishing to cast a ballot in next month’s Democratic caucus can’t make it in-person on July 16, they can submit a request for an absentee ballot at the Harrisonburg Democrats’ official website.

“We’re very excited about this fall,” Harned said. “Our first caucus was well received by the community, we’re still building momentum and glad this city is going to be in the hands of people who truly care for their communities.”

Fleming and Robinson are the Democratic nominees running in November for the pair of four-year terms that are up in November. Jones and Vice Mayor Sal Romero, who decided not to run for reelection this year, currently hold those seats.

Virginia Republicans will participate in the statewide primary June 21, but no Republicans have announced an intent to run in the city’s council races this year.

One independent candidate, Marshall Orenic, is running against Fleming and Robinson in November.

A recent graduate of Virginia Commonwealth University's Richard T. Robertson School of Media and Culture, Chip Lauterbach has already been featured in a variety of publications covering Virginia politics and culture. Before college Lauterbach served in the Marine Corps from 2008-2013 with deployments to Iraq and Afghanistan. He lives in Richmond, Virginia.