Editor’s note: Serving in his capacity as a visiting professor in JMU’s School of Media Arts & Design, writer Ryan Alessi introduced each of the candidates and campaign representatives before they spoke to the students at the Eagle Hall leg of the Traveling Town Hall event.

Facing more than 40 JMU students in Eagle Hall’s common room Wednesday evening, Republican U.S. Senate candidate Corey Stewart offered a brief pitch, then opened it up for students to throw it right back at him.

“No softballs,” he said.

“They’ve done everything possible to stop state legislatures from regulating abortion clinics the way other health clinics are regulated,” he said.

It was unclear what specifically he meant by that because in 2011, Virginia’s legislature passed a law that required abortion clinics to adhere to many of the same regulations for hospitals.

“Look, we’re going to have our differences on things. And abortion might be one of them,” Stewart told Ryan.

But for the most part, the students’ questions for Stewart—and the other candidates who participated in Wednesday’s “Traveling Town Hall” event across JMU’s campus—were broad and aimed more at drawing out general positions on issues, such as climate change and the federal deficit. 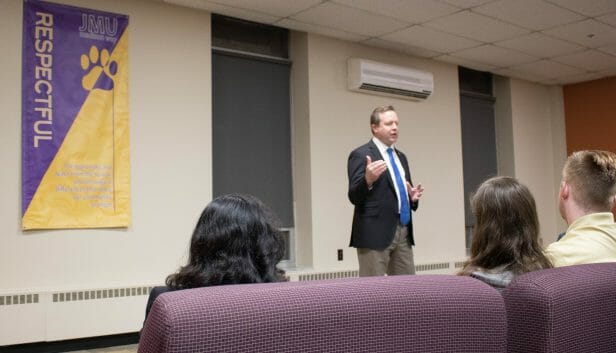 One student, citing the latest Congressional Budget Office report, asked Stewart what he’d do to cut the deficit, which hit $895 billion for the first 11 months of the year. That figure is $222 million more than the shortfall from the same point in the previous year, according to the CBO.

Stewart, who led off his remarks by praising the tax cuts passed last year, said the problem is too much spending because federal revenue is up $19 billion over last year, as the CBO report confirms.

“Where we can really make a big dent is with Medicaid,” he said, calling the program that covers health care for the poor and disabled “hugely inefficient.” Stewart said he supports altering the program to give fixed chunks of federal dollars to each state as block grants, which the states must decide how to spend.

Waters spent most of his 12-minute speaking time outlining ways he says the federal government is overspending.

“This is not a happy talk. I’m not giving you guys candy. I’m not throwing out free 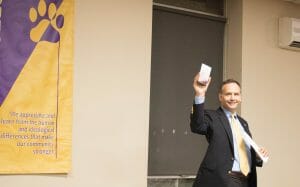 Libertarian U.S. Senate candidate Matt Waters makes a point with his smartphone about the federal debt.

He said Social Security is unsustainable and objects to the expansion of Medicaid under the Affordable Care Act to provide health coverage for working people who make up to 135 percent of the federal poverty rate.

“You have teachers who are striking because they’re not getting pay raises. Why not? Because the government is paying for able-bodied people to take Medicaid,” he said.

Stewart and Waters are challenging Democratic U.S. Sen. Tim Kaine in the Nov. 6 election. Kaine, running for a second term, couldn’t attend Wednesday’s traveling town hall event because of Senate business, including a vote to end the Trump administration’s rule allowing short-term health care plans, which critics have called “junk” plans. The measure failed to pass in a 50-50 vote.

Alleyn Harned, chairman of the Harrisonburg Democratic Committee, spoke on Kaine’s behalf and provided students with a rundown of a host of Kaine’s positions. He left enough time for one question, which came from a student who wanted to know Kaine’s position on gun ownership after Harned touted Kaine’s “F” rating from the NRA.

“Can you explain why that’s a good thing and how I can expect my 2nd Amendment rights to be protected under Tim Kaine,” the student asked.

Harned said Americans’ rights to own guns need to be “balanced with prohibiting or reviewing those who have criminal intent.” He cited people with criminal records for stalking or those on the terrorist watch list as examples. 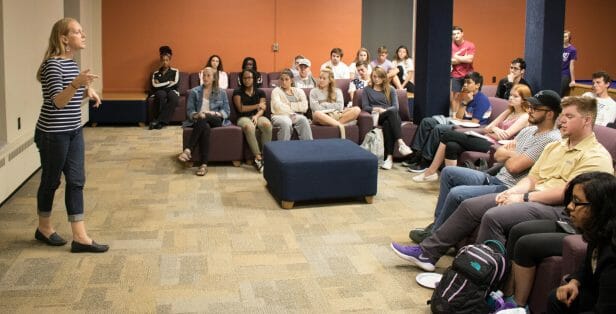 In addition to the Senate candidates, the students at Eagle Hall and, later, others at Shenandoah Hall on the east side of campus, heard from Jennifer Lewis, the Democratic candidate for Virginia’s 6th Congressional district.

Lewis is running against Republican Ben Cline for the open seat being vacated by longtime U.S. Rep. Bob Goodlatte, who is retiring. Cline was invited to the Traveling Town Hall but did not attend.

Lewis highlighted her platform of increasing federal funding “for our most vulnerable people in our community,” including expanding Medicare—the program that covers health costs for retired Americans—to cover everyone. She also said she supports free college tuition to public universities, such as JMU. That led one student to ask how she would cover those costs.

“How are we going to pay for it? Closing the corporate loopholes, ending corporate bailouts,” such as the measure to prop up banks during the 2008 financial collapse, Lewis said. She also said she’d vote to repeal the tax cuts—the ones Stewart had touted—because they “went to the ultra-wealthy.”

The event was organized by the James Madison Center for Civic Engagement and the Dukes Vote organization.

And Evelyn Munsterman, a freshman engineering student, said she appreciated getting to hear the candidates’ views directly.

“I really like that they came to me,” she said, adding that she came into the event with an idea about whom she was likely to support but wants to learn more about each of the candidates now. “This opened my mind up a little.”