As the five city council candidates wrapped up a wide-ranging forum Tuesday that veered from scooters and golf courses to schools and I-81, they had to answer one last doozy: What’s an unpopular decision that must be made for Harrisonburg?

The divergent answers to the final question revealed the competing philosophies and approaches of the five, who are vying in the Nov. 6 election for two spots on the council.

And the answers gave supporters of each candidate—Democrats Chris Jones and Sal Romero Jr. and independents Carolyn Frank, Frank McMillan and Paloma Saucedo—something to cheer about.

Jones, the only incumbent in the group, said he wants to see the city engage with more public-private partnerships like the one that led to Hotel Madison in order to attract more retail developments.

“The unpopular thing to do—don’t kill me when I say it—is take Water Street offline, and we revamp it,” Jones said. “I’d love to see some form of retail plus parking there to move Harrisonburg forward.”

McMillan used his answer to highlight his fiscal conservative platform, saying his idea that might be “unpopular is that I want to maintain and keep a stable tax rate in the city.”

“We need a voice of reason on the council—someone who understands finances and numbers,” he said. “The city is on the commonwealth watch list for cities most likely to default. If we are not careful, we are going to reach that point.”

While it wasn’t clear what list McMillan was referencing, Virginia’s report on fiscal stress of localities ranked Harrisonburg in the “high” stress category with the 19th highest stress score.

Saucedo, who has sought to position herself as the most progressive candidate on the ballot, said “any decision that upsets the power imbalance is very unpopular.” She then listed many of the planks in her platform, such as declaring Harrisonburg a sanctuary city, hiring more people of color as city workers, and building a second high school.

In fact, the high school was a popular answer for different reasons.

Romero, an educator and former school board member, said the community must invest in the next generation of workers and neighbors.

“Even if you don’t have children in the city schools, you will still benefit because these students will be prepared to be out in society,” he said.

On the other hand, Frank, a former mayor, questioned whether a new building was worth the investment.

“I don’t know that fancy buildings make great students. If we could imagine a high school where the community is the classroom, where students master academic knowledge and skills by diving into challenging projects in partnership with local business, tech institutions, civic organizations and non-profits,” she said.

The forum, held at Court Square Theater and hosted by the Harrisonburg-Rockingham Association of Realtors, Shenandoah Valley Bicycle Coalition and the JMU Institute for Constructive Advocacy and Dialogue, attracted more than 200 residents.

Moderator Lori Britt, with the Institute for Constructive Advocacy and Dialogue, spent the spent the latter half of the forum asking questions from audience members, such as the one about unpopular decisions, which followed 45 minutes of questions prepared in advance by the sponsoring organizations. 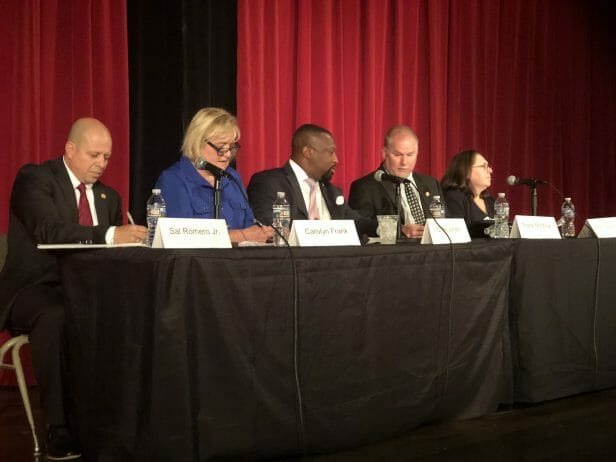 The five council candidates—Sal Romero, Carolyn Frank, Chris Jones, Frank McMillan and Paloma Saucedo—prepare for another round of questions at Tuesday’s forum.

Scooter and I-81 concerns

Transportation issues came up frequently—perhaps not surprisingly considering the bicycle coalition was a sponsor. One person asked about the safety of the motorized scooters for rent around the city, while others asked the candidates if they had plans to address traffic and improve I-81. One resident even floated the idea of a beltway system.

Candidate Frank McMillan, who runs an employment service, addressed the scooters that have been popping up around the city, saying that he liked the idea, but riders should have respect for traffic laws and share the roads.

Saucedo, a social worker, community activist and educator, said while the scooters are great, if they are only accessible to people with credit cards, it only helps those with means and not everyone in the city.

Romero, who currently serves as Family and Community Engagement Coordinator for the Harrisonburg City Public Schools, said an education campaign would help residents know that the scooters were available and how to ride them safely.

Frank and Jones said the interstate issue is more of a state and federal issue.

Jones and Frank already have experience on city council, while Romero, Saucedo and McMillan are running to be on the council for the first time.

One resident asked the candidates which city assets could be sold off to “fund projects and reduce debt?”

Frank said she wasn’t sure how to go about it but would consider selling the Harrisonburg Electric Commission (HEC). While she didn’t think many municipalities owned their own electric commission, she pointed out that the council would have to consider the $5 million it brings to the city every year.

Saucedo received some laughter when she said in response, “Have I mentioned the golf course?” She explained that it would be the first thing she would look into, and perhaps use the land for affordable housing.

“I’m so tired of hearing people say stuff just to get elected,” Jones responded. “Listen, we only have 17.4 miles. We don’t have many assets that we can get rid of. If people were into golf courses, believe me, we would have sold it a long time ago.”

Here are excerpts from the candidates’ answers to other questions:

McMillan: “When we add bike paths to the roads, the roads become safer. When we narrow the road, it slows the cars down, and it allows bicycles and cars to be in the same area…and it’s better for the environment. But the clear obstacle in that is financing. However, we need to stop looking at that as an expense, we need to look at it more as an investment for a sustainable future in Harrisonburg….When you increase quality of life in Harrisonburg, you attract more companies and better paying jobs.”

Jones: “I was texting individuals from the Bike Coalition and they were letting me know about the obstacles they were facing with a walking and biking path…The issue was the land adjacent to the golf course. I said, ‘Why aren’t we using the land that’s on the golf course?’…The only reasons those conversations weren’t had was because of the natural silos between Parks and Rec and Public Works…And now in Spring of 2020, you are going to see a bike path right in the golf course, and it didn’t cost the public any land and saved us money.”

Frank: “I think the obstacles are safety and heavy truck traffic. Some of us have a reliance on cars. When it’s inconvenient to drive, we walk, but we have ample parking. I was on City Council when we made [the] bicycle part of our traffic and safety committee, and they have done an excellent job of promoting biking and walking paths, I want to see that continue.”

Romero: “When I was in the schools as a building administrator, we created some walking to school days, walking Fridays, and creating that culture in the schools is important. The two layers that I see include funding – through grants, through collaborative efforts that we can do through similar groups for funding, so funding is something that I as a city councilman can do.”

Saucedo: “The primary obstacle to the expansion of bike paths is how the city chooses to distribute its resources. We need to be able to expand the biking and walking infrastructure in all areas of the city—not just the wealthier neighborhoods.…Many areas of the city do not have bike lanes or walking paths, and it makes it safe if not impossible.”

How will you balance present needs with long-term benefits?

Frank: “The resources that we need to fund are the police department; we don’t need to train officers to go to other communities…One of the questions we need to be asking is how to bring resources to the city. We have to be attractive and competitive to other communities. You can’t look two or three hours down the road and see what their tax rate is. You have to look to Rockingham County. Rockingham County now has a lower tax rate. If we keep spending like we have it will be much more expensive to live in the city than the county….We certainly don’t want to make the city unaffordable.”

Romero: “The great news is that people want to come to the city. We have a lot of great businesses, universities, and infrastructure that allows for people to want to come live here. We must continue to invest in education because that’s the best investment we can make—and public safety is critical for people to feel safe.”

McMillan: “If elected, I plan to take a long look at where we need to spend our funds. I’m sure there are certain areas where we can relocate and reallocate. I plan to apply an outside the box approach to solutions and hold off on spending money…until it makes financial sense. We need to have those commonsense approaches to the city budget as we do our own personal budgets. We need to work to fix the overcrowding at Harrisonburg High School now – We’ve had councilmen talk about how it’s important to build a school now, but not alleviate the problems today.”

Jones: “Water, education, public works, public safety, those are non-negotiables, social services, the judicial system. I mean, a lot of that eats up the budget. And then a big chunk goes to the public school system. But it would be a great investment to hire a justice planner. Most of the people in our jail are non-violent offenders. With a justice planner we can lower our rate of recidivism. This failed recycling program that we have right now—if we hire a sustainability coordinator, we would be in a position where we had somebody on the spot that was thinking and ready to react when we lost that relationship with [Van Der Linde Recycling] when we had 100% recycling.”