Despite the hazards it might pose to our estimation of old high school friends, despite the fact that it’s no longer been cool for some time now, despite the recent revelation that it knowingly exaggerated the metrics reporting that fueled journalism’s “pivot to video” at the cost of who-knows-how-many writing jobs, and despite the damage Facebook can do to our peace, love and understanding, it’s critical to the success of scrappy little news websites like this one.

Since The Citizen launched just over two weeks ago, nearly 75 percent of our traffic has come directly from Facebook. Twitter, another modern bummer, is a distant second.

So, about a week ago, hoping to increase traffic, grow our social media audience and promote contributor Bridget Manley’s story about the city’s troubled recycling program, I held my nose and paid Facebook $10 to promote our post. Facebook, though, wouldn’t take my money.

As it turns out, The Citizen had gotten caught up in a kerfluffle that began in April, when Facebook—in an attempt to combat misinformation and bad-faith manipulation of public opinion—launched a new program to verify and make public any source of political advertising. The News Media Alliance, an industry advocacy group, responded with a letter protesting the implications of conflating news stories with political ads. One key excerpt:

This treatment of quality news as political, even in the context of marketing, is deeply problematic. You are forcing publishers to make a choice between labeling that is fundamentally counter to who we are and what we do, or to walk back our presence on a dominant platform for news consumption and discovery. This will have the effect of elevating less credible news sources on Facebook, the exact opposite of your stated intent.

Let me pause here to endorse this perspective. The Citizen is independent and unaffiliated, and I hope you’re all very clear on the fact that our stories—whether about #2 plastics or city council candidates or anything else—are not political advertisements, whatever some algorithm might think. (For some more recent analysis of how this is reverberating in media circles, see this piece from the Columbia Journalism Review.)

None of that, though, occurred to me when Facebook’s content filters flagged The Citizen for further vetting before we could promote a story about recycling in Harrisonburg. Instead, I obediently went through the steps to get authorized: sent in pictures of my driver’s license, confirmed my phone number by entering an authorization code sent by text and then, several business days later, confirmed my U.S. residency by entering an ink-on-paper authorization code sent by the U.S. Postal Service. Everything seems to have checked out, and The Citizen is now theoretically Facebook-approved to pay Facebook money in exchange for putting our stories about “politics and issues of national importance” in front of more people. 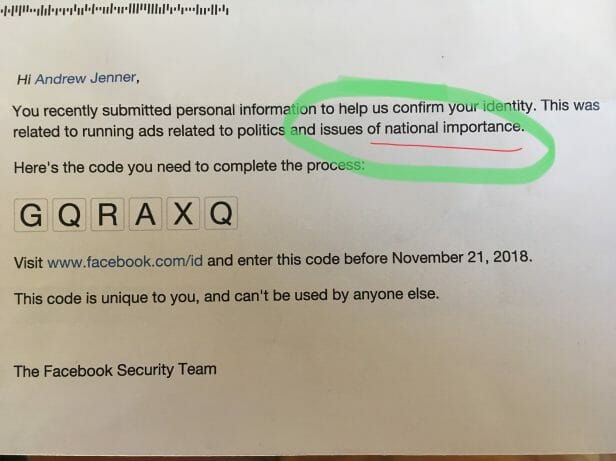 The take-home points, I suppose, are these: The Citizen is a brand-new publication in a big and changing and fraught world; we’ve gone out of our way to become an approved political advertiser on Facebook even though we’re journalists, not political advertisers; and we’re doing our best to cover the nationally important issues bubbling away right here in Harrisonburg, which I’m actually only saying half in jest, because it is all connected, after all. China, it turns out, has a lot to do with why curbside recycling is now simply a fond local memory.